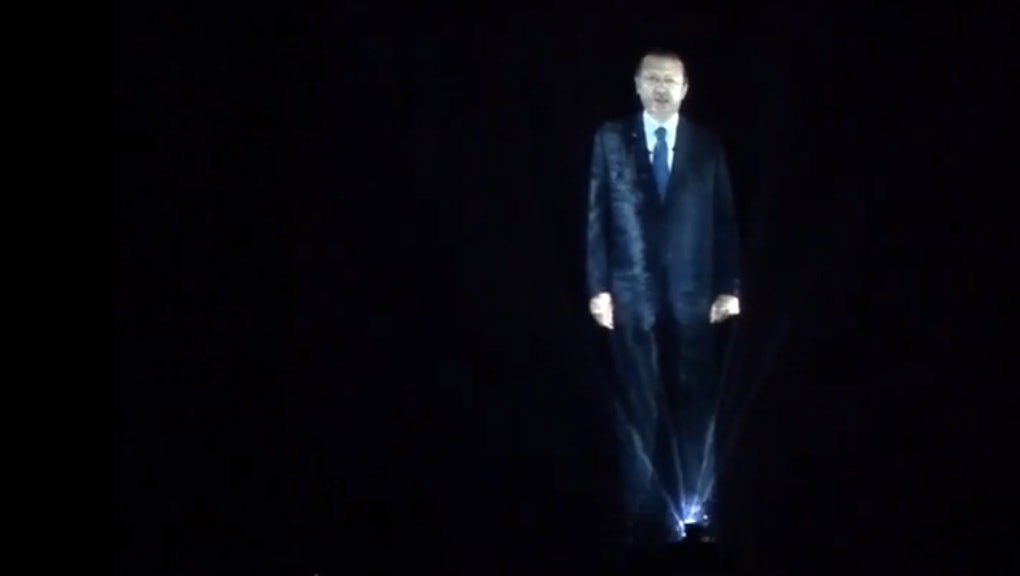 The news: On Sunday, embattled Turkish Prime Minister Recep Tayyip Erdogan joined the ranks of fictional space princesses, deceased rap stars, and CNN talking heads when he opted to give a speech as a towering hologram rather than simply do so in person.

Appearing at a rally for his Justice and Development Party (AKP) that was held in the coastal Turkish city of Izmir, the 10-foot-tall projection of Erdogan discussed the metropolis’ upcoming mayoral election, as well as the ongoing corruption scandal that has rocked his administration since December. Here’s a glimpse of what holo-Erdogan looked like:

The background: The spectral projection of Erdogan served as distraction from Turkey’s equally spectacular, and ongoing, corruption scandal. While Erdogan’s 11-year tenure as prime minister has been a time of great prosperity for Turkey — thanks, in part, to a burgeoning construction industry — his rule has become increasingly authoritarian over time, as he’s both cracked down on freedom of speech and assembly, and sidelined a military long tasked with defending Turkey’s secular democracy.

On December 17, Turkey’s police rounded up more than 50 individuals as part of a bribery probe involving construction companies, an AKP mayor, and the sons of three cabinet members. On January 7, after Erdogan received word that his son could be picked up in the next round of arrests, he began firing police officers and prosecutors, and penning a law that would allow him to shut the investigation down entirely. Erdogan has blamed Fethullah Gullen, a reclusive rival living in Pennsylvania, and the Hizmet movement for initiating the probe.

This is hardly the first time that the construction industry and Erdogan’s restrictive policies have come under scrutiny. At the end of May, plans to bulldoze Istanbul’s Gezi Park ignited widespread protests and police violence, both in the adjoining Taksim Square and throughout the country. Most recently, on January 19, police in Istanbul and the capital of Ankara sprayed protesters with water cannons and tear gas in an attempt to quell demonstrations over increasing government censorship of the Internet.

How he did it: Given the above, Erdogan’s holographic speech is, in more than one way, a feat of smoke and mirrors.

The hologram was most likely presented using an illusion known as Pepper’s ghost, in which the green-screened Erdogan was projected onto an angled sheet of glass; that’s how Tupac’s CG doppelganger made his 2012 Coachella appearance. It could also have involved a thin polymeric projection surface known as a DILAD screen, a technique popularized by hologram and Japanese pop star Hatsune Miku.

On Erdogan’s end, he may have filmed straight on or captured from multiple angles, as reporter Jessica Yellin was back when CNN lost its mind over holography in 2008.

No matter how Erdogan was recorded and projected, one thing is certain: the eyes of the world will remain upon him as Turkey’s corruption probe plays out. With any luck, his commitment to democracy and the rule of law will prove more substantial than the apparition that showed up in Izmir on Sunday night.