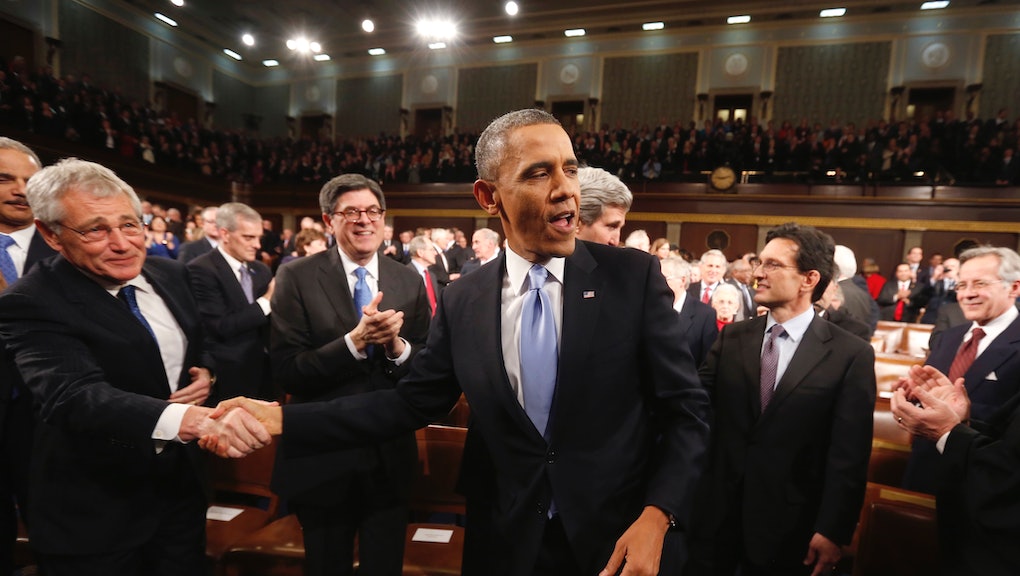 A lot of frustration and even a little panic — that's what I heard from President Barack Obama's State of the Union address on Tuesday. I also didn't hear any new ideas — only higher taxes, more public sector spending and new regulations, with the added caveat that Congress should stop disagreeing with him and rubber stamp these ideas.

Two-term presidents typically don't become lame duck executives until their last two years in office (see George W. Bush administration), but Obama is already feeling like one even before the 2014 elections. That's because he's choosing to be one. As the famous expression goes, when life hands you lemons, you make lemonade. That's what other presidents like Ronald Reagan and Bill Clinton did when they were dealing with House speakers of the opposite party. Obama, on the other hand, is choosing to remain on the campaign trail (as he has for the last seven years) and continues to give speeches and fundraise rather than do his job in Washington and work with Congress — even threatening to act unilaterally rather than negotiate any legislation.

Reagan and House Speaker Tip O'Neill were on opposite sides of the aisle, yet both were willing to compromise and negotiate to achieve wide bipartisan accomplishments such as the 1982 Job Training Partnership Act, 1983 Social Security reforms and 1986 Tax Reform Act. The resulting economic boom in the 1980s led to the highest amount of job creation and Americans paying into the tax system in decades (85% according to IRS data, vs. 50% today).

Clinton and House Speaker Newt Gingrich were on opposite sides of the aisle too, yet both compromised and negotiated to achieve wide bipartisan accomplishments such as the 1996 Personal Responsibility and Work Opportunity Act, 1997 Taxpayer Relief Act and 1998 Workforce Investment Act. The resulting economic boom in the 1990s saw Washington slash federal spending as a percentage of GDP and produced the first balanced budget in decades.

In other words, both presidents met their Congress halfway and made lemonade. They did what presidents are supposed to do: lead on solutions and act like an executive. But Obama has made it clear that he refuses to budge on his agenda. His approval, the economy and the job market are all suffering as a result.

According to Gallup, Obama is currently polling closer to George W. Bush, Lyndon B. Johnson and Harry Truman levels at this point in his presidency, far behind presidents like Clinton, Reagan and Dwight D. Eisenhower, and ahead of only Richard Nixon.

Obama seems to think doubling down on public sector solutions — from more aggressive regulations to more government spending programs — is what will reverse these numbers. Only it's not what the American public wants. According to Gallup, two-thirds of Americans believe the federal government is already too big and too powerful as it is.

Although, paradoxically, 51% chose to re-elect Obama (someone who by no means is interested in reducing the size and scope of federal government), that still seems to be what the majority would rather prefer.

While Obama tried to spin his numbers from Obamacare to unemployment as best he could (even taking credit for "cutting the deficit in half" only after he exploded federal spending via the stimulus), what's even more frustrating is how he keeps the conversation focused on extending unemployment benefits and raising minimum wage rather than on solutions geared towards transitioning welfare recipients off of federal aid and successfully back into the workforce. Even moderate Democrats wished he would've focused more on economic growth (i.e., growing the pie) rather than joining his far left colleagues on the redistributionist rhetoric of income inequality (i.e., the zero sum game).

Indeed, for all the talk that raising the federal minimum wage has received in recent weeks, the truth is only 2.8% of the country's workforce is even on it according to Pew – with more than half of them being 16 to 24. That's because minimum wage is intended to start a career on, not build a career on.

It proves only to be a distraction from this administration's failed economic policies, as does the long exhausted gender gap issue. Here's the other side of "male privilege" that the left ignores:

Now those are some telling stats, especially the workplace fatalities one. What's never taken into consideration in gender gap discussions is that a major reason for the income gap between men and women is due to the fact that many labor-intensive professions that are predominantly held by men — construction, oil extraction, coal mining, truck driving/unloading, electrical power-line installers and repairers, steel workers, lumberjacks and fishing workers — are also more dangerous with higher fatality rates and thus, due to the laws of economics, pay more. This is why you don't start with the end result and work backwards.

But the best explanation I've seen yet for the gender gap is explained in this four minute video from Learn Liberty:

In conclusion, President Obama has a big problem — he's in danger of becoming a lame duck president for the legacy of his last three years in office. According to a recent Washington Post-ABC News poll, 63% of Americans have no confidence that Obama will make the right decisions as president. He can focus his efforts on trying to win back the House in 2014, but as I've already explained, even Nate Silver is predicting that's not likely to happen, as the Democrats won back only eight House seats with Obama at the top of the ticket in 2012. He would be better advised to follow in the footsteps of higher rated presidents such as Clinton, Reagan and Eisenhower, and genuinely come to the table offering concessions to Congressional Republicans instead of dividing Washington further over class and gender warfare rhetoric.

And I highly doubt threatening to unilaterally act and aggressively expand the powers of the executive office beyond its constitutional limits will do much to reverse his disapproval numbers with anyone outside of the far left.