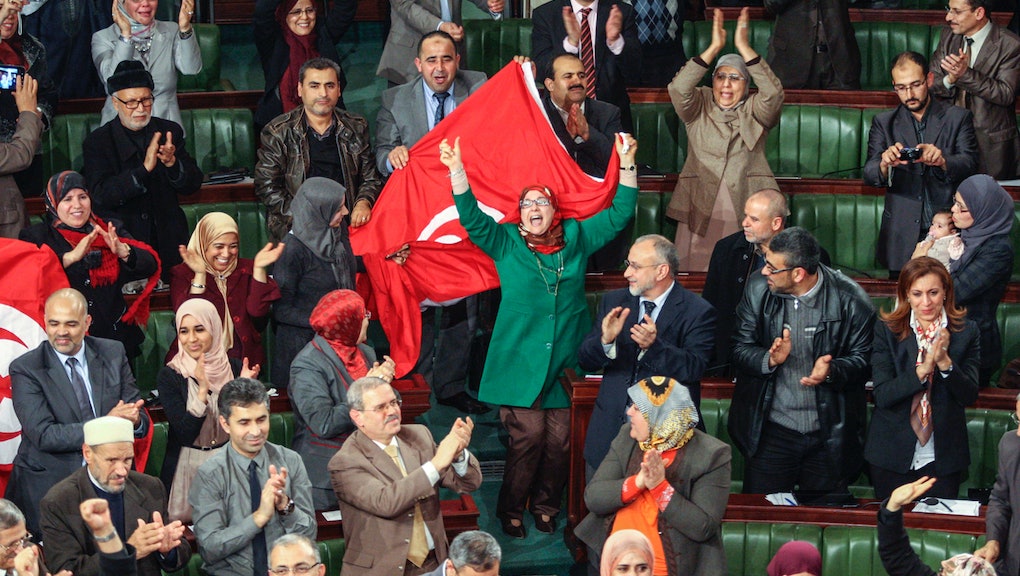 Tunisia's Constitution is a Win For Democracy in the Arab World

On the evening of Jan. 26, in the balcony seating of the historic Tunisian Parliament building – one among hundreds of bodies piled in for the chance of catching a glimpse from beyond the railing – I watched as my Founding Mothers and Fathers voted to pass the first democratic Constitution of the Arab Spring.

Ideological differences evaporated in that immense wave of cheers, song and excitement. Not paying any matter to the tears welling in our eyes, we turned to congratulate each other, family and stranger, friend and foe. I hugged my father and the dear friends who sat by me, and repeated "Mabrouk Alina" – "Congratulations to Us All."

The author with her father.

This Constitution did not mean a success of one political party or ideology over any other; it meant the way forward for all Tunisians, together, and we had all made sacrifices to see it at last realized.

From the start of 2013, Tunisians had grown more anxious and bitter towards one another over the past few months as the democratic transition proved to be more difficult than we had imagined. Difficult economic times, political assassinations and persistent deadlock had weakened the collective spirit, and despairing newspaper headlines of neighboring countries made our own dreams feel less attainable. Everyone continued to struggle each in their own way, but there were grave concerns that Tunisia's transition to democracy could be derailed by the slightest disturbance.

Even before 2013, before a revolution was even conceivable, Tunisians of all shapes and sizes were enduring oppression and repression to no end. The fascinating thing about dictators and their families is that nothing is ever enough, and they are willing to do anything and everything to maintain their power and privilege. Prison and torture without any semblance of due process was the norm, house arrest and exile the best case scenarios, or else tacit complacency by a nation of 10 million taught to keep silent.

Former Tunisian dictator Zine El Abidine Ben Ali in 2009. He was ousted in January 2011, after ruling the country for over 20 years. Image Credit: AP

My family was considered among the lucky ones: my mother's uncles and grandfather sentenced to death for struggling and speaking out against the dictator Bourguiba, my uncle sentenced to five years in prison for being associated with Ennahdha in the 1990s under Ben Ali, and my siblings and I spent 10 summers in Tunisia without our father.

This, as painful as it was, absolutely pales in comparison to the sacrifices of many of my friends and family, whose loved ones either died in detention due to unspeakable torture, missed 10 and 20 years of precious moments with their parents, spouses and children while they rot in prison cells or in exile, or had their family's land or business forcibly taken to stuff the overflowing pockets of the ruling mafia.

Finally, three years ago, building upon the blood, sweat and tears of past generations, Tunisians rose up en masse against tyranny and corruption, destroying the fallacy of "Arab exceptionalism" to freedom and liberty and showing the world that Arabs and Muslims not only appreciate democracy, but outright demand it.

The pride and joy radiating from the Great Hall that night was immeasurable. Tunisians have waited patiently (albeit at times, rather impatiently) for this day to come. Our pièce de résistance, our penultimate revolutionary dream was finally taking shape, and I was alive and there to witness it happen.

What profoundly beautiful and yet trying times we live in, and what better people we will become for it.