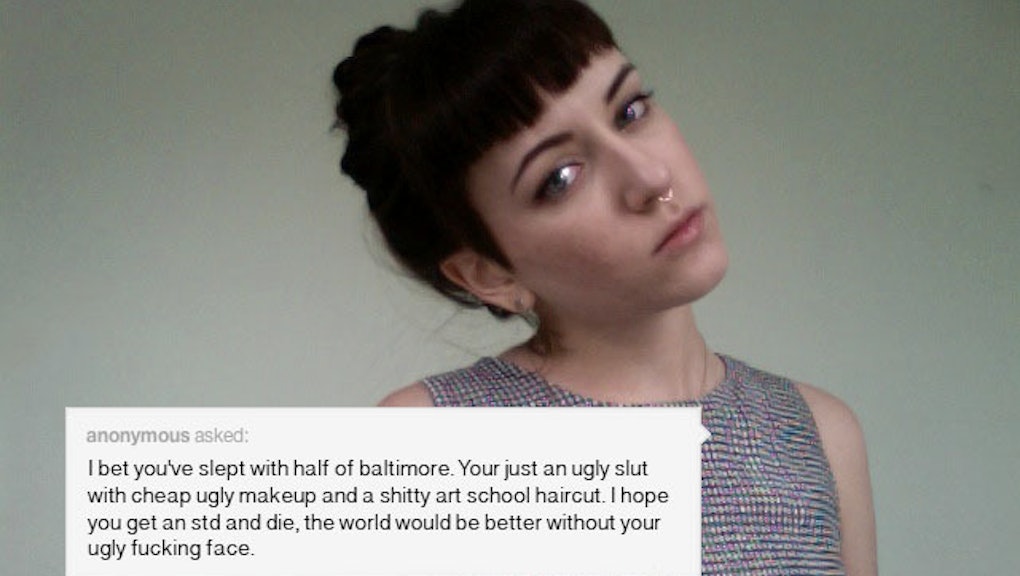 Lindsay Bottos gets slammed with vicious online messages every day. Her crime? The young artist posts a lot of selfies on her website.

Seriously ... that's it. The 21-year-old art student uses her website to post photos of her various projects, which have been described by art publications as "honest and melancholy in the best ways possible." But it seems the Internet would rather attack her for her selfies than appreciate her art.

Rather than let the hurtful messages taunt her from the confines of her inbox, Bottos decided to superimpose them on a series of webcam selfies on her Tumblr page. The resulting project is a stirring revelation of our ridiculous double standards, and a damning condemnation of both sexist online trolls and the objectification women constantly face.

Bottos writes, "I get tons of anonymous messages like this every day and while this isn't unique to women, the content of the messages and the frequency in which I get them are definitely related to my gender ... The authority people feel they have to share their opinion on my appearance is something myself and many other girls online deal with daily."

Bottos is right. The extent of the Internet's harassment of women is staggering — and yes, the level of rape threats and attacks on our bodies constitute some very gendered hate. Bottos has turned that hatred into something meaningful, and her project serves as a testament to the fact that the casual objectification women have to put up with is far from harmless.

For one thing, the constant valorization of beauty carries with it the implication that women's bodies are always fair game for assessment, as it empowers voyeurs to evaluate a woman's worth as a person based on whether or not her appearance conforms to prescribed ideals. As long as beauty remains the ultimate virtue to which women should aspire — and as such remains the main source of a woman's power in the world — it will be the easiest means by which to tear a woman down.

It also reveals the broad assumption that if a woman has the gall to put herself out there, she damn well better be prepared to be picked apart arbitrarily for any supposed physical imperfections, no matter how irrelevant. After all, we really should be more demure; as Twitter recently instructed us, #modestishottest. Or, as One Direction, a boy band beloved by impressionable tween girls, told us in their smash hit "What Makes You Beautiful": "You don't know you're beautiful / That's what makes you beautiful." That message has garnered over 478 million YouTube views. If confidence in our looks isn't pretty, it makes sense that any woman who is secure enough to post selfies is simply asking to be shredded, right?

And if she doesn't fit current societal ideals of beauty, forget it — she has no right to be confident at all. It's like Mindy Kaling told Parade: "I always get asked, 'Where do you get your confidence?' I think people are well meaning, but it's pretty insulting. Because what it means to me is, 'You, Mindy Kaling, have all the trappings of a very marginalized person.  You're not skinny, you're not white, you're a woman.  Why on earth would you feel like you're worth anything?'"

Although Bottos meets many of our expectations of what is beautiful, she also has things like tattoos, mild acne and armpit hair. And because she doesn't seem to think twice about this, people across the Internet feel entitled to invalidate her worth as a human being.

None of this should be surprising. When the media constantly reduces women to entertainment first and human beings second, what did we expect?

This is what happens when we make it acceptable for men's websites to feature tabs labeled "Girls" alongside "Sports" and "Entertainment" — as if we were another piece of content to consume.

This is what happens when supposedly reputable news sites have sections for side boob sightings or crotch shots from women getting out of cars.

This is what happens when, bored by the game, we let the camera linger on a hot girl in the stands at a football stadium (and don't find it odd that her Twitter followers quickly rise by the thousands — by no virtue other than her having a pretty face).

Bottos' project, which has over 80,000 notes on Tumblr, is a small but powerful way of fighting against the ways society continues to degrade and oppress women both on- and offline. Her images show what happens when we just can't seem to move past the idea that a woman's worth is inherently tied to her ability to be aesthetically pleasing to others. Because right now, women automatically become participants in the commodification of the human body — whether we want to or not.