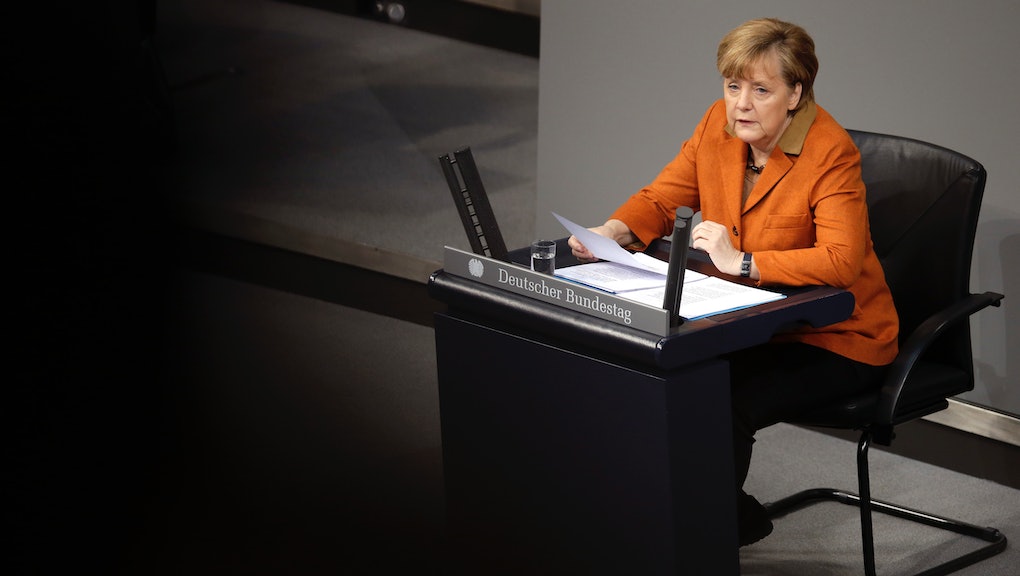 The news: In a major rebuke to the U.S. and the U.K. over their massive surveillance programs, German Chancellor Angela Merkel lambasted the two countries in the German equivalent of the State of the Union, ahead of talks with U.S. Secretary of State John Kerry.

"Actions in which the ends justify the means, in which everything that is technically possible is done, violate trust, they sow distrust. The end result is not more security but less," she added.

Merkel went on to say, "Germany could not wish for a better partner than the United States," but reminded the audience that Germany and the U.S. remain "far apart" on the "ethical question" of surveillance and privacy issues.

"Is it right that our closest partners such as the United States and Britain gain access to all imaginable data, saying this is for their own security and the security of their partners?" she continued.

"Is it right to act this way because others in the world do the same? Is it right if in the end this is not about averting terrorist threats but, for example, gaining an advantage over allies in negotiations, at G20 summits or UN sessions?" Merkel asked, referring to alleged spying at international conventions by the National Security Agency (NSA).

"Our answer can only be: No, this can't be right. Because it touches the very core of what cooperation between friendly and allied countries is about: trust," she concluded.

The background: Merkel is probably right to be so furious. Last year, it was revealed that American agents might have been spying on Merkel's cell phone for more than the past decade.

Revelations of NSA activities have seriously damaged U.S. interests across the globe, most glaringly the trans-Atlantic partnership with Europe. As PolicyMic's Areej Elahi-Siddiqui wrote, "A prime example of that is Secretary of State John Kerry's trip to Europe, where he had went to talk about Syria, Iran and Mideast peace, but instead, spent his time being confronted by the understandable outrage over U.S. spying and quelling the furor of his European counterparts."

Meanwhile, Edward Snowden has asked "how reasonable" it is to assume that just Merkel was tapped, pointing out that if the NSA would go so far as to monitor her communications, it's very likely other European leaders and/or their ministers are under surveillance as well.

Earlier this month, President Barack Obama told German TV that the relationship between the U.S. and Germany must not be damaged "through surveillance measures that obstruct our trusting communication."

"As long as I am the President of the United States, the German Chancellor need not worry about that," he said of the rumored Merkel wiretap.

Why you should care: The NSA issue is big enough that it's seriously damaging our relationships with allies. But given that outrage in the U.S. over bulk phone record collection resulted in only moderate tweaks to the NSA's powers, it's best to remain skeptical of whether systemic reform is actually coming, or if the agency will just end the most visible abuses and push the rest further underground.