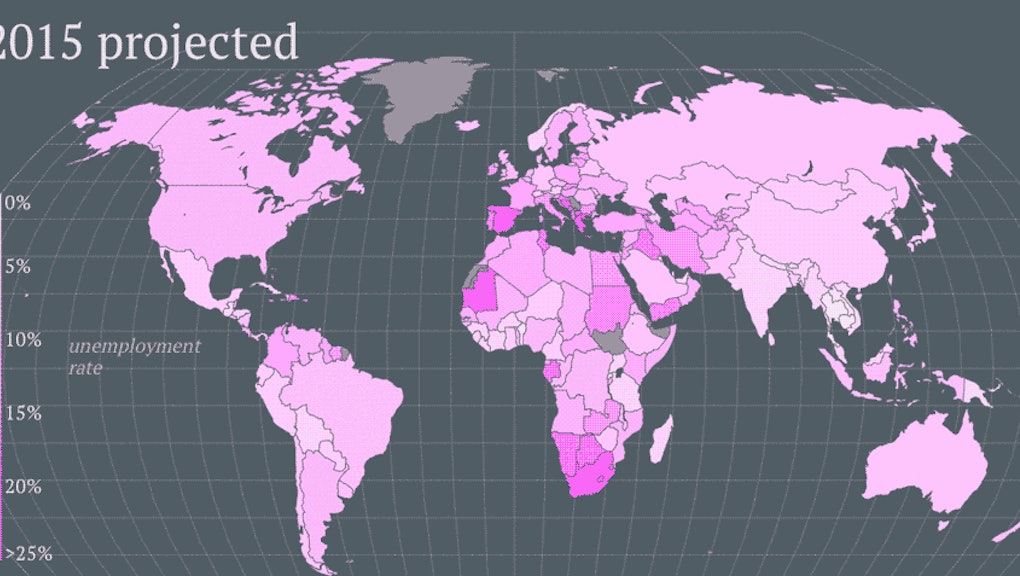 The State Of World Unemployment — Mapped

Courtesy of Quartz and the UN's International Labour Organization, here's what global unemployment has looked like over the past 23 years, as well as what it's projected to look like in just a few more.

Global unemployment hovered around 6% in 2013, with 202 million people out of work. That's an increase of 5 million from 2012. Youth unemployment hovers at 13.1% worldwide, about three times the adult rate of 4.6%. Joblessness remains painfully high in countries such as South Africa, Mauritania, Greece, and Spain, where it exceeds 25%. Ireland is back to pre-Good Friday Agreement 1991 levels, with a jobless rate hovering around 14%.

But other countries are doing pretty well. Russia, for example, went through a nightmarish '90s as the Soviet Union collapsed and "shock therapy" privatization schemes put millions out of work. After the country defaulted in 1998, unemployment shot to a shocking 13.3%. Under Putin, though, unemployment is at a more manageable 5.8%.

The cause: According to the ILO, the results highlight a "potentially dangerous gap between profits and people," as corporations increasingly choose to divert profits to shareholders instead of investing growth in new workers or expanding operations.

Mike Rees writes that while emerging markets have done well, getting through the Great Recession with only moderate hits to their economy, and the richest countries are beginning to pick up steam once more, growth is "unlikely to be enough." Rees says that technological innovations have pushed middle-skilled workers out of their jobs and retraining the jobless remains a challenge.

The idea that growth isn't enough if it doesn't translate into new jobs has supporters in the ILO. According to ILO director-general Guy Ryder, "Corporate profits are up and global equity markets are looking forward to another year of plenty, while at the same time unemployment and household incomes stand still."

"The modest economic recovery has not translated into an improvement in the labour market in most countries. Businesses have been sitting on cash or buying back their own stocks, rather than investing in productive capacity and job creation."

A recent report by Oxfam found that the world's 85 richest people have as much wealth as the poorer half of the world's population.

What can governments do to raise employment? Invest in re-training workers for the right jobs, ease the costs of unemployment, and most of all, make sure adequate public funding for instrastructural, social safety net, research, and other critical programs is preserved. A recent report by Credit Suisse highlighted how destructive austerity programs have been to the European economy: