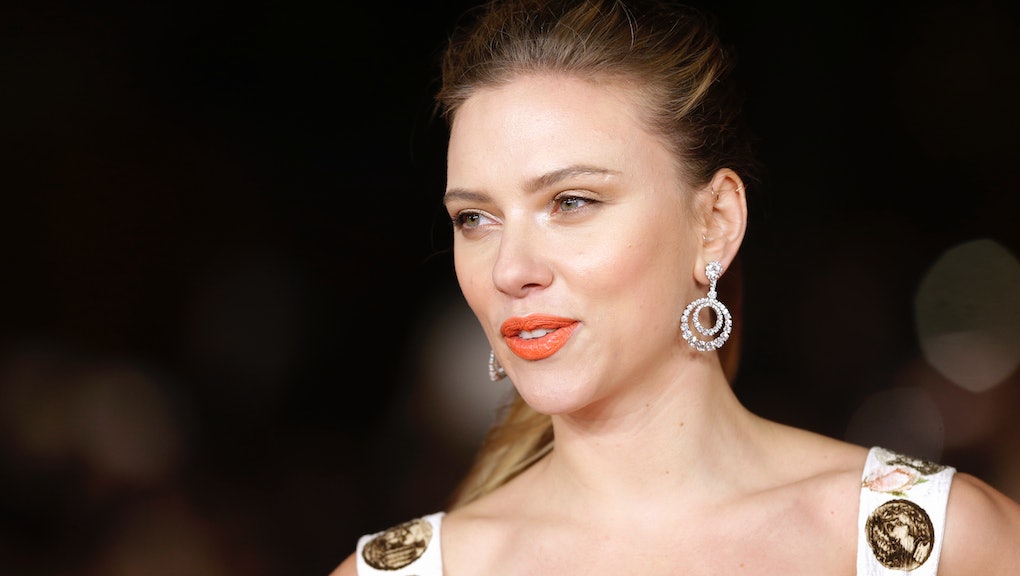 Here's What Scarlett Johansson Doesn't Get About Israeli Settlements

In her controversial Sodastream commercial, Scarlett Johansson is sparkling. In her fluffy white bathrobe and little black dress, she gasps over her healthy, home-carbonated drink.

"My favourite thing about SodaStream," she sighs, "is that I don't feel guilty when I enjoy beverages."

The script, the setting and the choice of star have all been painstakingly chosen. Sodastream has built a brand identity around a glossy kind of ethical consumption, with ad campaigns that focus on the environmental virtues of home-made fizz. Johansson is the perfect celebrity sheen for a conscientious company: she's glamorous, and the fact that she was an Oxfam ambassador added an even greater humanitarian gravity to the association.

That socially-conscious credibility has now imploded. Sodastream operates a factory in Ma'ale Adumim, one of hundreds of Israeli settlement that now cut through the occupied West Bank, seizing the land and resources and destroying the contiguity of a future Palestinian state. Oxfam, unsurprisingly, isn't a big fan of this project: it has urged Israel "to end the construction of illegal settlements," arguing that they make the prospect of a future Palestinian state, "living side by side with Israel in peace and security, look dangerously remote."

Fronting both enterprises, for Johansson, was a clear contradiction. But now she has chosen a side: Sodastream and settlements. Stating a "fundamental difference of opinion in regards to the boycott, divestment and sanctions movement," she has dropped her partnership with Oxfam.

Quite what Johansson's "difference of opinion" might be is difficult to judge. Oxfam doesn't actually support BDS, which targets all Israeli products as a pressure tactic. Rather, it’s only concerned with settlements. As these are illegal under international law, Scarlett may want to take up her disagreement with bodies other than Oxfam.

She won't, of course: The star has evidently plumped for PR fluff and a tidy salary over actually interrogating the root causes of oppression and injustice. Her statement's reference to BDS demonstrates a blinkered refusal to engage with the argument, and echoes the well-worn tactic of portraying a vast range of evidence-based critiques as an amorphous mass of anti-Israel aggression.

Johansson's position places her at the centre of Sodastream's clever occupation-friendly PR effort, which frames the Mishor Adumim facility as an enormous blessing for the Palestinians. In a slick video, chirpy CEO Daniel Birnbaum describes why 900 Palestinian workers should be grateful for the factory on their illegally-seized land, "We give them an opportunity to not only have a job and health insurance," he chirps, "but also social benefits and a very high pay scale which they could never achieve in the West Bank."

The argument is prettied-up with flashier displays. Last year, Birnbaum received an award, and brought along several Palestinian employees to the residence of Israeli President Shimon Peres. There, he made an "unofficial breach of protocol" by insisting on undergoing the same security inspection as his Arab workers. In a speech, he reportedly criticised the procedure, reminding all present they should "remain optimistic that one day there will be peace."

Like Scarlett's cooing over "guilt-free" bubbles, it's a pretty gesture. But Birnbaum appears to have forgotten that the peace he so dreams of is being actively prevented by the settlement blocs where he makes his cash. As he described the blessing of Sodastream's employment packages, it must have slipped his mind that its factory is part of a project that's crippling the Palestinian economy and preventing its people from developing their own opportunities to work and thrive.

Sodastream is able to set up a factory in the West Bank because of Area C: the zone of Israeli-controlled land that takes up 61% of the West Bank. Palestinians are prohibited from building on the overwhelming majority of that land, and some 68% is set aside for the development or jurisdiction of settlements. As these cities expand across Palestinian land, Israel controls movement into, out of, and within the occupied West Bank, exploits the area's natural resources, and retains power over law and order.

These conditions of tight and far from benevolent external control are hardly a fertile soil for the development of a thriving economy. Despite Palestinians being among the best educated people in the Middle East, the West Bank employment rate is just 45%. Last year, a World Bank report estimated that the Palestinian economy could be boosted by 35% if development of Area C were allowed.

Johansson, however, seems to think she knows better. In a painfully ill-informed open letter that preceded her decision to drop Oxfam, she told readers that Sodastream is committed to "building a bridge to peace between Israel and Palestine," and that she is "a supporter of economic cooperation and social interaction between a democratic Israel and Palestine." The actress flaunts Sodastream's carefully crafted façade as a company that does good. Settlements may be challenging, she says, but it's all part of a complex debate in which the benefits potentially outweigh the difficulties.

It is a debate that presents some odd equivalences. Wages for 900 Palestinians justify the fact that the factory perpetuates a violent military occupation. The settlement squeeze on the Palestinian economy is okay because Birnbaum insisted on a security check. And as long as "a greater number of voices" contribute to a conversation about peace, the settlements that actively prevent that solution can thrive and expand unchecked.

In a fair conversation, these absurdities would be rejected. But the spin and skill of advocates for the likes of Sodastream has whitewashed over the inexcusable, structural injustices of their practices with hollow ethical promises, kiss-and-make-up rhetoric and smiling actresses.