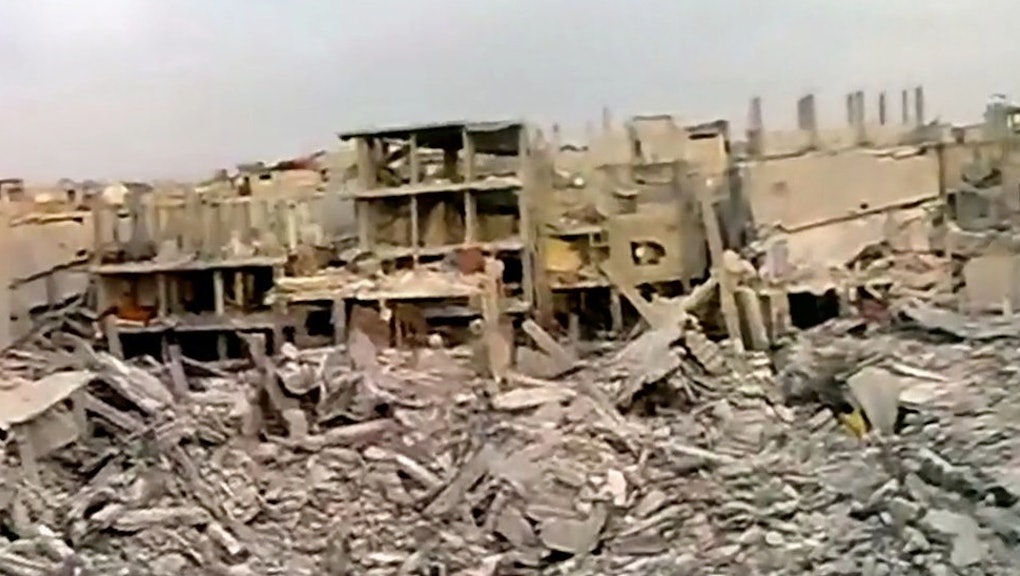 8 Photos of the Neighborhoods Wiped Out by the Syrian Government

According to a new report released by Human Rights Watch (HRW), the Syrian government has been systematically and violently demolishing and leveling entire rebel-held neighborhoods with explosives and bulldozers. From 2012 to 2013, the Syrian government rolled into these areas and demolished roughly 145 Hectares (or about 200 soccer fields) of neighborhoods, houses and streets as punishment for Syrian civilians supporting rebel forces.

"Government officials and pro-government media outlets have claimed that the demolitions were part of urban planning efforts or removal of illegally constructed buildings," the report explains. "However, the demolitions were supervised by military forces and often followed fighting in the areas between government and opposition forces." These facts, along with numerous witness statements and candid reports from government officials, make it clear that the Syrian government acted with malicious forethought when committing these crimesagainst its own people.

"Wiping entire neighbourhoods off the map is not a legitimate tactic of war," said Ole Solvang, emergencies researcher at HRW. "These unlawful demolitions are the latest additions to a long list of crimes committed by the Syrian government."

The HRW analyzed 15 commercial satellite images and interviews with 16 witnesses, along with dozens of YouTube videos (most of which are no longer available), to paint a picture of when and where the demolitions took place and how harmful they were to the areas.

"Human Rights Watch has not been able to find any government statement or decree explaining the reason for the demolitions in Qaboun," the report said. "The first wave appears to have been directly related to intensive clashes between government and opposition forces in mid-July, 2012. The demolitions either served no necessary military purpose and appeared to intentionally punish the civilian population or caused disproportionate harm to civilians."

Along with exposing these unlawful demolitions, HRW suggested that the situation be referred to the International Criminal Court, that the UN Security Council adopt targeted sanctions on Syrian officials who can be credibly shown to have connections to these human rights violations, and that the international community publicly condemn these actions, implementing embargoes on the sale and supply of arms, ammunition and material to the Syrian government if necessary.

According the the report, all of the documented demolitions took place in areas known to be rebel strongholds. No similar incidents have taken place in areas that generally support the government.

Virtually all of the buildings in the neighborhood on the northern edge of Hama were completely destroyed in these short weeks. In the months leading up to the demolition, the area had been the site of numerous clashes between government troops and rebel forces.

At one point described at the opposition's "last stronghold," the government forces pushed rebels into retreat before shelling the neighborhood, resulting in active fires and dense smoke rising from several buildings in the area.

The Mezzeh airport and its surrounding area provided a crucial link between Daraya and Moadamiya, two towns in the Damascus countryside known for being opposition strongholds, making them obvious targets for the government's demolitions. Initially peaceful protests in the area quickly turned violent and in August 2012, the Syrian government launched against the two towns what has since been described as one of the deadliest assaults in the Syrian conflict to that point.

Although the government claimed to be making room for new power lines, their true motives were clear when half of all houses in the neighborhood (about 500) were leveled.

Like in other neighborhoods, the government claimed it was removing "urban irregularities" that made the area ugly and impeded traffic. But this "urban planning" had a short timeline — the Syrian army used megaphones and told the residents they had just one hour to pack their things.

The government tried to justify the destruction of Barzeh by referring to an out-of-date 1960s decree that authorized widening the streets, meaning that any building withing 20 meters of the street was subject to demolition. But buildings safely outside the 20 meter rule were demolished anyway, and HRW was never able to find a copy of the decree.

The Qaboun neighborhood faced two waves of demolitions. The first was in response to what had been called the "fiercest fighting yet" in the capital and led to an army demolition of about 1,250 shops and 650 homes. Other than satellite images, few details are known about the second wave, as no witnesses were identified.