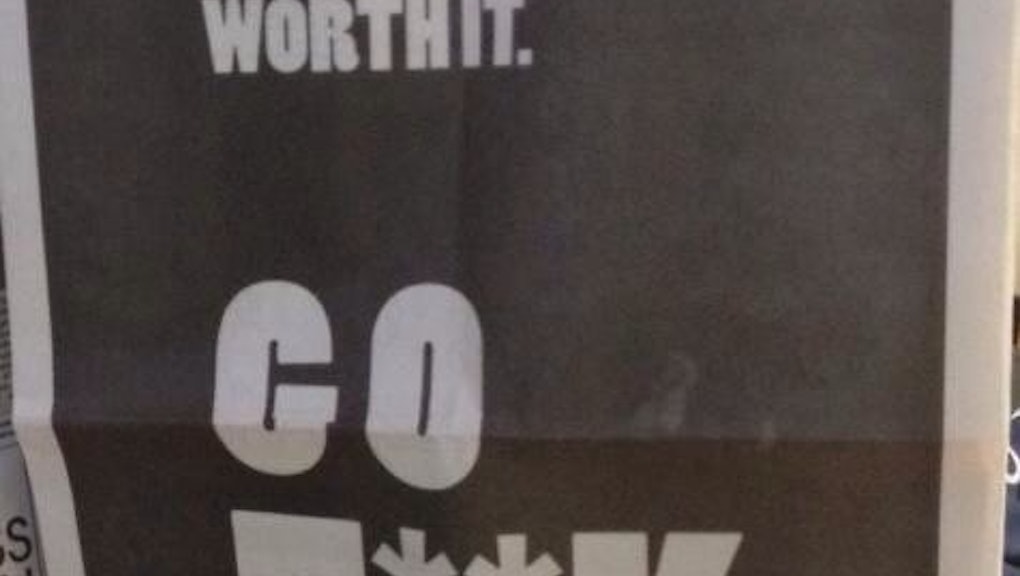 This College Newspaper Ad Went Viral. But Here's the Real Story Behind It.

What went viral: This full-page ad in the Penn State Daily Collegian, supposedly placed by a spurned ex-girlfriend, was trending on Reddit and widely shared on Facebook and Twitter this week:

The Tumblr page in question is apparently run by some kind of stereotypical crazy ex-girlfriend, who's devoted pages of rants, IM screenshots, and cheesy spurned-teen image macros to her cheating boyfriend. Some examples below:

The catch: The whole spiel seems kind of funny at first, but mainly cringe-inducing. And it's not even real.

Daily Collegian editor Anjali Krishnan told The Daily Dot that the ad was actually placed by Capitol Music Group, a major record label behind artists like Katy Perry and Morissey. Strangely enough, they just signed a band called "My Crazy Girlfriend." Their debut single is called "Go F**k Yourself," which, thank god, you can listen to below instead of paying $1.29 on iTunes.

The iTunes page is accompanied by this super-not-at-all-fake-really-guys review:

"Yeah I saw the ad, I had to approve it because it was kind of controversial," Krishnan told The Daily Dot. "It was weird because we got a call for the same ad awhile ago, but from a national agency. But when I tried to ask what it was for, they dropped it. Then we got contacted again by Capitol Music Group and it was for this."

"They also said they wanted to keep it confidential until [the ad] ran."

As noted by The Daily Dot, the bitter ex-girlfriend in question was suspiciously good at tagging her posts to do well on Tumblr searches.

And she calls the song "Go F**k Yourself" "officially my fucking jam" in one of the posts.

The whole thing is notable mainly for its cheap laziness and utter lack of real creativity. Bargain-bin build-a-songs are, of course, far from new to the music industry. But most of the time labels are smart enough to expend their energy on something so stupid it's awesome, so generic it's playable at any club ever, or sometimes cynically calculated to enrage the haters.

"Go F**k Yourself," on the other hand, approaches Brokencyde levels of unlistenable, and its marketing campaign was clearly designed by someone who didn't think too hard about it. (The original post which succeeded on Reddit could have easily ended up in a less-flattering subreddit, like r/cringe.) This kind of viral marketing could be called predatory if it wasn't so feeble and toothless.

Has pop music always sucked this bad? I don't know — I'm 24 and still listen to Bruce Springsteen. (And proud of it, thank you dad.) But Capitol Music Group is definitely leading a Pickett's Charge into the looming demise of the music industry, and if this is the kind of slop they're trying to pass off as pop music, good riddance.