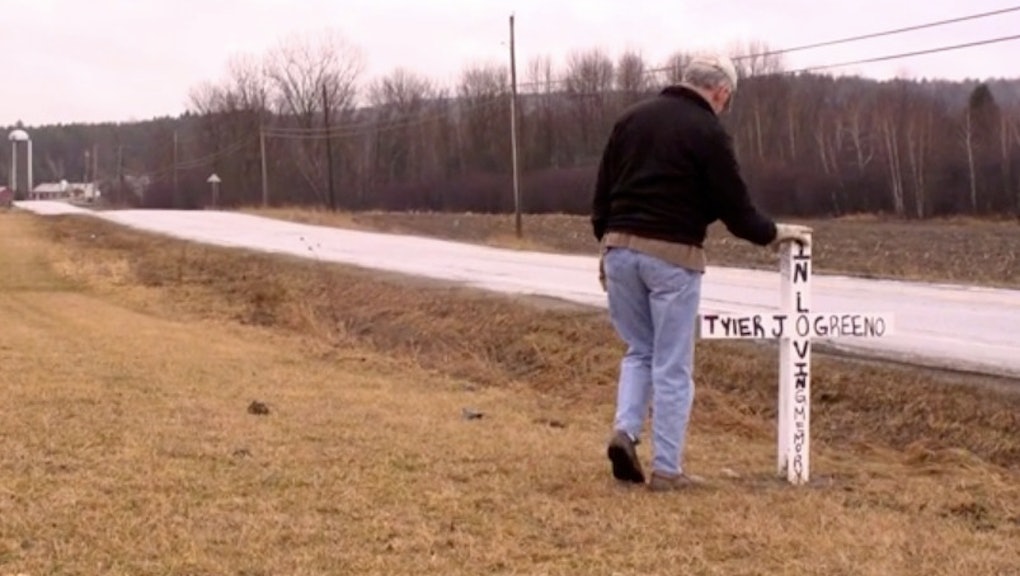 How This Unlikely State Transformed Into America's Heroin Hotspot

Ten years ago, Raina Lowell was 27 years old and living a wholesome life many only dream of. She owned her own business, was married, had a toddler son and a baby girl on the way. The 5-foot-10 blue-eyed blonde, who previously worked as a model, was a "girl about town," she said. She knew everyone and everyone knew her. She had "a million" friends. She frequented parties and events, her picture often graced local Vermont newspapers — the Times Argus, the Bridge, Seven Days.

Unexpectedly, she faced heart-wrenching tragedy. She did have the baby girl, but the baby died upon birth. Lowell refused an autopsy. To this day, she does not know why her baby died. "Nobody should have to survive the loss of a child," she said.

In the aftermath, Lowell grew increasingly angry, even towards her husband, whom she felt was not suffering as deeply. She'd always had terrible anxiety, but the death triggered a much more intense pain. "I wasn't equipped to deal with that grief. I thought it was going to kill me." She insisted they get pregnant again right away, which they did, and their daughter was born the next year.

She doesn't remember exactly when or how — a doctor possibly prescribed it, she thinks — but she took a Vicodin, a narcotic painkiller for back pain. The calming euphoria washed over her; it was an escape, a dangerous savior. "It was like I could breathe for the first time. I felt warm and safe. It became my survival." She easily assured herself that since it was coming from a doctor, it was harmless. It was far from.

"The first time I felt that high, I was done for," she said.

Six years later, she sat in a friend's trailer, "a sad place, dark and depressing." The curtains were drawn, as they always were; no natural light ever shone in. She couldn't do it herself. Her stomach was in knots. She turned away as her friend inserted a needle near her elbow, first extracting blood to establish connection with a vein and then injecting the heroin. "I was plowed over by the euphoria of it hitting my blood stream all at once, and I immediately knew I would never take drugs any other way again."

Her life had deteriorated completely. The once-successful businesswoman, town darling, beautiful blond and loving mother had become a crack addict and heroin junkie. Jobless and divorced, she was living with her two children in a house with no heat in the middle of a Vermont winter. She lit furniture on fire for warmth.

Something was off — not just about who Lowell was, but also about where she was. Vermont is not supposed to be the land of junkies. It's a place of "green hills and sweet vistas," of snow-topped mountains that "rise majestically from the thick forest," as described by the Boston Globe. "It is a jarring contrast — the serenity, the desperation — that has come to characterize a corner of New England many Americans associate with covered bridges and dairy farms."

It's an unfortunate and sad reality. New England — America's clean corridor of clam chowder and bucolic countryside — is not clean at all. In fact, it's suffering greatly.

Image Credit: Fiona Breslin. The map depicts which drug is the most commonly cited among primary drug treatment admissions in the state.

On January 8, Vermont Gov. Peter Shumlin dedicated nearly his entire 34-minute State of the State address to the opiate problem — a "full-blown crisis" — which he said was far more "complicated, controversial, and difficult to talk about" than other state issues.

These are some of the alarming numbers he gave:

- Since 2000, the number of people seeking treatment for opiate use has increased by 770%.

- What started as an OxyContin and prescription drug problem in Vermont has now grown into a "full-blown heroin crisis."

- Vermont has seen an increase of more than 250% in people receiving heroin treatment since 2000. The greatest percentage increase, nearly 40%, occurred this past year.

- In 2013, there were twice as many federal indictments against heroin dealers than in the previous two years, and over five times as many as had been obtained in 2010.

- Last year, Vermont had nearly twice the number of deaths from heroin overdose as it did the prior year.

Situated on an interstate between Montreal, Boston, New York and Philadelphia — major cities where black market drugs are easily attainable — the Green Mountain State is highly susceptible to drug traffickers who know they can sell at higher prices to people who are isolated and desperate for a fix.

St. Albans is a small, rural town of about 7,000 people, not exactly what you might imagine when you think of a heroin hotspot. Sixteen percent of the population lives below the poverty line and 30% of people older than 25 have a college degree — numbers in line with the nation's averages. But this small town offers a window into Vermont's striking rates of opiate addiction.

Filmmaker Bess O'Brien recently produced a documentary titled the Hungry Heart, which gives a sad account of what's happened there. Lowell features prominently in the film. O'Brien said her idea for the film came about after she received a call from 72-year-old local pediatrician Dr. Fred Holmes, who had been running his local practice for 35 years when, in 2006, he received a life-changing visit from one of his regular patients, Kyle, 19 years old at the time.

Holmes had known Kyle since Kyle was a baby. But this visit was different. The teenager told Holmes that he had developed an addiction to opiates and needed help. Holmes had never encountered a case like Kyle's. In fact, he was unfamiliar with addiction altogether. But he wanted to help Kyle, so he obtained his license to prescribe Suboxone, a medication that minimizes cravings and allows opiate addicts to wean off safely without getting sick. But that was only the beginning for Holmes.

Over the next several months, he began receiving a "staggering" number of phone calls from teenagers and young adults across the town also seeking treatment.

He was at a loss. What had happened in his town? How did this happen to these kids?

Holmes treated about 150 people in the years that followed. "Trying to understand the behaviors around addiction is very challenging," he said. "To this day, I'm not sure I understand them at all."

"We all have our vices, but what I have watched over the last couple years is..." he paused. "Sad."

Lt. Matthew Birmingham, the commander of the Drug Task Force for Vermont, said in an interview that starting around 2002, the narcotic painkiller OxyContin hit the market hard and abuse and misuse began to spread wildly across the country. In 2011, the U.S. consumed 81% of the world's OxyContin, even though we make up roughly 4.5% of the world population.

As tighter restrictions were introduced to combat the problem, the price of OxyContin and other prescription pills selling on the black market increased drastically. OxyContin sells for about a dollar per milligram, Birmingham explained. So if you're an addict taking eight 60 mg pills per day to maintain your habit and avoid withdrawal, that's nearly a $500 per day habit.

On top of that, in 2010, Purdue Pharma, the manufacturers of OxyContin, reformulated the drug to prevent it from being crushed, so that it couldn't be snorted or melted and injected. On Purdue's page for OxyContin, there is specific information for Vermont prescribers.

As OxyContin grew increasingly expensive and hard to get, and was no longer crushable, heroin — another opiate that produces the same euphoric effect — moved in to fill its place. The drug is infinitely cheaper. In New York, a bag of heroin (which looks like half of a sugar packet and is generally considered one dose) might sell for just $4.

Birmingham said that heroin hit Vermont hard. "It skyrocketed. And it has now reached unbelievable levels, from a law enforcement perspective." Busting 10 to 20 bags used to be significant, he said. They now have cases where they're seizing 400 to 1,000 at a time.

He said that although "heroin is wildly cheap right now all over the east coast," Vermont is in a unique position as an "end user" state. "We are the end of the supply chain." In other words, people in Vermont are buying the drug to consume it, not to continue trafficking it. The recent prices speak to the market for it. It used to cost $40 per bag. "I just heard today that its $8 a bag. It's as cheap as I've ever seen it in Vermont." The drop in price is a result of availability, and the percentage of addicts "has risen dramatically in the last 10 years," Birmingham said.

Opiate addiction is typically thought of as a distant problem, an illness of two extremes, either plaguing celebrities in bathtubs or dirty junkies on city street corners. Not "regular" people like Raina Lowell, or a kid like Kyle, and especially not in the picturesque, wholesome state of Vermont. But as St. Albans shows, that perception couldn't be further from the truth.

This small town is one of just many others, and a reminder that we need to begin talking about opiate addiction in a way that involves neither glorification nor antipathy, neither glamorization nor disgust. This is a very real problem, and one that can impact or affect anyone.

In her book Painkiller Addict, Cathryn Kemp writes, "I used to think a drug addict was someone who lived on the far edges of society. Wild-eyed, shaven-headed and living in a filthy squat. That was until I became one."

Perhaps the most beautifully written passage about opiate addiction comes in the 1953 novel Junky by William S. Burroughs, a famous writer and lifelong heroin addict:

"The questions, of course, could be asked: Why did you ever try narcotics? Why did you continue using it long enough to become an addict? You become a narcotics addict because you do not have strong motivations in the other direction. Junk wins by default. I tried it as a matter of curiosity. I drifted along taking shots when I could score. I ended up hooked. Most addicts I have talked to report a similar experience. They did not start using drugs for any reason they can remember. They just drifted along until they got hooked. If you have never been addicted, you can have no clear idea what it means to need junk with the addict’s special need. You don’t decide to be an addict. One morning you wake up sick…"

Vermont is struggling, but they're also fighting back and fighting hard. According to Birmingham, law enforcement is — for the first time — working with treatment and prevention centers to combat the problem with "all guns blazing." Elizabeth Gamache, the mayor of St. Albans, wrote in an email, "Instead of ignoring the problem, we've been facing it head-on and working to find solutions."

Gov. Shumlin issued a grant for O'Brien to show her film in every high school across the state. It's awareness and education campaigns like this that will be critical to reducing stigma and tackling the problem.

For addicts, recovery is a lifelong process, but it's certainly possible. As of early February, Kyle — the boy who first walked into Holmes' office — is sober and employed. He is living in St. Albans with his fiancé and their baby, with another on the way.

Raina Lowell is the proud mother of her son, now 11, and daughter, 8. This past Thursday, she celebrated three years of sobriety.

She wants to finish her degree and become an addiction counselor.

If you are interested in having the film screen in your community, organization or school, please contact Bess O'Brien at bobrien@pshift.com. Tweet me with questions or thoughts @lauradimon.

READ: Which Drug is Your State Most Addicted to? America's Drug Problem, Mapped