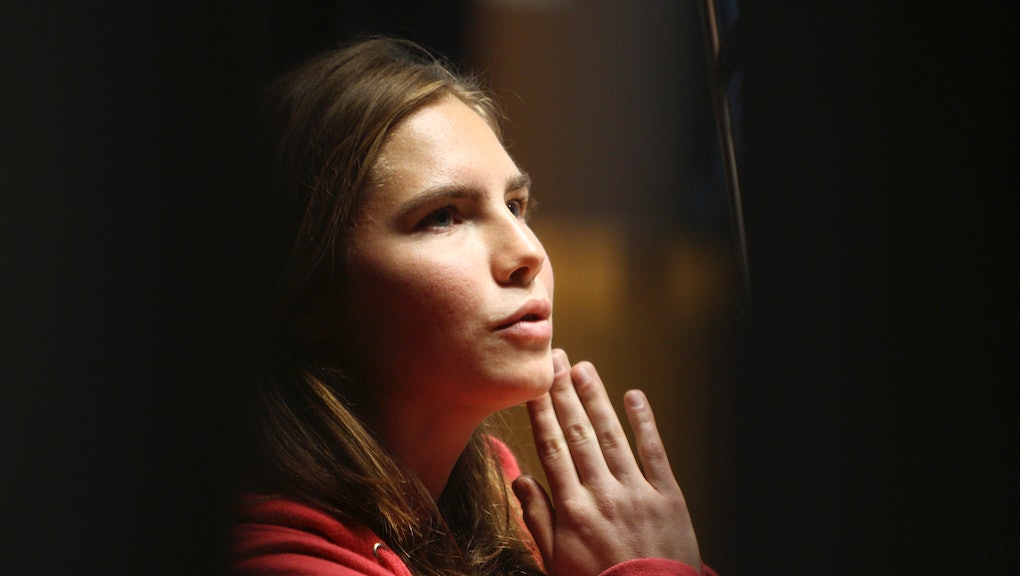 Italian Court Has Found Amanda Knox Guilty Of Murder. So What Happens Next?

News: An Italian court has found American Amanda Knox and her ex-boyfriend Rafaelle Sollecito guilty of the 2007 murder of her roommate Meredith Kercher ... again.

In her third trial, 26-year-old Knox was sentenced to 28 years and six months in prison, while Sollecito was sentenced to 25 years. Both were originally found guilty of the murder in 2009, and handed sentences totaling over 50 years — most of a life in prison. After an appeals court overturned her sentence and ordered a new trial, Knox fled Europe to return home to Seattle.

So is she going back to Italy? Knox is unlikely to spend a day in jail unless she leaves the U.S. for a country with an extradition treaty with Italy. Since the U.S. protects against double jeopardy (being tried more than once for the same crime), it's likely that courts will shield her against being shuttled to Italy to do time.

The trials exploded into headlines worldwide. Knox was widely portrayed in the Italian media as a sex-obsessed party girl, while American supporters did much to secure support against what they saw as wildly sexist and unjustified attacks on her character. The news toted her as "both as a she-devil bent on sexual adventure and as a naif caught up in Italy's Byzantine justice system." And while Americans viewed the case as the result of a shoddy investigation and malicious prosecution, Italians were just as outraged when Knox was acquited, claiming the nation had caved to U.S. pressure.

"I am frightened and saddened by this unjust verdict," Knox wrote in a letter.

"Having been found innocent before, I expected better from the Italian justice system ... This has gotten out of hand. Clearly a wrongful conviction is horrific for the wrongfully accused, but it is also terribly bad for the victim, their surviving family, and society."