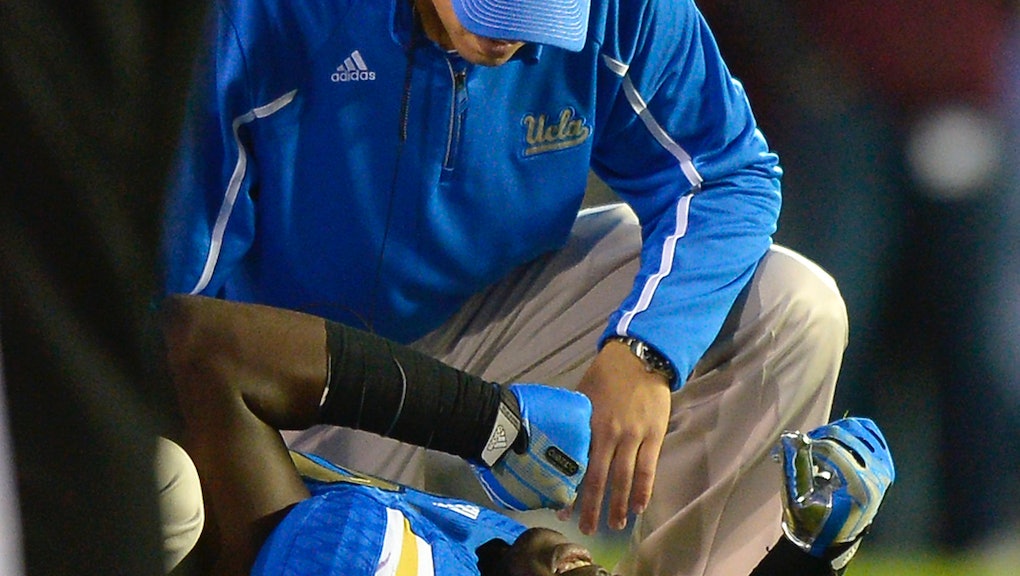 Somehow, in all this talk about forming a labor union for college athletes, nobody is talking about race.

Northwestern University's football team recently took steps toward forming the world's first labor union for college athletes. Yet all is not well: Before the players could storm the Winter Palace and erect a Karl Marx shrine, the NCAA cried foul. "This … attempt to turn student-athletes into employees undermines the purpose of college: an education," said NCAA chief legal officer Donald Remy.

But what if that "education" is a sham? What if players routinely sacrifice their bruised bodies for schools that are failing to teach them? And what if it's worse for black male "student-athletes" than for anyone else?

Let's start with the numbers: Between 2007 and 2010, black men were 2.8% of full-time undergraduates at the schools constituting America's six most successful athletic conferences. They were also 57.1% of football players, and 64.3% of basketball players, making them a sort of "overrepresented minority" in sports arenas nationwide. Nick Nolte elegantly captured this disparity in Blue Chips:

Yet besides rejecting any black man who isn't Shaquille O'Neal, these universities find other ways to remain bastions of inequality. The worst of these are their graduation statistics: 72.4% of the 76 schools studied (with one exception) boasted lower graduation rates for black male student-athletes than for black undergraduate men overall, while among four of those conferences just half of these players (50.2%) earned a degree within six years. Which begs the question: How are they "student-athletes" if many aren't actually completing their education?

Ensuring that black males get the education they're promised is the least these schools can do. Division I programs generate millions of dollars in revenue each year, yet they refuse to pay the players whose labors build their success. This is fine, as long as you accept that a "free" college education that's only sometimes a complete education is fair compensation for torn ACLs, shattered bones, multiple concussions and (I almost forgot) MILLIONS of dollars in profit that the "workers" never see. The only benefit they can reap in that scenario is if they're lucky enough to go pro. And schools aren't even required to cover sports-related injury expenses, which can get pricey even in Obama's America.

What's saddest about this whole thing, though, is the players aren't asking for money: "We're asking for a seat at the table to get our voice heard," said former Northwestern quarterback Kain Colter. The NCPA, which filed Northwestern's union petition at the National Labor Relations Board, lists some absurdly reasonable goals on its website. Among them are to "minimize college athletes' brain trauma risks" (duh), and help "increase graduation rates," partly by reducing the number of weekday games so players have more time to study. And also less brain damage.

These seem like no-brainers (pun intended). And since black male student-athletes are disproportionately represented in the country's most profitable athletics programs — while also facing their lowest graduation rates — they stand to gain the most from unionization efforts. That's why Donald Remy needs to sit down: If anything "undermines" a student-athlete's education, it's not unionization, it's the overemphasis these programs place on sports at the expense of scholarship.

So if the NCAA wants to accurately call its black players "student-athletes," it needs to do better at helping them be, you know, students. Otherwise, chill with the nonsense and pay them a real salary proportional to the profit they generate for you. We know you've got the money.