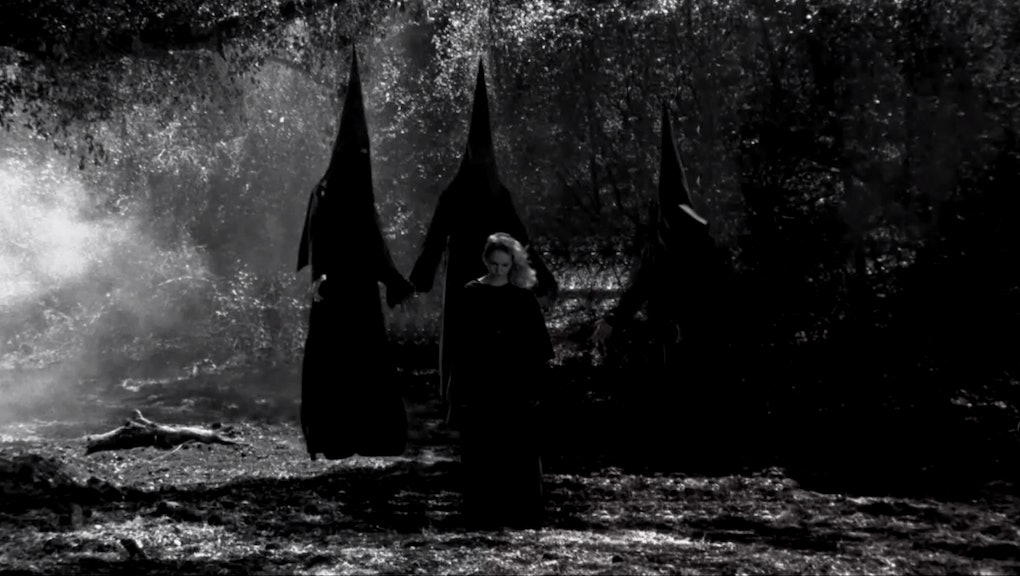 Let's Talk About the Extreme Racism and Sexism of 'American Horror Story: Coven'

American Horror Story: Coven was one small step for witches, and one giant misstep for humankind. The highly anticipated third installment of Ryan Murphy's horror series was heavily watched, and just as heavily criticized. Coven had all of the normal trappings of AHS: brutal violence, creepy sex, great cinematography and Jessica Lange. But the horror got lost amidst all the racist and sexist drama that filled this season.

Coven features a mostly female ensemble, playing the volatile descendants of the Salem witch blood line and their Voodoo enemies. The show centers on Madame Robichaux's Academy in New Orleans, a school for witchcraft where all of the girls from your middle school nightmares get powers and periods.

It isn't enough for the show to follow around the murderous, age-obsessed Supreme witch Fiona (Lange) as she leads her charges into doom. In true AHS fashion, the miniseries decided to muse on a multitude of other morbid ideas (abusive Christian mothers, witch hunters, ghosts, serial-killer ghosts, serial-killer ghosts on the mortal coil, 300-year old racist immortal serial killers, etc.). And apparently, the show wouldn't have been complete without a race war, too.

Watching the season, it becomes imminently clear that AHS is not equipped to handle themes of race gracefully. In fact, in trying to discuss race issues the season falls into many, many moments of blatant racism. For a show that takes place in New Orleans, the choice to venture into Voodoo isn't radical. And it's possible to do a Voodoo versus Salem storyline without being racist, but the way Coven played up every black stereotype made a mockery of the idea.

For one thing, the black and white characters hate each other. To confuse things further, Queenie (Gabourey Sidibe) is an African American student at Madame Robichaux's, which is sloppily explained away as her being a descendant of Tituba. To top it off, her main power is being a "human voodoo doll," which is as racist as a main power could be.

Queenie ultimately takes refuge with Marie Laveau (Angela Bassett), a snake-wielding (racist), turban-wearing (racist), tongue-flailing (racist) woman who is also the sworn enemy of the very Supreme Queenie once followed. Queenie also takes it upon herself to re-educate Delphine LaLaurie (Kathy Bates), a 300-year-old psychotic racist who tortured and murdered 67 of her slaves, by making her watch Roots (such a campy storyline, and probably racist).

To top these ridiculous caricatures off, Queenie works in a fried chicken chain before coming to New Orleans, and Marie Laveau owns a hair salon in the ninth ward. And when sitting in a boardroom about to execute the line of witch hunters that brought them together, Fiona orders a dirty martini while Marie orders a Sprite. That speaks for itself.

As if this weren't enough, the show creates a pretty deplorable depiction of women on the whole. This is all the more ironic given that many initially praised this season for the feminist merits of creating meaty roles for older actresses. But Coven comes out of the gate with what is basically the most sexist thing a man could dream up about a fictional coven of witches: One of them can kill men with her vagina. Seriously. Zoe (Taissa Farmiga) sits upon a d-piece, and the man of whom it belongs to dies in a gruesome, bloody mess.

The rest of the coven, aside from Fiona and Queenie, is made up of the promiscuous Hollywood starlet Madison, the naive and cowering Cordelia and Nan, who is ostracized repeatedly for being mentally challenged. Madison and Cordelia are complete clichés, and Nan's character is just there to "prove" that these women are too vain to have compassion, because every other witch tells her there's no way she can become the next Supreme.

Beyond who they are, what the women do on the show is even more despicable. The season unfolds around their inability to be loyal, rational or selfless people. Fiona leads the charge, determined to eliminate her successor so that she will remain youthful and powerful (because clearly women will do anything to remain young and beautiful). With tensions running high, all of the women find it impossible to trust anyone. This ultimately leads the girls into a war against one another that results in multiple witches dying.

Coven did offer a couple of proud female moments. Misty Day (Lily Rabe) is a Stevie Nicks-loving, bayou-born flower child with the power of resurrection. She is a woman who keeps her eyes open, speaks her mind and isn't afraid to throw a punch.

And Stevie Nicks is on the show twice. The White Witch appears once to serenade the torn-apart coven with acoustic versions of "Rhiannon" and "Has Anyone Ever Written Anything For You." She pops in again for the finale to twirl through the manor in an awesome 80's movie montage of the girls preparing for their final test. It's almost like an apology for all of the sexism that has come before it.

People watched Coven avidly, because it is a hypnotizing show. But that doesn't mean that she show didn't handle sensitive topics like racism and sexism very poorly among all of its bravado. AHS doesn't have a social responsibility; it's a show that rejoices in pushing us way beyond our comfort levels. But that means that for next season, it would do well though to smarten up its writing, and handle taboos with as much cunning as its villains.