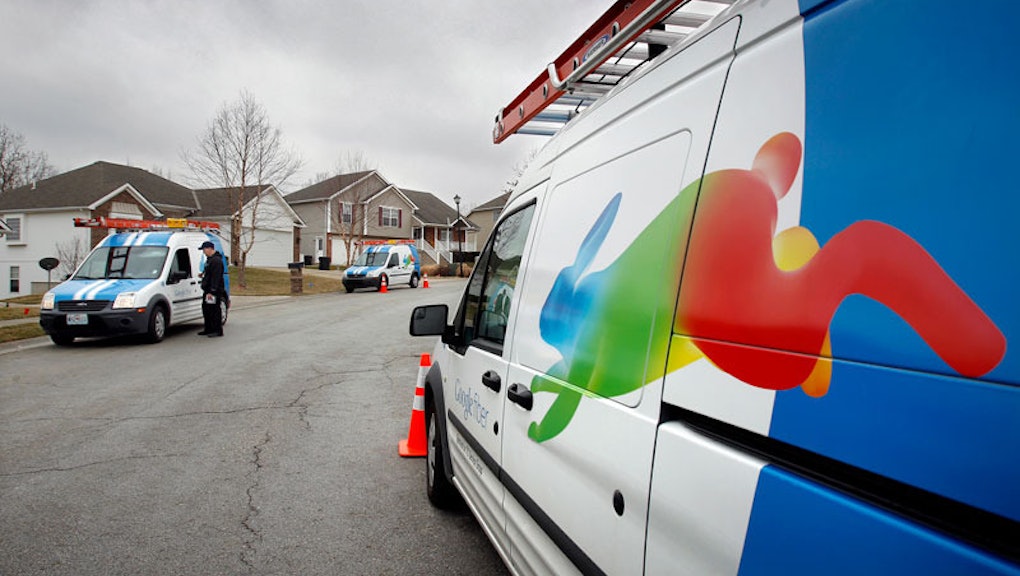 The news: If you live in the U.S., you probably pay a lot for cruddy Internet. Big cable companies like it that way, which might be why legislation like this bill to outlaw municipal Internet has been introduced in Kansas to the outrage of local residents.

Here's the relevant excerpt for what the bill does:

Except with regard to undeserved areas, a municipality may not, directly or indirectly:

A Senate employee told Arstechnica the bill was introduced by John Federico on behalf of the Kansas Cable Telecommunications Association, a telecommunications lobbist group which he serves as president. Basically, it prevents municipalities from offering their own Internet, helping other Internet providers set up shop, or use its powers of eminent domain to enable another company.

It's a direct attack on the ability of municipalities to provide lower-cost, competitive services to their residents, and more specifically designed to prevent the spread of successful alternatives like Google Fiber in Kansas City. Google Fiber is offering residents $70 Gigabit Internet or free Internet for seven years if users pay a $300 installation cost. Google's network is a great example of how public-private partnerships between municipalities and innovative companies can lower costs for consumers and provide better service, even though some experts wonder if it can be scalable across the country.

Instead, the biggest cable companies argue either that you don't need inexpensive, fast Internet (because they offer neither), ignore complaints since there's no competition, or in this case, move to crush innovation.

As South Park put it:

"Perhaps you should switch to another cable company … oh, that's right, we're the only one in town."

Why you should care: Despite being the nation where the Internet was first invented, the United States isn't even close to being the country with the fastest Internet speed. In fact, depending on who you ask, we're no higher than ninth (networking firm Akamai's claims) or maybe even as low as 31st (SpeedTest.net's metric).

And the World Economic Forum has as ranked 35th in broadband bandwidth capacity.

Either way, the U.S. is nowhere close to #1, and we tend to pay significantly more for worse connections. And a significant reason that's the case is because cable companies would rather squeeze as much juice as they can out of existing pipelines than upgrade their service. Why? Because they're basically an oligopoly, with low competition and high fees.

And it's not just Kansas. The cable industry has made similar attempts to prevent threatening progress in other places such as Seattle, where opponent Ed Murray defeated incumbent Mayor Mike McGinn in November. Comcast threw money towards Murray after McGinn announced his support of a public-private partnership to activate hundreds of miles of unused fiber cable sitting below the surface of Seattle for years. One company, Gigabit Squared, was offering 50,000 Seattle residents 100 mbps service for $45/month or Gigabit service for $80/month. Comcast's 105 mbps service cost a staggering $115.

The bottom line: So when a similar bill comes to your state, you'll know why your Internet is still pretty much the same speed in 2020 as it was today, and you're paying the same or more. And if net neutrality goes down, you might see cable companies using that poor service as leverage for you to pay more for premium service that still lags behind the rest of the world.