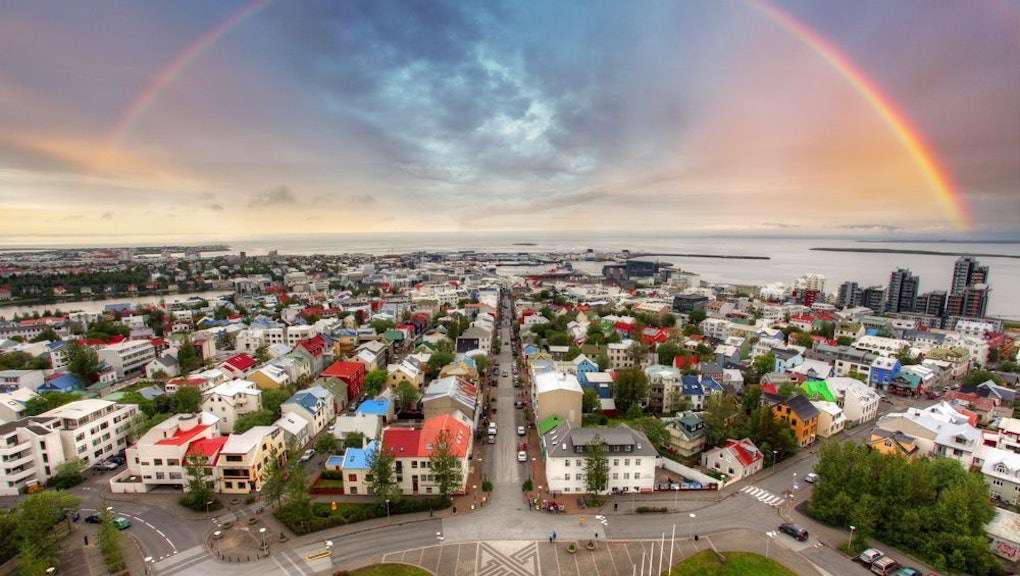 Iceland May Soon See a 2% Unemployment Rate. Here's How They're Doing It.

The news: For a frigid country that’s preoccupied with elves and whose economy relies on the export of fish fillets, frozen fish, fish flours, fish meal, preserved fish and crustaceans, Iceland has done pretty well for itself.

While it was hit hard by both 2008’s global recession and its very own banking crisis, the Nordic state now boasts an unemployment rate that’s under 5% and likely to continue falling. In fact, according to Iceland’s 38-year-old prime minister, Sigmundur Gunnlaugsson, who recently spoke to Bloomberg News, the country's unemployment rate is on track to dip below 2%. Gunnlaugsson acknowledges that the number, “may sound strange to most other Western countries” but explains that, “Icelanders aren’t accustomed to unemployment.”

How did Iceland attain this feat — one that’s been praised by the International Monetary Fund and economist Paul Krugman alike?

By letting its banks fail and prosecuting banking executives who broke the law.

The bubble that burst: The outlook for Iceland hasn't always been so rosy.

In the 1990s, former Icelandic Prime Minister David Oddsson prioritized the liberalization and diversification of Iceland’s fish-focused economy, leading up to the deregulation and privatization of the country’s banks just after the turn of the century. A banking boom ensued from 2002 onward, as Iceland’s institutions began to open themselves to the global market, and issue bonds and offer savings accounts abroad. By 2007, the banks’ assets were valued at almost 750% of the country’s GDP and Icelandic unemployment was, indeed, below 2%.

And then, in fall 2008, the country’s three largest banks — Kaupthing, Glitnir and Landsbanki — went bust. Credit markets dried up as foreign institutions faced their own liquidity crises, and the Icelandic banks proved unable to cover their debts. Given the banks’ astronomical growth, Iceland’s government simply couldn’t afford a bailout — by then, the banks were in hock for about nine times as much as the country’s economy was worth. All three banks went into receivership and were restructured as far smaller, domestic-only outfits.

And then? As outspoken Icelandic President Olafur Ragnar Grimmson famously put it:

In short, in order to get back on its feet, Iceland took IMF loans, but did so without the deep and divisive austerity measures — such as slashing welfare programs and government wages — that were required in countries like Greece. It also banned foreign currency loans, implemented capital controls, and allowed the Krona to lose value.

More importantly, rather than bailing out banks, it reformed and placed restrictions on the banking sector, such as limiting bonuses, and began prosecuting over 100 financial crimes. The CEOs of Glitnir and Kaupthing were convicted of breach of trust and market manipulation, respectively. The former was handed a nine-month sentence, while the latter has just begun his five-and-a-half years in jail.

Can we learn from Iceland’s experience? Yes and no.

Iceland is a small place, and the majority of investment in Iceland’s banks came from outside the country. As a result, its recovery may only translate for states in a similar plight. For instance, when Iceland's banks shut down, the government fulfilled its commitment to insure Icelandic accounts, but was able to turn its back on international customers, causing an international debacle but saving itself billions at a crucial moment.

(Iceland insists it will eventually reimburse the United Kingdom and the Netherlands, which stepped in to help citizens who lost their savings accounts. However, the Nordic country has been taking its sweet time in doing so.)

Further, while Iceland’s recovery has far outpaced those of its peers, it hasn't been wholly without hardship. Employment is up, but credit remains hard to come by, and Icelandic pensions have taken a hit. Worse, the country is struggling to find new ways to diversify its economy; it’s currently promoting tourism and tech startups, but hasn’t exactly found a sector to replace the banks.

Leaving those caveats aside, the island country’s success does show two things. First, that drastic and disruptive conventional austerity measures may not be the best road to financial and social stability. And second, that bankruptcies, market reforms, and prosecutions can go hand in hand with swift economic growth and recovery.

So while other countries may not be able to precisely replicate Iceland’s experience, they can still take a couple notes from it. Even if they don’t have any fish to speak of.