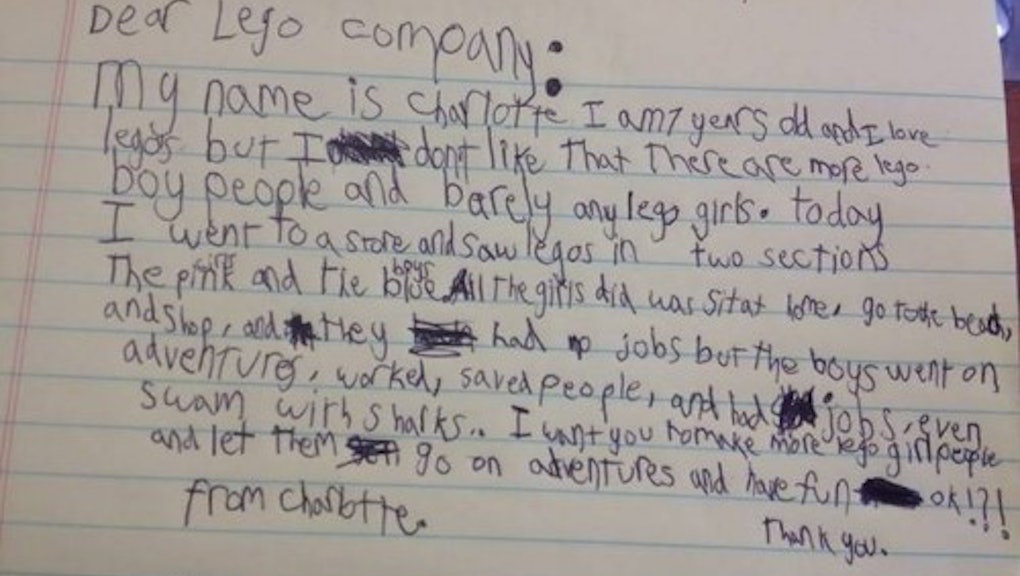 Lego might seem like a simple children's toy company, but a letter from a 7-year-old girl named Charlotte will open your eyes to a glaring problem within the company.

Charlotte's father posted his daughter's letter to Lego on the internet this week, and it's gone totally viral:

The full text of the letter:

My name is Charlotte. I am 7 years old and I love legos but I don’t like that there are more Lego boy people and barely any Lego girls.

Today I went to a store and saw legos in two sections the girls pink and the boys blue. All the girls did was sit at home, go to the beach, and shop, and they had no jobs but the boys went on adventures, worked, saved people, and had jobs, even swam with sharks.

I want you to make more Lego girl people and let them go on adventures and have fun ok!?!

Even though Charlotte loves legos, she knows there's something wrong with the boy/girl ratio of available sets. And she's totally right.

For a company who's message is rooted in the power of a child's imagination, you'd think Lego would be working to allow every single one of their customers to expand their imagination without limits. This 7-year-old has done an amazing job at accurately pointing out a problem within the Lego company. Now let's see how Lego responds.