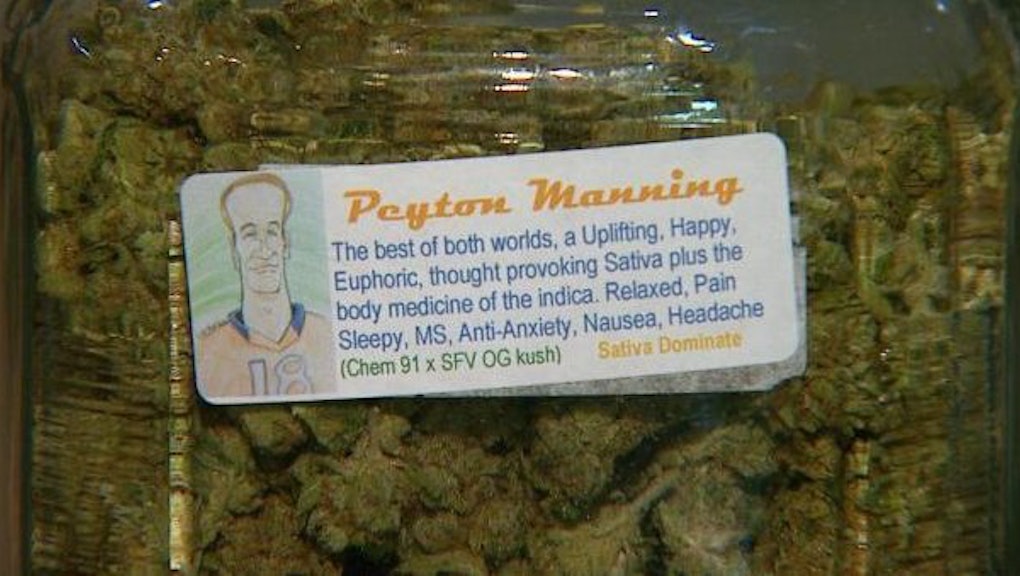 The pro-pot cities of Denver and Seattle coming together for the Super Bowl has dubbed this weekend the “Stoner Bowl” or “Bud Bowl” by pot-smoking fans.

One particular kind of entrepreneur taking advantage of the business opportunities brought by the “Stoner Bowl” are pot growers. With the hopes that fans will blaze before, during and after the big game, pot growers have made things interesting by naming specific strains of marijuana after popular NFL players.

Below are a few players who have received the highest honor. However, we do want to warn those going to the game that marijuana usage is illegal in New Jersey.

Named after Seahawks’ running back Marshawn Lynch, whose nickname is "Beast Mode,” this strain of pot has a tetrahydrocannabinol (THC) content of 17.6%.

The average THC content that exists in Seattle pot vary from 12 to 20%.

“The weed hits you like its namesake,” dispensary owner Nate “Diggity” Johnson told the Seattle Times. “Marshawn has gears when he’s running and [Beast Mode is] kind of like that. It has a little bit of a slow start and then kicks in.” This means after you smoke this pot, you won’t be leaving your seat any time soon. It’s that strong.

Johnson is asking for $13 a gram or $150 for a half ounce of the strong stuff. In Seattle, pot isn’t sold, but donations are collected to handle employees’ salaries and overhead costs.

The “Peyton Manning” strain is priced at $280 for an ounce and is a sativa-dominant hybrid of OG Kush. A representative for Manning threatened legal action a few months back so it’s unsure if this strain of pot is still being sold.

Peyton's brother and NY Giants player Eli Manning also had a strain of pot named after him.

You can apparently smoke "Richard Sherman OG" from Rain City Medical in Seattle, which will also be passing out Seahawks colored weed-infused popcorn that fans can snack on.

If you don't know which Bronco player is your favorite, pot growers have made that decision easier by naming a strain "Orange Crush" to honor the entire team.

Orange Crush is a cannabis strain that creates a cerebral sensation lasting up to two hours and provides a sweet tangy flavor and aroma — perhaps like orange soda.