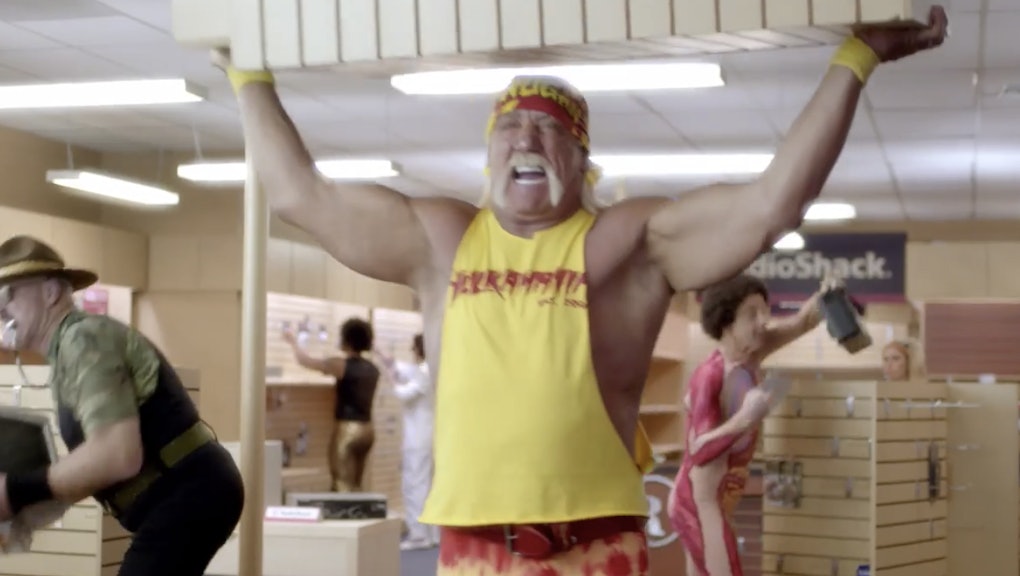 Millennials are suckers for nostalgia, which is why RadioShack's Super Bowl commercial was an advertising masterpiece.

The spot opens with a RadioShack employee completing a phone call and informing his co-worker, "The '80s called. They want their store back."

Cue a string of cameos to make even the most oversaturated nostalgia junkie experience an overdose. While RadioShack apparently lacked psychic mediums to summon the ghost of Ronald Reagan, they included just about everyone else. Among the many celebrities to pile out of that vintage DeLorean:

- WWE (back when it was WWF) wrestler Hulk Hogan

- Bubo, the owl from Clash of the Titans

- Slimer from Ghostbusters (albeit belatedly)

Even as consumers laugh at the punchline, we should doff our hats at the marketing savvy RadioShack has displayed. It's easy enough to dismiss their brand for being out-of-date, and perhaps applaud them for their nationally televised act of self-deprecation, but they used their 30-seconds tonight to do more than simply remind viewers that they existed. In this age of meta-comedy, they brilliantly transformed their seemingly unshakeable irrelevance into an aura of self-aware coolness.

Let's see if this gambit pays off.

Given the "Who's Who of the '80s" quality in this ad, it's almost certain that I missed a few cameos. The first people to spot the figures I missed will win a free time traveling journey back to meet Marty McFly on October 26, 1985!

PolicyMic cannot promise to actually break the laws of space-time for the purposes of this article.