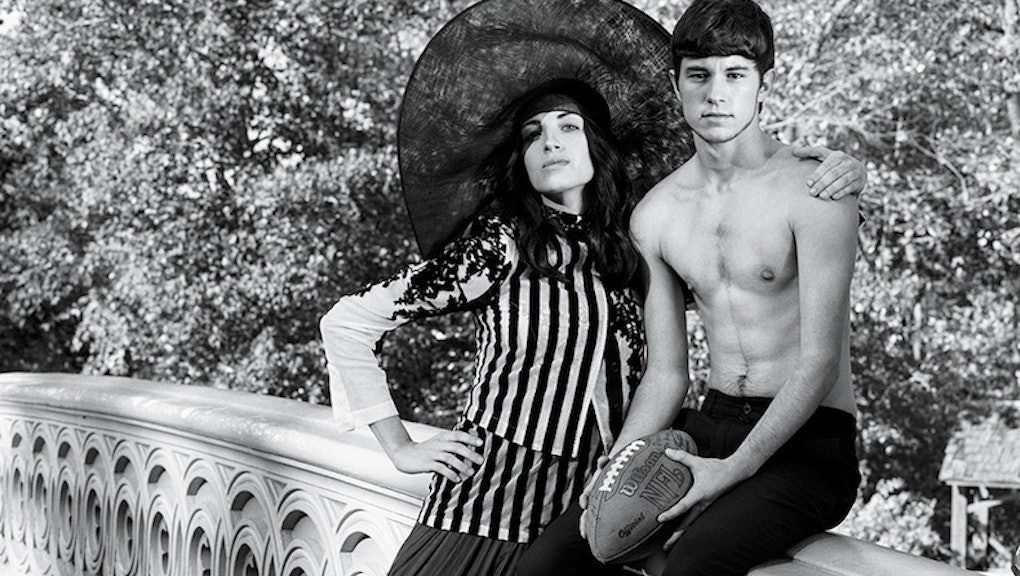 How the Fashion World Is Fighting Against Transphobia

By now you've heard the news that the Barneys New York spring campaign "Brothers, Sisters, Sons & Daughters" will feature 17 transgender models — all of them clad in stunning attire from labels such as Givenchy, Balenciaga and Lanvin.

The solemn yet inviting black-and-white photographs were taken by Bruce Weber — no novice at creating images that contest sexual norms — and are a milestone for a segment of the gender-sexuality spectrum that's long overdue for the kind of exposure and cultural elevation that fashion, perhaps more than any other art form, can confer.

The campaign arrives on the heels of a banner year for transgender people. In 2013, Chelsea Manning came out as transgender, a 16-year-old transgender teen was named homecoming queen of her high school, Jennifer Pritzker became the world's first openly transgender billionaire, tens of thousands signed a petition to make Carmen Carrera the first transgender Victoria's Secret model and Orange is the New Black star Laverne Cox (along with Carrera) shut down Katie Couric's question about her body, a move that won her the Internet equivalent of a standing ovation.

After this slate of advances — and the discussions about gender, identity and transgender rights that it provoked — the Barneys campaign feels like both an epilogue and an introduction; at once a toast to the steps taken in 2013 and a preview of the progress yet to be made.

But the campaign is also an achievement in its own class. It directs our attention back to the hard materials of identity, like bodies, cosmetics and clothes, and invigorates the conversation surrounding the role that fashion plays in the evolution of transgender identity.

The involvement of transgender people in high fashion is a relatively recent phenomenon. The Brazilian model Lea T (above) became known as the "world's first transsexual supermodel" in late 2010 when she became the face of Givenchy. In 2012, America's Next Top Model alumnus Isis King (below) appeared in a campaign for American Apparel.

In the last two years, the number of transgender models has grown significantly, as the scale of the Barneys campaign demonstrates. And many of the models featured in that campaign have, in fact, already established themselves in the haute couture universe: Valentijn de Hingh, for example, has modeled previously for Maison Martin Margiela and Comme des Garçons.

As the presence of transgender people in fashion increases, we can only hope that ignorance and prejudice surrounding gender non-conformity will gave way — not just to tolerance, but to acceptance and affirmation.

Transgender identity — really, any identity — necessarily concerns itself with questions of the body, attire and outward appearance, and a survey of the Transgender Archive reveals the extent to which transgender people throughout history have employed fashion to advance traditional gender nonconformity. Among the books and magazines that transgender rights pioneer Virginia Prince (below) published in her lifetime is the anthology 166 Men in Dresses, a document that links transgender identity to gendered attire. Even as transgender identity has evolved, and important distinctions between transvestism and transsexualism have been solidified, clothing has remained a vital outward signifier of trans identity.

The continued visibility of transgender people through recent campaigns corroborates one of fashion's eternal projects: the dissolution of rigid sexual categories. And in its direct challenge of traditional ideas of gender, the rise of the transgender model seems to be of a piece with another recent trend in fashion: androgyny. Certainly, androgyny has always had a place in fashion and aesthetics, but recently it's begun to drive a whole new sector of fashion merchandise.

Wildfang, a "gender-ambiguous" online clothing store based in Portland, launched (with manifesto) in March 2013; and Veer, an online store "devoted to fashion that's neither male nor female," launched in September. Similarly, as transgender models enter the fray, so too have openly androgynous individuals, such as Australian supermodel Andrej Pejic (pictured below).

It would be a mistake, of course, to conflate transgender people and androgyny. But the collective concern with gender nonconformity is evident in fashion as a driving theme in contemporary style and aesthetics. This is undoubtedly a good thing for the transgender community, as it increases the visibility of transgender persons and forces mainstream culture to recognize them. As the presence of transgender individuals in fashion increases, we can only hope that ignorance and prejudice surrounding gender non-conformity will gave way — not just to tolerance, but to acceptance and affirmation.