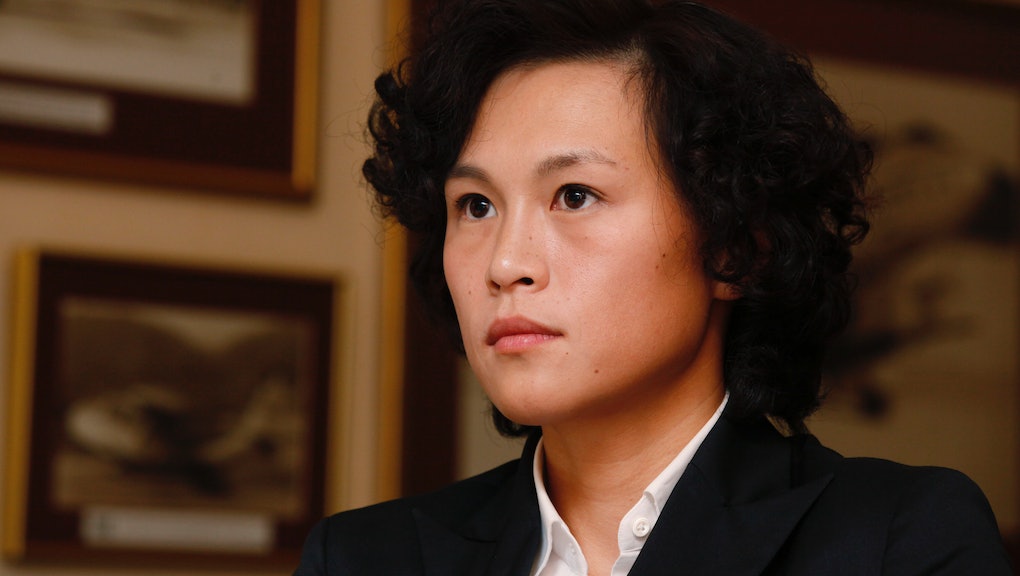 Woman Describes Fight With Father, Who's Offering Men Millions to Turn Her Straight

How much money would it take for you to change your sexual orientation?

For Hong Kong property development executive and philanthropist Gigi Chao, no amount of money would suffice. She is the daughter of the wealthy property tycoon Cecil Chao, who made international headlines in 2012 when he offered 500 million HKD ($65 million) to the man who could successfully woo his lesbian daughter. Over a week ago, Mr. Chao doubled that offer even though his daughter has been married to her partner of nine years, Sean Eav.

It was after learning about his daughter and Ms. Eav's elopement in Paris that Mr. Chao issued the initial marriage bounty, which attracted some 20,000 suitors. When he recently increased the amount to 1 billion HKD ($129 million), men started bombarding the offices of Gigi Chao with phone messages and exclaiming, "I want to be a billionaire!"

Subsequently, Ms. Chao issued an open letter to her father asking him to accept her partner of nine years. She writes, "Now, I'm not asking you to be best friends; however it would mean the world to me if you could just not be so terrified of her, and treat her like a normal, dignified human being." Ms. Chao's letter is sympathetic to her father's conservative beliefs, but it is clear from her public appeal that she hopes to encourage meaningful acceptance for her sexual orientation and the LGBTQ community in Hong Kong.

Although Hong Kong decriminalized homosexuality in 1991, it does not legally recognize same-sex marriage.

Ms. Chao took some time to answer a few questions, offering PolicyMic an update on recent events from her perspective, and elaborating on the work of the BigLove Alliance in Hong Kong. She was joined by Raymond Chan, a member of the Alliance and lawmaker in the Legislative Council of Hong Kong.

PolicyMic (PM): Your open letter has received considerable media attention. How has the public in Hong Kong responded to it?

Gigi Chao (GC): Most of the Hong Kong public has been immensely supportive. Of course, there will always be haters.

PM: How has your family and partner responded to your open letter?

GC: I think it has touched Daddy in some way. He is from an older generation, and therefore rarely expresses his feelings towards things like this. But my sensibility as a woman tells me that he's been touched, and we just have to wait and see.

My partner comes from a large, close-knit family, so they tend to be very private people. She was initially frustrated with the restart of the all the media attention, but has also been touched by the many messages of support from friends and acquaintances.

PM: In an interview with the Independent last year, you said, "Hong Kong is horrible at accepting and welcoming diversity." Has this changed? How is the LGBTQ community affected by these sentiments?

GC: Yes, Hong Kong is still a very conservative place. For all its free media, it is, in many ways, more conservative than mainland China. What we are trying to do with organizations such as BigLove Alliance is to shake the taboo by confronting the issue with courage, with respect, with humor, with the arts — basically in every way possible.

But for many people in the LGBTQ community, it's still very difficult for them to come out freely as they are met with disdain for their threat to traditional family values in a patriarchal society.

PM: Regarding BigLove Alliance's work, what are some of the Alliance's specific campaigns/initiatives that encourage dialogue and understanding about LGBTQ issues? Are there particular approaches that are more useful than others?

GC: The Alliance does a number of things that endeavors to constantly remind the general public of the presence of the LGBTQ community in Hong Kong and the inequality that they face. Photos and details of much of this activity is on our Facebook page and website. I can't say that some are more successful that others because each activity targets different groups and some may be private forums that provide support, for example, for parents of the LGBTQ that feel victimized by their coming out.

PM: Do you think recent media interest in your personal situation has increased community interest in securing legislation that would recognize same-sex marriage in Hong Kong? How would the community work to compel the government to implement changes in current marriage laws?

GC: I think we are years away from legislation that encompasses the word "same-sex marriage." At the moment, our Chief Executive actually goes to great lengths to avoid the mere mentioning of the word, and lawmakers have snubbed even the public enquiry of the possibility of passing an anti-discriminatory equal opportunities law. That's right. They are embarrassed to even talk about the fact that they are discriminating.

PM: Have there been lawmakers in the past that expressed support for the LGBTQ community? How does the BigLove Alliance approach lawmakers given these political and cultural dynamics?

GC: In terms of political campaigning, it's an ongoing battle between the small minority that support gay rights, the largely unsure moderate middle who are embarrassed to bring it up, and the fundamentalist religious groups who are adamantly opposed and continue to use scare tactics to maintain the "seen not heard" attitude.

For example, there are still rampant examples of gay teachers being sacked, young LGBTQ being bullied at school that could lead to suicide, LGBTQ turned away from church, and the majority of LGBTQ terrified to come out, especially in the workplace, just to name a few issues. The BigLove Alliance works to provide a voice for them and serve as a source of support.

Given the current political climate of Hong Kong, it would be a big challenge for people to get the law to recognize and protect any type of minority.

Raymond Chan: There indeed are lawmakers supporting our cause, and they can be found across the political spectrum. It would be erroneous to assume that the pro-establishment, pro-Beijing ones are socially and culturally conservative, and the pro-democracy camp are progressive on LGBTQ issues. On the one hand, it is heartening to see strong supporters from the New People Part, whose partnership in the governing coalition is highlighted with Regina Ip's background. I hope Ip could persuade the pro-government camp to promote and become more sensitive to LGBTQ equality. Ip's position shows that LGBTQ issues are not incompatible with a politically conservative agenda, contrary to what the pro-vested interest Liberal Party has led the public to believe. On the other hand, [the] Democratic Party's Wong Sing-chi, James To, and other members ran the gamut of being totally hostile to having deep reservations toward our agenda. History could serve as a guide for the future. The anti-discrimination legislation was tabled in the Legislative Council of Hong Kong twice between the return to Chinese rule in 1997, and was defeated twice as it was only a few votes short of passage. On one occasion, the failure to pass could be blamed on the Association for Democracy and People's Livelihood, chaired by Frederick Fung, of the grassroots pro-democracy camp, refusal to vote in favor of the bill.

The BigLove Alliance has faith in the power of reason and persuasion to garner allies on both sides of the aisle. We believe LGBTQ equality is a human right and should transcend mere politics.

In a separate interview with the South China Morning Post, Ms. Chao further explains her experience about her coming out, her family's reactions and long-term aspirations for Hong Kong and its LGBTQ community.