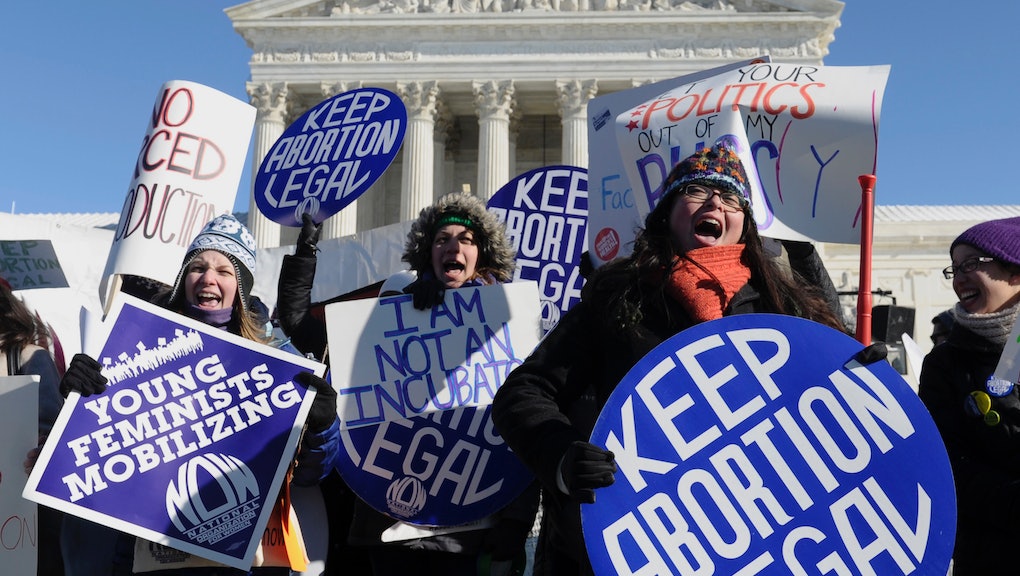 The Real Reason Abortion Rates Are At An All-Time Low

According to a study by the Guttmacher Institute, a pro-choice think-tank, released on Monday, abortion rates are at an all-time low since Roe v. Wade legalized abortion in 1973. Since 2011, the latest year for which figures were available, there were fewer than 17 abortions for every 1,000 women — down 17% percent since 2008.

Now before pro-lifers claim victory — that the recent upsurge in anti-abortion legislation, from requiring an ultrasound and increased inspection before obtaining the procedure to limiting abortion post 20 weeks — is the reason for the drop, the figures were recorded in 2011 before the majority of these draconian laws were enacted.

One important factor contributing to the decline in the abortion rate, the authors suggested, were increased access to and efficacy of contraception, including the IUD which lasts for years and does not require taking a pill or using a condom (though it should be noted that it prevents pregnancy, not STDs). This is not surprising: a 2012 study showed that access to free birth control greatly decreased the likelihood of abortion. As William Saletan wrote for Slate:

What happens when you provide condoms and contraceptive services? Women who don’t want to get pregnant don’t get pregnant. Which means fewer women are in the market for abortions. The abortion business dries up … [T]he pattern becomes even clearer. The Lancet article reports: ‘We found that the proportion of women living under liberal abortion laws is inversely associated with the abortion rate in the subregions of the world. Other studies have found that abortion incidence is inversely associated with the level of contraceptive use, especially where fertility rates are holding steady, and there is a positive correlation between unmet need for contraception and abortion levels.

Sex education may also be an element in curbing abortion rates. In California, the teen birth rate dropped nearly 60% as a result of expanded sex education programs. And a 2014 study showed that MTV show 16 and Pregnant, crazily enough, led to a 5.7% reduction in teen births in the 18 months since its premiere.

Another poignant reason for the abortion rate’s decline is the economy because people tend to use birth control more stringently during difficult financial times. "They stick to straight and narrow ... and they are more careful about birth control," said Elizabeth Ananat, a Duke University assistant professor of public policy and economics who has researched abortions.

Still conservative columnists attack the logic of the inverse relationship between conservative anti-choice and anti-contraception laws and abortion rates while right-wing politicians continue tirelessly to chip away at Roe and Planned Parenthood.

Someone needs to give them a reality check: pro-life — less abortion — means less restrictive laws and more widespread access to contraception.