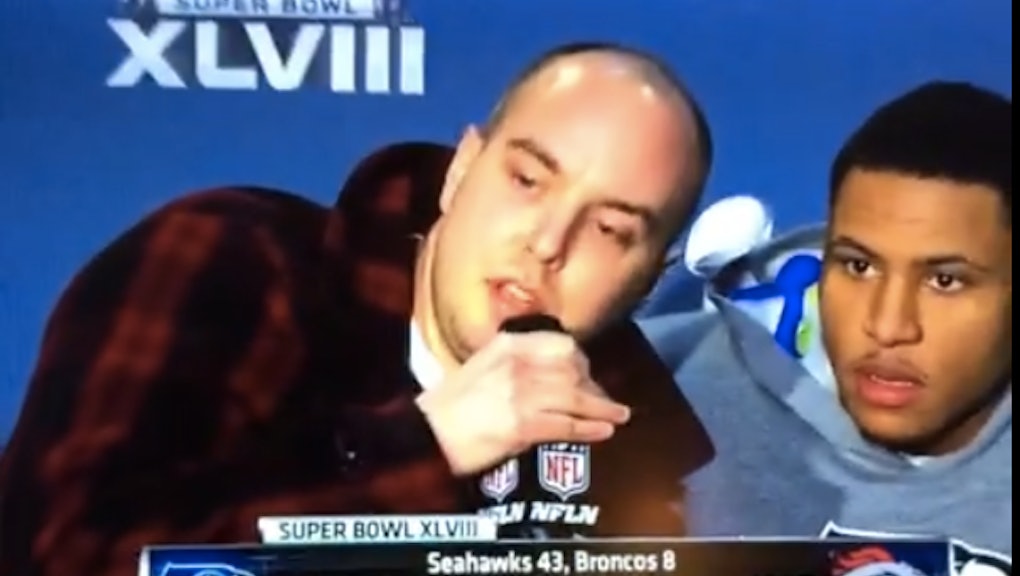 How Did This Guy Get Past Super Bowl Security? Here's the Stunning Story

The news: The most bizarre moment of Super Bowl XLVIII happened after it was over.

During Super Bowl MVP Malcolm Smith's postgame conference, a random 9/11 truther grabbed the mic and did, well, what 9/11 truthers do best: confuse the living heck out of people.

"Investigate 9/11. 9/11 was perpetrated by people within our own government!" the guy yells, before being pulled away by staffers. Smith looks pretty confused by the whole thing but manages to resume the conference after saying "Alright. Is everybody alright?"

The man, 30-year-old independent journalist Matthew Mills from Brooklyn, was arrested for criminal trespassing following the intrusion. Mills' one-man infiltration of the Super Bowl proved that the biggest security breach of the night wasn't just the Broncos' defense.

How he did it: Mills knew he had to tell the world the truth about 9/11. He also knew that he had to do this during a press event at the Super Bowl, for some inscrutable reason that makes perfect sense to him.

So Mills saw an employee bus at Secaucus Junction and hopped aboard. Then when he got to the event, he used an old festival pass that looked similar to official staff ones to avoid attention. Super Bowl security was terrifyingly easily fooled by Mills.

"I just said I was running late for work and I had to get in there. It was that simple," he said, passing through multiple security teams.

"I didn't think that I'd get that far. I just kept getting closer and closer. Once I got past the final gate and into the stadium, I was dumbfounded."

"I just saw my opportunity to get my word out there and I took it." And the rest is Super Bowl history.

Why you should care: The Super Bowl is supposed to be one of the safest, most secure events in the entire country. But apparently a dude from Brooklyn with an old press pass can just waltz up to the podium to say whatever he wants before security has time to react. It's pretty easy to imagine how this could have ended a lot worse for Smith and the press than being subjected to 6 seconds of conspiracy theories.