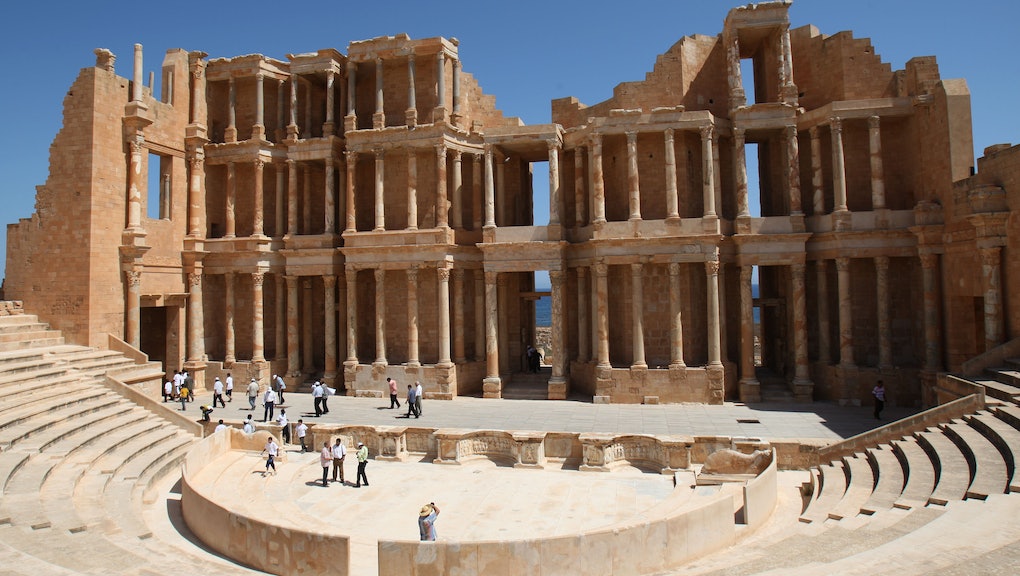 14 Reasons to Visit This Country, Even Though the State Department Doesn't Want You To

Beautiful beaches? Check. Interesting cultural and historical sites? Check. Astonishing natural landscape? Check. All these ingredients for an amazing vacation can be found in a place you might least expect: Libya.

While the country's politics usually dominates headlines rather than its beaches, it's worth learning more about the country's beauty, people and history.

The U.S. Department of State currently has a travel advisory for Libya, warning against any travel to areas outside of Tripoli, Libya's capital. Many places in Libya are highly unsafe now, especially those areas outside of the control of the central government and plagued by the activities of warring militias. So it might not be time to pack your bags yet.

However, Libya's government is working hard to improve security conditions and bolster its tourism industry. Foreign Policy recently featured a blog post about why Libya is a great place to visit: "When most Libyans look around, they still see, in essence, the same old country they've always loved, and they can't help imagining what a success the place would be if they could just open it up to the outside world: Unspoiled Mediterranean beaches with year-round sun. An astonishing range of Roman ruins and other ancient sites. The romance of the Sahara's great sand ocean. And all of it just a short ferry ride away from the European Union."

Here are 14 beautiful things to see in Libya:

Cyrene, Libya is home to the archaeological ruins of the ancient Greek city Cyrene, which is one of five UNESCO World Heritage Sites in Libyathe country. Cyrene was built by the Greeks in the 4th century B.C., and later became part of the Roman Empire. The temple of Zeus, pictured above, is just one of many amazing sights at the Cyrene complex.

Leptis Magna, also a UNESCO World Heritage Site, was one of the most beautiful cities in the Roman Empire. It is now a top tourist attraction because of its extraordinary architecture and historic interest.

Villa Silene is a Byzantine estate located near the Leptis Magna site. The ancient home has beautiful mosaic floors, lovely gardens and overlooks the Mediterranean. A trip to Leptis Magna and the villa would make for a great day trip.

Sabratha is an ancient city that was originally built by the Phoenicians and later became part of the Roman Empire. The ancient history preserved at the ruins, as well as its beautiful Mediterranean location, make it a top attraction in Libya.

Libya's capital city is not only one of the safer places to visit, but also one of the most beautiful. A visit to Tripoli is well worth it for the Turkish and Italian architecture, the Red Castle, ornate mosques and churches, the “Old City," great dining options, and the gorgeous coastal view.

It's also beautiful at night:

The Arch of Marcus Aurelius is located in Tripoli's Old City. The monument was built when the area was part of the Roman city Oea, and reflects the Roman influence that pervades the country. Tripoli is full of architecture that reflects the different cultures that are part of Libya's history — Phoenician, Greek, Roman, Turkish and Italian.

The Grji Mosque, also located in Tripoli's Old City, was built in the 19th century when Libya was part of the Ottoman Empire. The mosque features some of the city's finest examples of Islamic art.

In addition to the beauty of the building itself, the Red Castle is Libya's national museum. Stop by and familiarize yourself with Libyan history before you begin the exploring all that Tripoli has to offer.

Tripoli's medina, or "Old City", is one of the top tourist attractions of the city because of its famous fish market, historical appeal, thriving nightlife and beautiful European architecture.

Much of Libya is made up of the Sahara Desert. Tour companies can take you on an excursion into the Sahara, where you can see the remarkable landscape and visit desert oases.

The Old Town of Ghadamès, Libya, is often called the "pearl of the desert," is an oasis town in the middle of the Libyan Desert.

Northern Libya, including Tripoli, borders the Mediterranean Sea, which makes for some absolutely gorgeous beaches and coastlines that are must-sees for any traveller to Libya.

What could be more perfect than vacationing at a beach on the Mediterranean? Farwa has some of Libya's most beautiful and tourist-friendly beaches.

Despite the security concerns, there are many places in Libya that would make for a great vacation destination. Be smart about your travels, and you could still have the adventure of a lifetime in one of the most beautiful and historically rich countries in the world.