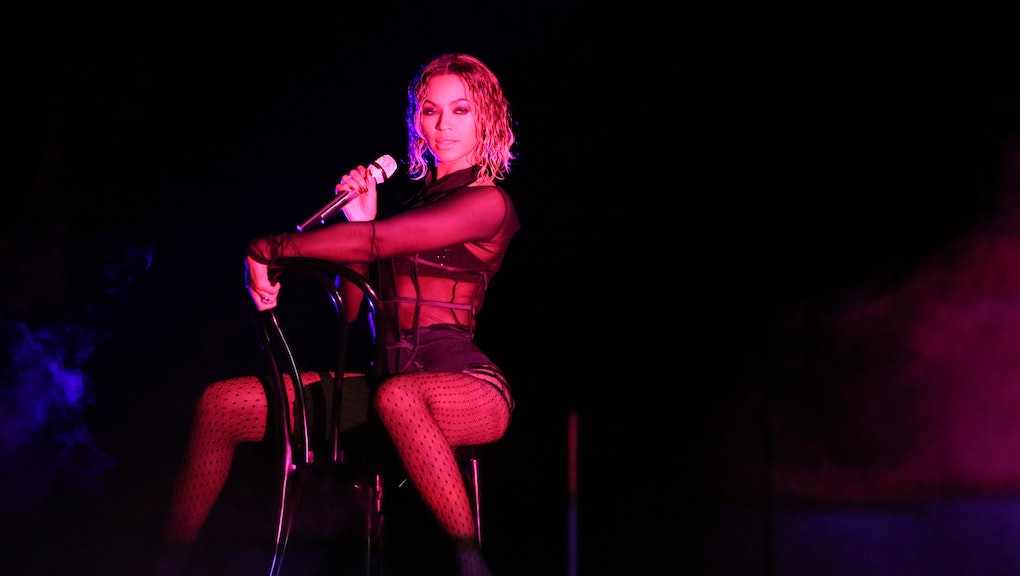 In the wake of Beyoncé's self-titled fifth album sneaking out in December, the Internet has been scratching its head trying to figure out where Bey sits on a feminist scale ranging from Playboy to de Beauvoir.

After years of shying from the term (as she once told British Vogue, "that word can be very extreme"), Beyoncé not only decided to own it on "Flawless," but also to define it using language from Chimamanda Ngozi Adichie's TED talk:

The discussion of Bey's feminist credentials has often focused on how her album fits into current discourses on race and feminism, or it analyzed the imagery included on the visual album. Both are certainly valid approaches, yet little has been said about the actual numbers behind an album deemed a "feminist manifesto."

This is troubling, because out of the 45 artists listed in the liner notes to Beyoncé's feminist opus (which includes writers, producers and directors), only six are women.

If the biggest pop star in the world announces that she believes feminism to be about equality, but then fails to use her platform to promote more women's work, it is valid to question her intentions?

This number does not count her daughter Blue Ivy, who briefly speaks on "Blue," but does include songwriter Kelly Sheehan, who only appears on the album because the video for "Grown Woman" is a bonus goodie. Beyond that, there are only five women, including Bey, working behind the scenes. Not one of the co-writers or co-producers in the core songs of the album's exploration of sexual agency — the triptych of "Blow," "Partition" and "Rocket" — are women (although most of the horn-section of "Blow" is female).

Although there are other female team members listed in the credits section of Beyoncé's website, including eight musicians and two engineers, they are still heavily outweighed by the swaths of men. This is a surprising move for the pop star, who very deliberately chose the all-female backing band the Sugar Mamas for her Super Bowl halftime show last year and for her Mrs. Carter tour. But it seems she chose one group for the public stage and another for the studio.

Does this matter? Should we still celebrate the fact that Beyoncé has attempted to combine R&B with more overt feminist overtones? Maybe, but maybe not. With an album that broke download records without any marketing hype, and if she announces that she believes feminism to be about equality, but then fails to use her platform to level the playing field by promoting more women's work, it is valid to question her intentions?

If Beyoncé wants to define feminism in part through equality in the economic sphere, then it is problematic that her album features such a small percentage of female contributors.

Of course, this might be because the music industry at large simply does not support enough women to allow their equal representation in the first place. Perhaps Beyoncé lacks this sort of control in the choice of production staff. Then again, this is a woman who recently published a short essay entitled "Gender Equality Is a Myth," only to stage shows featuring all-female bands and backing dancers while a heavily-male staff pulled the strings behind-the-scenes. There is no doubt that Beyoncé is a strong female figure and a true businesswoman, but she still is not using her power to address many of the issues that continue to hold women back in the industry in a serious way.

The teams on a variety of recent albums from other female singers aren't very different. According to AllMusic, on Laura Mvula's 2013 success Sing to the Moon, 15 out of 54 staff members were women, amounting to about 28% of those involved. The team on Janelle Monae's Electric Lady, which was lauded for containing strong feminist anthems, boasted 11 women, including major musical collaborators Erykah Badu, Esperanza Spalding and Solange Knowles. Incidentally, the only featured artists on Beyoncé are men.

Approximately 10 of the 73 staff members on Katy Perry's Prism were female, compared to five out of 13 on Miley Cyrus' Bangerz. And Beyoncé's sister is the only woman listed in the credits for her 2012 album True. Across the board, it seems there are not as many women as men being hired as creative team members.

One could argue, as does blogger Christine Osazuwa, that this places too much responsibility on the individual artist. Osazuwa wrote that the public move to hire the all-female Sugar Mamas for the Super Bowl, for example, was an important statement, and that Beyoncé alone does not hold the responsibility of hiring women just for the sake of hiring women. "It's impractical to wait for some beacon of hope to revitalize the music industry for women," she wrote. "The best thing a woman can do is do her job well, consistently and fight just as hard as the men." Osazuwa has said, however, that in an industry where the "best of the best" are often men, it is hard for women to get the premium gigs necessary to prove themselves as equals.

Let me be clear: Beyoncé is not to blame for the issues women continue face in the music industry of which she is a part. But if Beyoncé wants to define feminism in part through equality in the economic sphere, then it is problematic that her album features such a small percentage of female contributors.

Should she positively discriminate for the sake of her point? That's another story entirely. But having women predominantly on stage and almost none in the recording studio is worth questioning. After all, as the Harvard Lampoon's first black female editor recently told New York Magazine, "Performers are easy. You can see them, you can count them. Here are the brown ones, here are the non-brown ones. But even if I had a cast full of brown people, if there are only white people or only men in the writers' room, what kind of show are we going to have?"

And if this was what Beyoncé came up with surrounded by a team of mostly men, just imagine what she could do with more women in the studio.