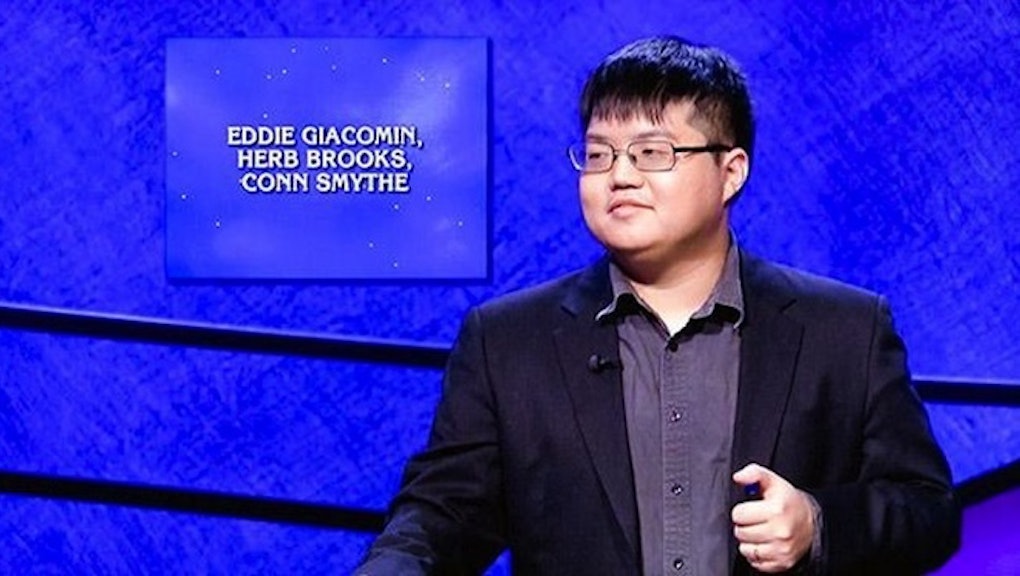 One Wednesday, Jeopardy! ended in a very rare tie.

What made it especially notable was the way it happened.

Rampaging winner Arthur Chu first appeared on Tuesday and won three times in a row. On Wednesday's game, Chu took the rare step of neglecting to add $1 to his Final Jeopardy! bet, allowing his opponent to go home with a generous $26,800 tie.

Why bet to tie? Game theory. If Chu was wrong, he could lose big time and walk away from Jeopardy! for the last time.

Here's an interesting breakdown of his tying game by Keith Williams, whose vlog The Final Wager analyzes Jeopardy! bets.

It's not just game theory. One other tactic Chu uses is enthusiastically searching for the Daily Double, which Business Insider calls a "grating experience" for the viewer. It screws up the rhythm of the game by preventing the viewer from getting the hang of categories and leads to boards that look like this one:

As seen above, Chu pursues the Daily Double even when he knows nothing about the subject, including sports. That's to deny his opponents a chance at one-upping him.

Chu's other tactics including buzzer rushing, which has not won over some fans. At times, it almost seems like he's cutting Trebek off. But it's hard to fault the guy for knowing every answer. He's rushed to answer after other players screw up, such as when he hastily rung in to correct competitor Cesar Perez-Gonzalez's incorrect identification of an antelope as a "prog-horn" with the correct answer, "prong-horn."

These tactics have won him both praise and condemnation.

And his Jeopardy! strategies have provoked in-depth analyses, definitely marking him as the show's biggest flashpoint in recent memory.

But it's been just three games. He has a long way to go before even coming close to challenging a record like Ken Jenning's, who won 74 consecutive games in 2004.