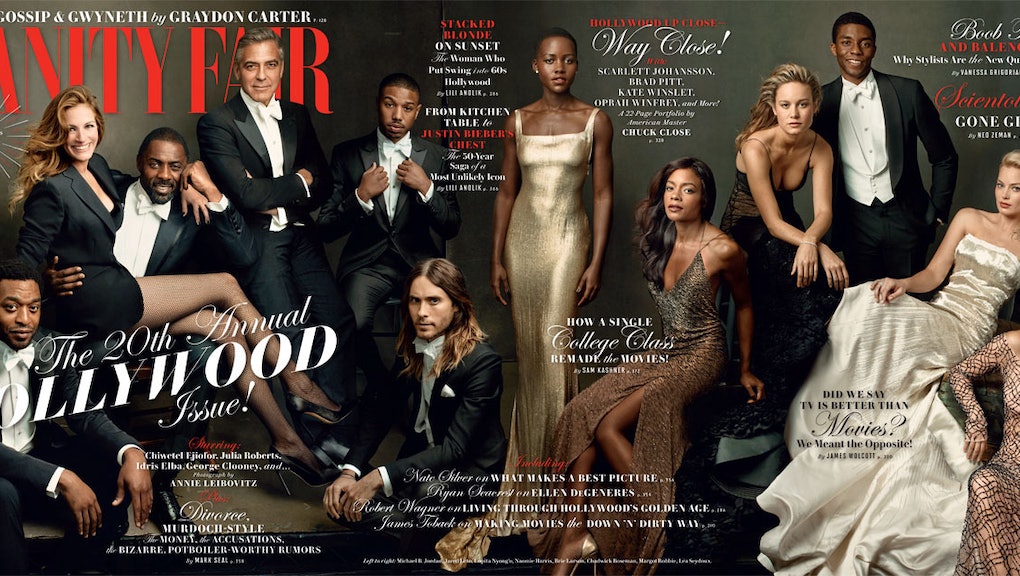 Everyone is freaking out because Vanity Fair finally put some black actors on the cover of its Hollywood issue. Think about that for a second. It's 2014, and people are celebrating that people of color appear on the cover of a magazine. This is something to be expected in this supposedly progressive day and age — not praised.

In all, six of the 12 actors featured on this year's three-part, fold-out cover are people of color. The section of the magazine visible on newsstands features Chiwetel Ejiofor of 12 Years a Slave alongside Idris Elba of Mandela: Long Walk to Freedom. They're joined by Hollywood stalwarts George Clooney and Julia Roberts.

Isn't it about time we stopped treating the presence of black faces on magazine covers as victories, and instead recognize them as long-overdue progress in the greater fight for equality?

You'd have to go all the way back to 2007, when Chris Rock graced the cover, to find even one person of color leading the Hollywood issue. In fact, Vanity Fair has been widely criticized for pushing non-white actors off its main cover, which is exactly why people are so excited about this year's installment.

Everyone from BET to Buzzfeed is heaping praise on Condé Nast's high-culture publication, lauding the addition of diverse faces as — among other things — "refreshingly different."

Yes, it's Black History Month. And yes, we should recognize every single victory that closes the vast gap of inequality that continues to divide America, even in 2014. But there's a difference between recognition and celebration.

The Civil Rights Act ended segregation 60 years ago. Isn't it about time we stopped treating the presence of black faces on magazine covers as victories, and instead recognize them as long-overdue progress in the greater fight for equality?

It would be "refreshingly different" to see the media greet these moments with muted response rather than reverence. Something like, "It's about time" or, "makes sense."

If we're celebrating that black people are on the cover of a magazine in 2014, then there isn't anything worth actually celebrating, at least as far as racial equality is concerned.