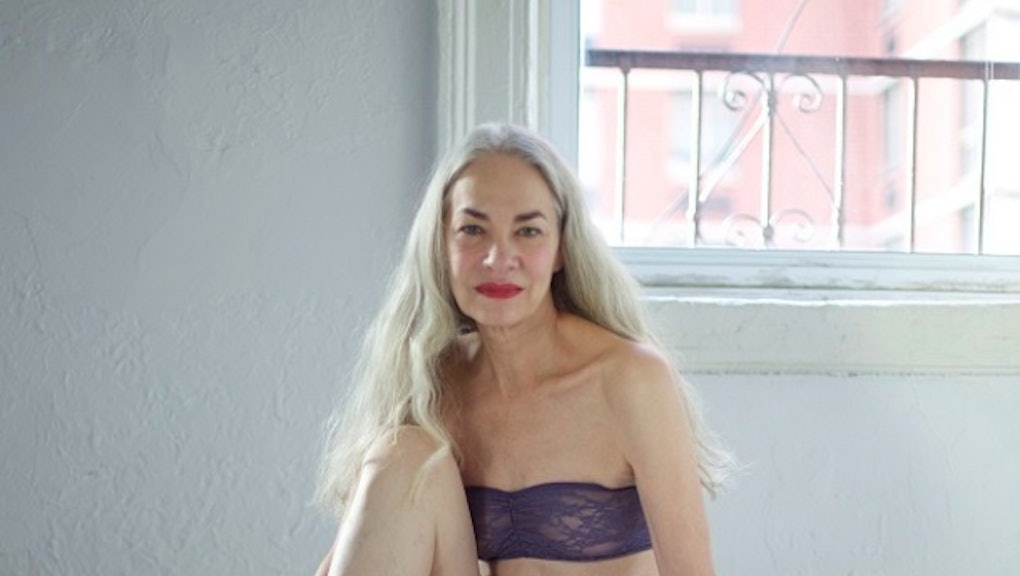 This American Apparel Photo Went Viral. Here's What Happened Next.

On Thursday, American Apparel, a clothing company that typically advertises its products using images of young women, uploaded a photo to its Instagram and Facebook accounts.

In the image, Jacky O’Shaughnessy, a 62-year-old model, is pictured sitting on the floor of an empty apartment, wearing only lacy high-waisted underwear, a bandeau bra, and a full face of makeup. The bra and underwear are purple and magenta, respectively. The apartment is white.

Since then, approximately 2,500 Facebook users and 18,000 Instagram users have used their accounts to like the photo. Some cited the picture as a vital change of pace. Others described it as a marketing stunt. Still others expressed revulsion, and asked for a return to the norm.

Some people clicked on and shared those articles. They scrutinized the photo, and previous pictures of O’Shaughnessy, in order to see if they approved of them, and of American Apparel as a brand and a concept. These individuals likely did so while checking their social media accounts, possibly while taking a break from the workday, or from attending to other, more pressing matters.

For many of these people, looking at the photo of O’Shaughnessy, reading articles about it, and forming an opinion was a satisfying, endorphin-triggering experience. Expressing that opinion served to highlight their allegiances. It gave them a way to assert their self-images and to engage with like-minded individuals.

Over the next five days, people around the world voluntarily disseminated the photo, exponentially increasing the number of impressions the advertisement received. Back in a boardroom, American Apparel sat back and congratulated itself on its marketing feat. Or it would have sat back, if it could have. It cannot. While it may have a controversial CEO and project a carefully curated brand image, American Apparel is not a person. It is a clothing company. It cannot use a chair.

Next week, another clothing company will release a controversial ad that attempts to make a particular statement. (Even now, the advertisement is ready to run. The photo shoot has long since been broken down, the copy deliberated by a Madison Avenue agency. The company waits, as do we.) Perhaps, instead of posting its work to Instagram, this company’s marketing team will send the photo out via a trendier but untested channel, like Snapchat. Or maybe they will go a more conventional route, and propagate their photo via a flurry of press release emails.

Either way, blogs and news agencies will spend days scrutinizing and discussing the new advertisement, and comment threads will vacillate between congratulation and outrage.

And then, the week after that, we will do it all again.