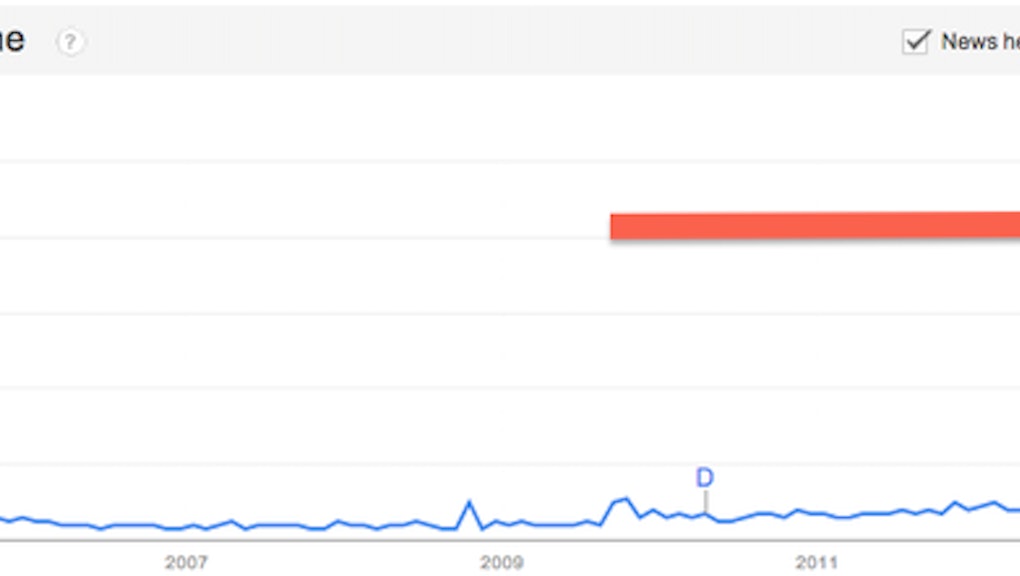 'The Wolf of Wall Street' Made America Hungry for Quaaludes (Again)

The news: What is a "Quaalude?" That's what people all over the Internet were asking in record numbers at the end of 2013:

As the above chart indicates, interest in the term was almost nonexistent throughout the previous decade. Then there's a sudden and dramatic shift.

The background: If you were into "expanding your consciousness" in the 1970s, odds are you popped the occasional 'lude.

According to PBS' Frontline, methaqualone, the key chemical in Quaaludes, was first developed in India as an anti-malarial during the 1950s, and American doctors began prescribing it as a non-addictive alternative to barbiturates in the mid-60s. Folks quickly realized that "'luding out," or combining prescription Quaaludes with alcohol, produced a pretty awesome "sleepy high." By the 1970s, recreational use was in full swing.

But this decade-long party wasn't all fun and games. Quaalude overuse was linked to buzzkill side effects like "respiratory arrest, delirium, kidney or liver damage, coma, and death."

In 1984, Congress successfully enacted legislation banning production of the drug, effectively eliminating it from the U.S. market. This explains the "delayed reaction" scene in Wolf of Wall Street, which is set in the mid-1990s: because Quaaludes had been out of production for over a decade, the old batch obtained by Jonah Hill's character takes a while to kick in.

Quaaludes also share interesting links with methamphetamine, since both contain prescription drugs as core elements and feature prominently in recent pop culture (Breaking Bad, anyone?). In fact, the DEA was confident that meth could be eliminated using the Quaalude approach — restricting sales of its key ingredients. Basically, they thought blocking pseudoephedrine purchases would make meth too sophisticated for normal folks to manufacture. We know how well that worked out.

The takeaway: It's always interesting to witness how pop culture impacts broader cultural interests. But for curious viewers, it's nearly impossible to actually try Quaaludes nowadays without figuring out how to make them yourself. To those willing to try, good luck — if Internet trends are any indication, you have curious customers waiting for you.