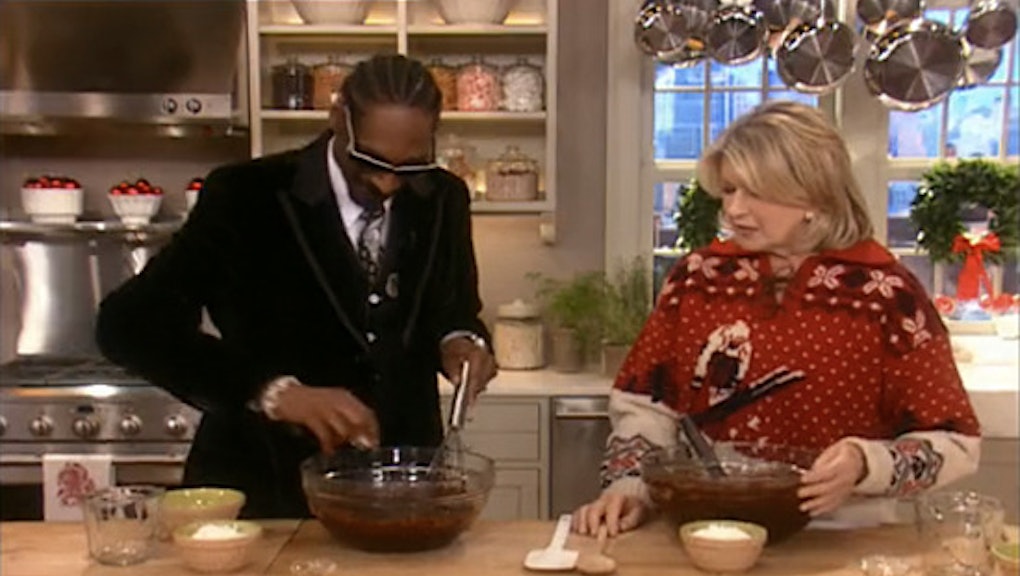 The news: If America loves anything, it's thoughtful and intelligent conversations about race.

Add Snoop Dogg and Instagram to the mix, and you have a recipe for success:

This two-year-old meme re-emerged yesterday when the 42-year-old rapper posted it to his Instagram account. It shows him whipping up (special?) brownies with Martha Stewart, the business magnate and TV personality whose passion for home décor and baking inexplicably fuels a multimillion-dollar media empire. The caption reads: "Be mindful about stereotypes. Only one of them is a convicted felon."

What's the big deal? And why is no one protecting that sweet little lady from that lanky cornrowed goon?

Calm down, you racist: The joke is that Stewart is a convicted felon. In 2004, a New York City jury found her guilty on four counts of "obstructing justice and lying to investigators" in relation to a "well-timed stock trade." M. Diddy served less than five months in the Federal Prison Camp at Alderson, W. Va., which looks nicer than your college dorm:

Her bittersweet departure was followed by two years of supervised release, during which she was permitted to continue her normal business operations largely unhindered. Just like how whenever child molesters are released, they're sent to work at elementary schools.

Snoop's meme is meant to provoke thought about the weight we place on appearances. He correctly presumes that most people would look at this pair and pick him, a black man, as the ex-con over Stewart, a white woman, any day. According to him, the joke is on you for unfairly stereotyping.

Oh, the irony: But Snoop was convicted of "felony drug possession and possession for sale" in 1990, according to the Los Angeles Times. So while this meme has noble intentions, and potentially raises broader questions about racial profiling, black male incarceration rates, and even white-collar crime, using him as an example of misplaced assumptions isn't the knockout punch this argument needs. Perhaps examining the NYPD's notorious stop-and-frisk policies would get the job done better. Meanwhile, let's hope these jailbirds enjoyed their brownies.