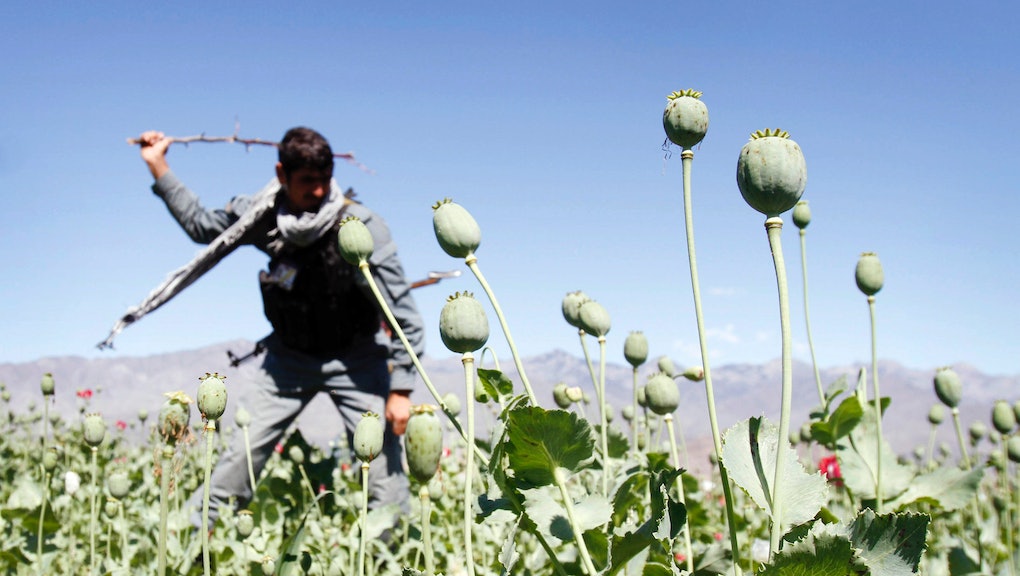 3 Charts Reveal Everything You Need to Know About Heroin Production

The recent tragic deaths of actors Philip Seymour Hoffman and Cory Monteith have brought heroin back into the spotlight.

There are a few reasons the drug is re-emerging at a level we haven't seen since the 1970s. Crackdowns on Oxycontin and prescription drug abuse are considered major factors contributing to the increase in heroin demand. And increased production is making heroin, a processed version of opium (which is derived from the poppy plant), easier to obtain and less costly than it has been in years.

Perhaps more than anything else, the rising trend is a sign of America's continuing failures in Afghanistan — which produces 90% of the world's opium.

According to John F. Sopko, the U.S. special inspector general for Afghanistan reconstruction, the U.S. has made a "mammoth investment" to stop the opium and heroin trade. On Jan. 15, Sopko said in a testimony before the Senate Caucus on International Narcotics Control that the U.S. has spent $10 billion since 2002 to combat Afghan poppy production, and to induce farmers to plant alternative crops.

But Sopko was also quick to point out that American efforts to quell poppy production in Afghanistan have been a massive failure. In fact, opium remains Afghanistan's biggest cash crop, and poppy-derived products brought $3 billion to Afghanistan in 2013 — constituting 15% of its GDP.

And despite American boots on the ground, "More land in Afghanistan is under poppy cultivation today than it was when the United States overthrew the Taliban in 2002," he said. "The land area planted in opium poppies has nearly tripled from the 74,000 hectares reported in 2002," Sopko said in his statement.

The report also included this chart, which shows the increase in amount of land used in opium cultivation:

And the farmers are seeing increasing returns for their work. "[T]he export value of opium and its derivatives, such as heroin and morphine, increased by more than 30% to almost $3 billion in 2013," Sopko added.

So what exactly is contributing to this disturbing increase in Afghan opium production? For one, the Taliban actually did a good job of suppressing the drug trade. After the U.S. invaded, the Taliban's absence left a giant power vacuum, allowing narcotics organizations to take over. In fact, Sopko said that opium production remains strongest in areas "where insurgents and criminal networks are strongest."

Secondly, Afghanistan's struggling economy has left its farmers with little recourse. Over 75% of the people live in rural areas, and the poppy plant is by far the most successful crop. The U.S.'s failure in revitalizing the Afghan economy has forced farmers to take part in the drug trade because they have few other options to make money.

Lastly, and perhaps most troublingly, the U.S. effort in Afghanistan to stop Afghan opium production has been ineffectual and nontransparent. Perhaps Sopko's statement of frustration speaks best for itself:

"Nonetheless, on my last trip to Afghanistan no one at the Embassy could convincingly explain to me how the U.S. government counternarcotics efforts are making a meaningful impact on the narcotics trade or how they will have a significant impact after the 2014 transition. ... In addition, I was astonished to find that the counternarcotics effort does not seem to be a top priority during this critical transition period and beyond."

So after over a decade in Afghanistan, the U.S.'s weak efforts have merely contributed to the rise in Afghanistan's poppy production, and in result, the growing power of the opium and heroin trade around the world. When the Taliban does a better job of policing narcotics than the U.S. government, you know you are failing miserably.