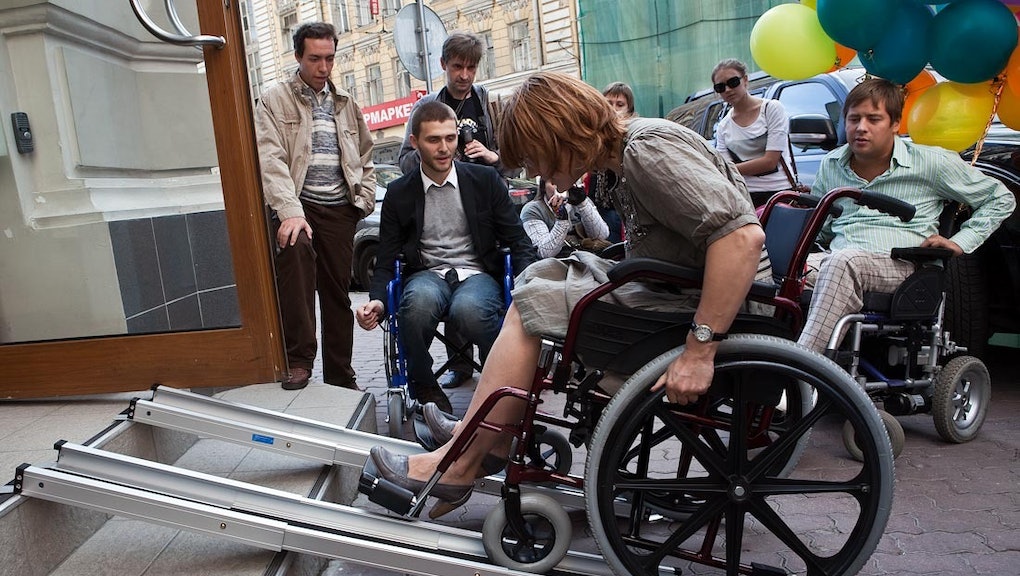 This March in Sochi, 78 Russian athletes will compete in the Paralympic Games – twice as many as in the 2010 Vancouver Games. That’s quite the feat for a country that in 1980 refused to even host the Paralympic Games. As a Soviet representative brazenly put it, “There are no invalids in the USSSR!”

Today, even as the Russian government builds state-of-the-art accessibility accommodations for its paralympic athletes in Sochi, many Russians with physical limitations face significant physical and discriminatory hurdles in their daily lives. A 26-year-old woman who uses a wheelchair told Human Rights Watch that she’s often stuck in her third-floor Sochi apartment building for several months because it’s only accessible by stairs.

People with disabilities, or "invalids," as the Russian language names them, are discriminated against by their employers and alienated in everyday life. The Moscow Metro system is a shining example.

In the past couple of years since Dmitry Medvedev signed the U.N.’s Convention on the Rights of Persons With Disabilities, Moscow has installed accessibility services in 19 Metro stations, but that's not nearly enough to make the commute easier for all disabled people. Plus, many elevators are poorly serviced. Metal rails for wheelchairs are scattered along stairway entrances, but more often than not the rails are so steep and slippery, it seems safer to try to wheel down the actual stairs.

A group of activists led by the magazine, “Bolshoi Gorod” (“Big City”), started an annual rally in 2009 called "“Access All Areas,"” in which hundreds of people, including famous journalists and actors, protested the city'’s shameful state of accessibility by trying to get around the center of Moscow in wheelchairs. Participants stuck "accessible” and “inaccessible” stickers on the outside of buildings depending on whether they could enter in a wheelchair. They ran out of “inaccessible” stickers on the first block.

The rally tried to cross Moscow'’s main Tverskaya Street using a newly installed elevator in 2012. The elevator broke on its third use, leaving the group stuck inside for hours. The mechanics who tried to evacuate everyone couldn'’t fix the elevator, so they had to wrench its doors open instead.

A whopping 80% of people with disabilities in Russia are unemployed as of 2012 official Russian government data. And according to the Human Rights Watch report, much of the focus on employing disabled people is on sending them to “special" institutionalized workplaces or homes that are isolated from everyone else.

Disabled citizens have historically been isolated by the Russian state, their physical differences kept under wraps. The practice of separating people with handicaps from “normal” society has roots in the Stalin era when, in which the dictator tried to keep disabled war veterans out of the public eye because their visible amputations were an explicit reminder that the Second World War was not all victory and celebration.

But under increasing international pressure in the past couple of years, Russia has slightly improved its accommodations. There are several private taxi companies popping up with spaces for wheelchairs. And in September of 2014, Russia has to be accountable to the U.N. about what it’s done after the Olympics to implement the Convention on the Rights of Persons with Disabilities.

In the mean time, Human Rights Watch says the current Russian federal law lets Russian governments use the budget as an excuse for not really implementing accessibility standards. That needs to be erased from the law. Human Rights Watch holds Russia responsible for changing these parts of the Russian federal disabilities law that keep the U.N. Convention from causing change to take place.

Can a country whose disabled citizens have trouble even getting out of their own apartment buildings morally root for its own ever-expanding Paralympic team? Sochi shouldn't just be a one-year deal. It should set a precedent for accessibility in all of Russia.