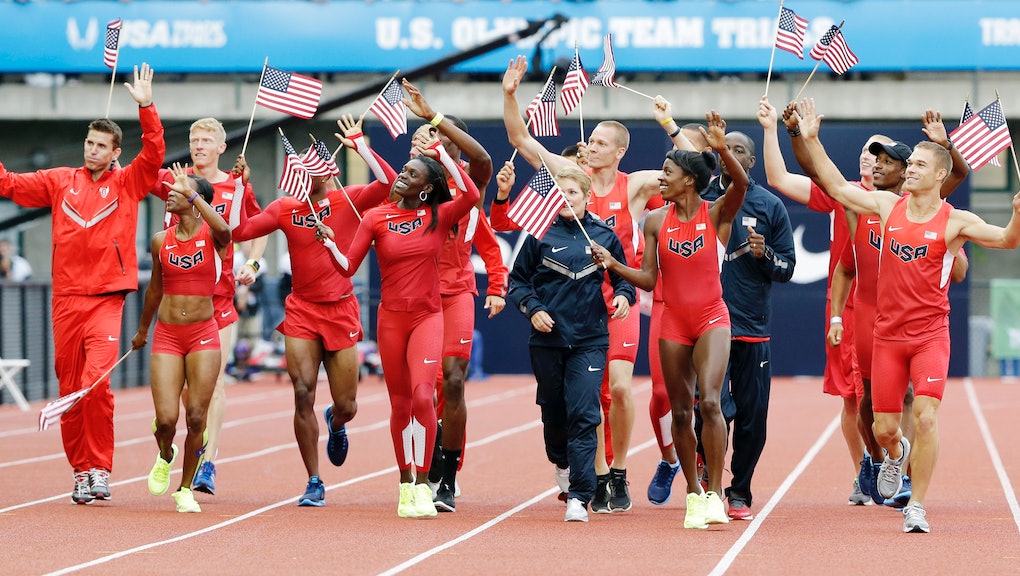 Looking Back at 60 Years of U.S. Olympic Uniforms

The upcoming winter Olympics in Sochi have already stirred up a media frenzy with threats of boycotts and bombings. But if we take a break to look at a lighter side of the games, what's truly going for the gold this year are the über-patriotic, patchwork-designed uniforms by Ralph Lauren.

Scene-stealing U.S. Olympic uniforms have been the tradition for decades, as we've sent our athletes off in style. Below is a list of the top 10 torch-worthy U.S. Olympic looks throughout the years.

Our Olympic team had major style even back in the 1950s. The uniforms sported an emblem of the New Oslo City Hall with the iconic Olympic rings and the text, "The 6th Winter Olympic Games Oslo 1952."

We taught the French a thing or two about style during the 1968 Winter Olympics. Reigning ice queen Peggy Fleming took home the gold for figure skating, and looked super chic while doing it in a uniform with large side buttons and an over-sized emblem.

This was the year of the deep red monochrome look for the U.S. Olympic uniforms. Bell-bottoms were also included, naturally.

Designed by Levi Strauss, the 1980 U.S. Olympic uniforms (in the middle) stood out from the crowd with their bold, all-over red. Did we mention that our underdog men's ice hockey team upset the favorite Soviet team favorite and took home the gold this year, too?

Debbie Armstrong, the first female U.S. gold medalist in alpine skiing, celebrated her win in a Levi Strauss-designed Olympic jacket. Strauss also created matching cowboy hats for the uniforms, which Debbie luckily forgot to wear during the parade thrown in her honor.

This is one Olympic uniform that we want to forget: cowboy hats, denim jeans and puffy track jackets weren't our proudest style moment. Even for the '90s, this look was barely bronze-worthy.

Christine Witty almost got lost in the too-high and wide collar of her 1998 U.S. Olympic uniform. Of course, she was celebrating her silver medal win for the women's 1000-meter speed skating event, so she probably didn't care.

Oh Canada! Canadian fashion company Roots was the creative driving force behind the 2002 Olympic uniforms. Is it just us or does the design on the jackets suspiciously resemble a maple leaf?

The late Jeret Peterson looked stylish and sleek in the Ralph Lauren-designed jacket, ski pants and boots during the 2010 Winter Olympics. The repetitive monograms on the ski pants were just preppy enough to cross the finish line in style.

Ralph Lauren out-Ralph Laurened himself with this year's Winter Olympics uniform, featuring a patchwork of a deconstructed American flag and a ton of over-sized stars. America the beautiful indeed.