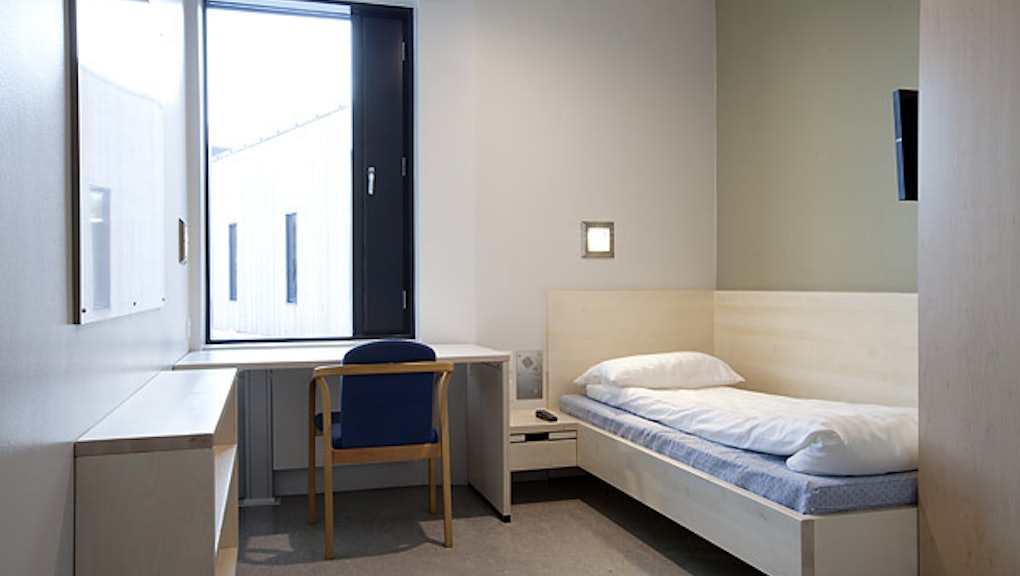 Prison systems around the world are generally predicated on a two-step system: Punish the crimes, rehabilitate the offender. Some countries like the U.S. tend to focus on the punishment. But Norway is a shining example of what can happen when the focus is put on the rehabilitation.

In Norway, there is no death penalty and the maximum sentence is 21 years, meaning that every prisoner will someday be released. Because of that, Norwegian Correctional Services design and run their prisons to help inmates grow, or at least not diminish, as people so that they might effectively rejoin society after their release.

"In the law, being sent to prison is nothing to do with putting you in a terrible prison to make you suffer," Bastøy Prison governor Arne Nilsen told the Guardian. "The punishment is that you lose your freedom. If we treat people like animals when they are in prison they are likely to behave like animals. Here we pay attention to you as human beings."

Located on Bastøy Island about 46 miles south of Oslo, Bastøy Prison is a prime example of this ethos. Cells have televisions, computers, showers and toilets. Prisoners have access to a variety of classes in general education and specific skill-training. Though the inmates are counted several times a day, they're given relative freedom — they work in stables, bike repair shops, timber mills or grow crops. There's even a prison band that performs regularly and was given permission one year to attend a ZZ Top concert.

Along with the island community that is Bastøy Prison, the recently built Halden prison is a sight to behold. Opened in 2010 with a 252 prisoner capacity, Halden seriously rethinks the system and puts a strong emphasis on rehabilitation over punishment. With amenities like a sound studio (where music classes are offered), jogging trails, a teaching kitchen and a freestanding house where inmates can host their families during overnight visits, Halden tries to recreate the outside world as much as possible so that inmates can easily and successfully make the transition back to life after their sentence. And what about the guards? It's about a 50/50 split between men and women, and none of them carry guns. In fact, they routinely eat meals and play sports with the inmates.

Image Credit: STATSBYGG via TIME. Halden rooms include en-suite bathrooms with ceramic tiles, mini-fridges and flat-screen TVs, in which it's more difficult to hide contraband than regular TVs.

Image Credit: STATSBYGG via TIME. For every 10 to 12, there's a common space where prisoners can relax after a day of work and prepare their own evening meals. And notice the windows: none of the windows at Halden have any bars.

Image Credit: STATSBYGG via TIME. A state-of-the-art recording studio offers inmates a chance to earn various instruments and potentially develop skills that can be used in the real world.

Image Credit: STATSBYGG via TIME. Even though inmates are confined to a closed space, Halden's architects kept many of the 75-acre site's trees to both minimize the imposing 20-foot wall and maintain a sense of real life nature.

Image Credit: STATSBYGG via TIME. Even though, Norwegian inmates lose their freedom, they don't lose access to state services like dentists, doctors and nurses. Halden houses a small hospital with a state-of-the-art dentist's office.

But the system seems somewhat effective, at least by the numbers. Within two years of release, as many at 60% of prisoners in the U.S. and U.K. end up back in jail. In Norway, that number is loser to 20%. At Bastøy specifically, it's just 16%.

"Killers like me have nowhere to hide," said Vidor, who at 72 is the oldest prisoner at Bastøy Prison. "If there was the death penalty I would have said, yes please, take me. [But prison] helped me to understand why I did what I did and helped me to live again."