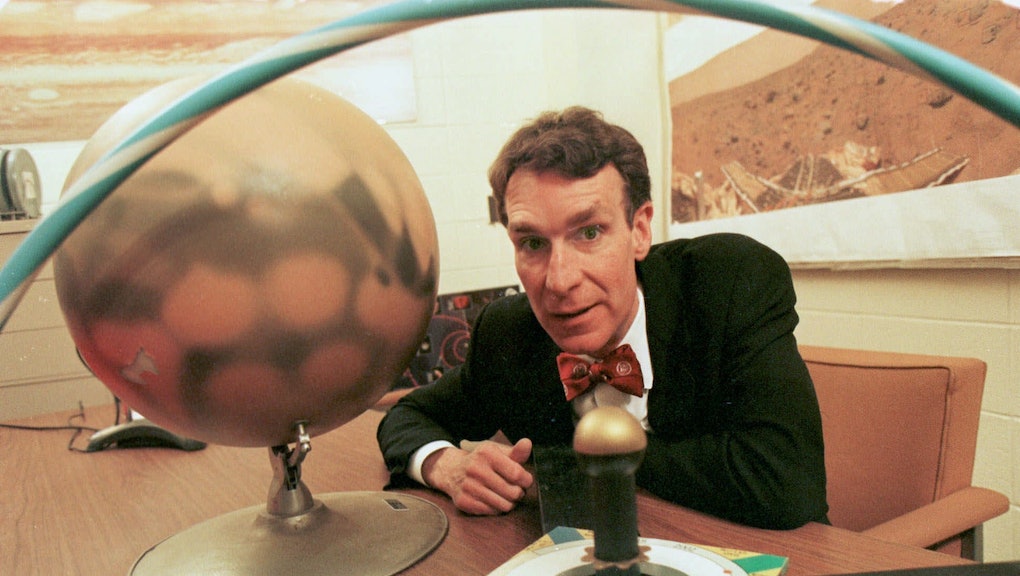 Last night, Bill Nye (science guy) debated Ken Ham (the creationist), for almost three hours. While it would've been boring if any other scientist had been talking to a creationist for that long, Nye won the crowd with his infectious enthusiasm and amazing ability to explain complicated things easily to anybody — be they children or creationists.

Only Bill Nye could create the perfect way to look at a solar eclipse with a cardboard box, some paper and some tin foil. The best thing about Nye's experiments was that you could almost always recreate them yourself at home. Generally not without risking serious harm to household pets, though.

Observe as Nye (dressed in a fantastic powder blue lab coat) attempts to bowl with a ping pong ball. And then, of course, there's the "Great Moments in Momentum" montage. And to think this show existed before the Internet was a big thing.

3. Nye explains the cosmos with soccer

If you really want to feel old, this was back when Pluto was still a planet. R.I.P. Pluto.

4. Nye explains ocean currents AND their etymology in two minutes

With just some food coloring, water, salt, beakers and infinite knowledge, Nye explains both ocean currents and even the Greek behind their thermohaline descriptor.

That's what I'd call a saline solution! (I'm so sorry.)

One of the best parts of any Nye episode is his never-ending supply of puns. The life-size DNA ladder is another highlight in this clip, along with the breakfast table lecture handled by the mom when the dad can't answer his son's gene-related questions.

A larger-than-life replica of an eyeball would be creepy if anyone else were explaining it to us. So would the disembodied voice talking to Bill throughout the demonstration. Yet somehow it all seems normal.

Static electricity, rock and roll and the Van de Graaff generator. Only Nye could make getting shocked and hair metal relate. He should've brought the wig back last night.

Nye explains magnetism through the only thing children care about: television. Also, no one ever mentioned the Southern Lights — Aurora Australis — except Nye. Maybe only he even knows about them? It seems probable that there are scientific phenomena only Nye understands.