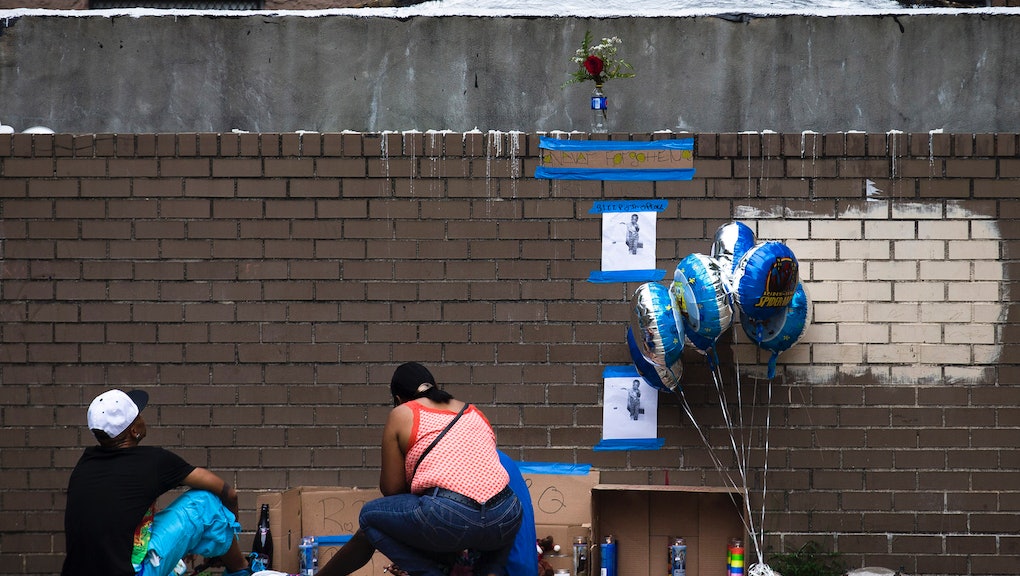 Violence in Some Neighborhoods Is So Severe, 30% of the Population Has PTSD

The prevalence of post-traumatic stress disorder (PTSD) among America's returning troops has been in the headlines for years. The lack of adequate mental resources for veterans led to public backlash, and the government has made strides in providing regular screenings and education on PTSD.

What's been largely forgotten, however, is that violence in some American neighborhoods is so severe that there's a growing number of PTSD cases in which the only battlefield the person has seen is the one outside their front door.

On Monday, ProPublica's Lois Beckett published a shocking report that shows how Americans can develop PTSD rates comparable to veterans of war.

"Americans wounded in their own neighborhoods are not getting treatment for PTSD. They're not even getting diagnosed," Beckett writes.

While the overall rates of PTSD are higher for veterans than an average American, that doesn't take into account differences within the U.S. According to the Department of Veteran Affairs, 7-8% of Americans suffer from PTSD, while that number is 11-20% of troops returning from Iraq or Afghanistan. But that figure fails to point out the differences in rates of PTSD between neighborhoods — especially when you consider race and socioeconomic factors.

To illustrate the point, Beckett brings up the Grady Trauma Project, a pilot study in Atlanta that has observed rates of PTSD primarily among "inner city, low socioeconomic status, primarily African-American subjects." The results of the study were shocking: researchers found that "over 80% of this population has suffered significant trauma and approximately 30% have PTSD."

And this information is not a new revelation either. Investigators at the Grady Trauma Project, along with other researchers at Emory University and Grady Memorial Hospital, published a study in 2008 on how "African Americans in low-income, urban communities" are especially at high-risk for trauma and PTSD. Among the most common traumas were "having relatives/friends murdered (47%), being attacked with weapons (64% of men), and being sexually attacked (36% of women)."

Countless studies have shown how race, socioeconomic status and violence are interlinked. Still, a graph like this, which shows how many shootings take place in different neighborhoods of New York City, is alarming. The plotted points are all shootings:

Black-on-black violence is also a major contributing factor to trauma in primarily African-American neighborhoods. A 2012 Wall Street Journal report also found that the vast majority of U.S. murder victims and perpetrators were black:

There's also a feedback effect; individuals with PTSD are less likely to find employment or improve their socioeconomic status. According to the American Psychological Association, "a lifetime diagnosis of PTSD was associated with a nearly 50 percent lower probability of current employment" and "veterans with PTSD were three times more likely to be unemployed."

What's even more troubling is that the incredibly high rates of PTSD in these communities are not being countered by adequate resources. "ProPublica surveyed a top-level trauma center in each of the 22 cities with the nation’s highest homicide rates. Just one, the Spirit of Charity Trauma Center in New Orleans, currently screens all seriously injured patients for PTSD," Beckett writes.

And it's especially hard to diagnose and treat children who have seen violence from an early age and developed PTSD. According to a 2007 report by the San Francisco Chronicle, "as many as one-third of children living in our country's violent urban neighborhoods have PTSD" — yet schools did not have the training or the resources to identify and distinguish PTSD from ADD and other disorders.

While it's important to make sure that our returning troops receive the mental health care that they deserve, it's equally important to keep in mind that the PTSD crisis in our own neighborhoods isn't being addressed. High levels of violence and the lack of adequate resources have created a perfect storm in our poorest communities, and it will not stop unless we do something about it.