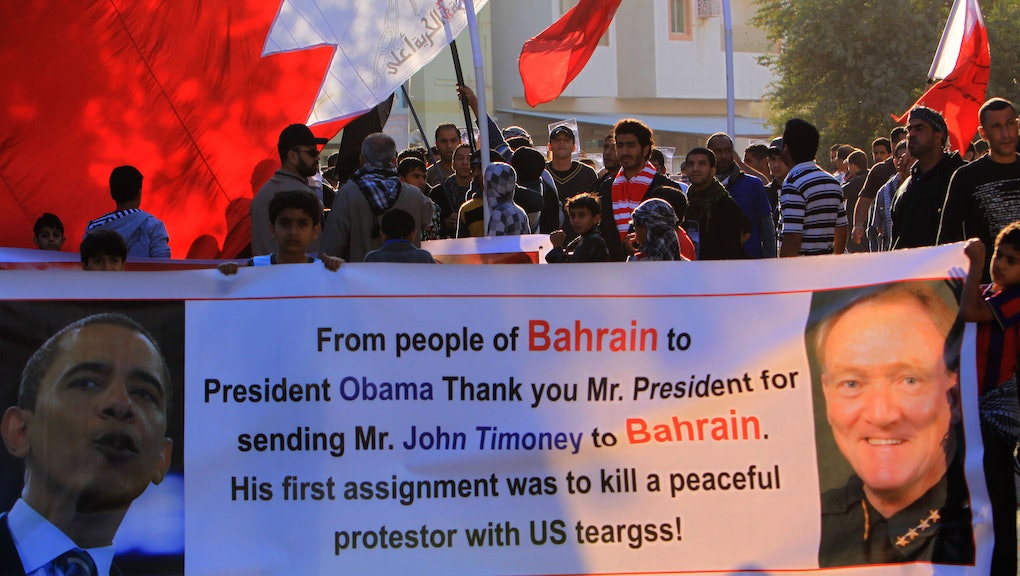 John Timoney has a face like a fist and a CV out of The Departed. He's been a cop in New York, Miami and Philadelphia. And now he's advising the Bahraini government on policing matters.

That's the Bahraini government, the one that gases, tortures and kills protesters as their preferred method of public order policing. And that's Timoney, who's been called "the worst cop in America" and faced hundreds of complaints over his violent approach to public order policing in the U.S.

The State Department has always insisted Timoney's appointment in Bahrain has nothing to do with them. The distancing is deliberate — human rights groups are scrutinizing the repressive regime closely.

Since the Bahraini government promised reform in November 2011, dozens more have died and thousands have been injured. Many are scared to go to a hospital for fear of being arrested. Amnesty International even accuse the regime of kidnapping and torturing children.

An email has turned up on Wikileaks showing the job opportunity that Timoney eventually took when he was promoted by an American "Regional Security Officer" who was stationed at the Bahrain Embassy five months before Timoney was appointed.

The officer, an employee of the U.S. government, had just discussed Timoney's future role with the Bahraini authorities and was sharing details about expected salary (about $300k plus benefits).

He even tells us how important Timoney's future position will be to the U.S. government.

"This position has the interest and support of senior U.S. government policy makers, given the strategic importance of our relationship with Bahrain and recent events here. It is seen as a prime engagement opportunity with a non-NATO major ally, hence my current involvement."

The State Department refused to comment on the leaked email, but back in 2012 officials had been pretty unequivocal when Timoney scored the job.

"This is a Bahraini Government initiative. [Timoney] is not working for or on behalf of the U.S. Government. So we're not able to speak to what in particular he's involved with."

In case you're wondering why the State Department took such a special interest in Timoney's appointment, it’s worth remembering the U.S. 5th Naval Fleet is bobbing away in Manama harbour, a stones throw from the ongoing unrest.

If Bahrain was ever to fall into full on revolution mode a la Libya, Egypt or Tunisia, a rapid, expensive and risky re-location would be in order, jeopardising the fleet, potential operations in Syria, Iran or Iraq, as well as ongoing anti-piracy activities in the Indian Ocean.

Is Timoney the "worst cop in America?" I think that’s unfair, but commentators in the Guardian and the Miami New Times disagree. Crime — particularly drugs, homicide and corruption — in cities such as New York, Miami and Philadelphia dropped sharply once Timoney arrived.

The ACLU has filed seven suits against him over his policing of a major protest in Miami in 2011, accusing him of deploying excessive force and illegal tactics, but their Executive Director also said of Timoney: "He was probably one of the most professional, competent and experienced police chiefs the city of Miami ever had." The Philadelphia Inquirer and Esquire Magazine have both praised his "street cop" approach.

But despite his abilities in criminal policing, Timoney has serious flaws when it comes to policing protests, or put another way: doing his job in Bahrain.

As a 55 year old police chief in Miami, he rode his police bike into a crowd of placard-wielding activists and started a fight with "the bigger guy." He also stopped to yell at another group of protesters "Fuck You! You're bad!" (not the most eloquent of cusses). Frankly bizarre behaviour for an otherwise professional cop.

In January 2012, he casually dismissed the Occupy movement as an irritating traffic problem, an argument that's since been used to justify violent dispersal of protests in Bahrain.

Bahrain uses teargas indiscriminately, and even more so since Timoney arrived. Rather than its conventional application as a crowd dispersal tool, policemen have started using it as a weapon. Officers have entered opposition villages at night and fired canisters into sleeping households. Over 30 deaths have occurred due to misuse of teargas.

But Timoney loves teargas. He loves it so much that in 1994 he voluntarily teargassed himself to demonstrate to civil liberties groups that it was better than knocking someone over the head.

Timoney isn't the only Westerner advising the Bahrain government. John Yates, an ex-Deputy Commissioner at London Metropolitan Police, is also providing consultancy services. Both Yates and Timoney were appointed in December 2011.

Similar to the State Department's initial stance on Timoney's position, the U.K. Foreign and Commonwealth Office has denied anything to do with his appointment. And if they are lying, as the State Department clearly was, it wouldn't be the first time.

Colonel Ian Henderson CBE, who worked as a security adviser to the Bahrain government for 30 years, was accused of complicity in torture during the '90s, leading to an investigation by British authorities in 2000. The investigation was concluded in August 2001, and no charges were filed. Henderson died at age 86 in April last year still denying he had anything to do with the torture dungeons his offices were just four storeys above.

The British government had always denied their involvement in his appointment until Scottish investigative journalist Ian McKay uncovered secret Foreign Office documents showing how senior British diplomats had persuaded the ruling Sheikh Khalifa (the current Sheikhs father) to appoint Henderson and allow him to establish the brutal state security apparatus which is still largely in use today.

In a statement to PolicyMic, the U.K. Foreign and Commonwealth Office maintained their position despite the U.S. State Department leak, but did admit that the Embassy had met with John Yates, as part of their policy to meet those "who are assisting the Bahraini Government with their reforms."

John Horne, a researcher with Bahrain Watch and the man who unearthed the incriminating email, told PolicyMic:

"It is hard to see what John Timoney has achieved in Bahrain beyond a healthy bank balance. After two years, torturers still torture, police still use excessive force, citizens still suffer collective punishment from tear gas, and the security forces still act with impunity."

John Timoney has not responded to a request for comment.