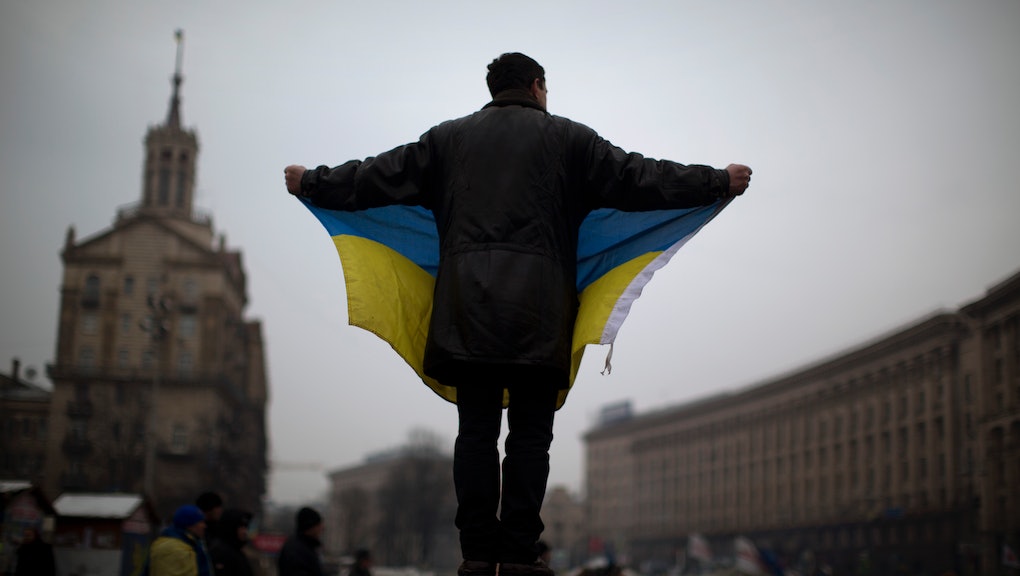 Make No Mistake: After Sochi, Putin's Coming for Ukraine

Here's how one scenario might play out: Putin waits until we have all left Sochi with our ice dancing and bobsled medals in tow. Only then do his eyes refocus on Ukraine where, he will say, the country's 8 million ethnic Russians are calling for protection from nationalist Ukrainian zealots. The ensuing Russian military invasion happens swiftly; it begins in Crimea, on the northern coast of the Black Sea.

To imagine the Russian Federation using military force to stamp out Ukraine's "Euromaidan" — the mass protest movement that began in November, when Ukrainian President Viktor Yanukovych ditched a planned association agreement with the European Union — is still to engage with far-fetched fiction.

Sort of. On Thursday, a Kremlin top dog accused the United States of "unilaterally and crudely interfering in Ukraine's internal affairs." He warned that, in response, Moscow might intervene to maintain "the sovereignty and territorial integrity" of its former Soviet republic. Putin adviserr Sergei Glazyev did not go into tactical details, but he did urge Yanukovych to clench an iron fist: "As for starting to use force," Glazyev mused, "In a situation where the authorities face an attempted coup d'etat, they simply have no other course of action. Otherwise, the country will be plunged into chaos." Ostensibly, fifth columns abound.

Let us not forget that Ukraine's woes are largely a Russian foreign policy affliction. Weeks before Yanukovych decided, at the 11th hour, that closer union with Europe was not in his country's best interests after all, he flew to Moscow for a clandestine meeting with Putin. It was shortly thereafter that Yanukovych reversed course, citing a need to "normalize relations with Russia." Euromaidan began as a contest between Moscow and Brussels, but its purview is far broader now.

For several years, Putin has been cobbling together a rival to the EU: a so-called "Eurasian Union," to be unveiled by 2015. Kazakhstan and Belarus are already on board. Armenia and Kyrgyzstan are likely to follow soon. Putin has spoken of "a single historical destiny" for Russia's former Soviet republics. But Ukraine is the clincher, the sweetest spoil. It's one that Moscow will not give up without a fight.

It seems more prudent to envision a Russian stamp-out (à la Russia's 2008 involvement in South Ossetia and Abkhazia) than to throw up one's hands and cry "Yugoslavia!" as some observers have done. The latter scenario implies that Ukraine will collapse inwards into ethnically-charged civil war, which is unlikely. The former acknowledges Russia's heavy hand. Already, Kremlin advisers have alluded to a future division of Ukraine along East-West lines with West going to Brussels and the East joining with Moscow.

In the meantime, as an uneasy Olympics unfolds, we must watch Russia. Writing in the New York Times, historian Timothy Snyder listed three potential warning signs of Russian escalation: a ramping-up of Russian propaganda referring to Ukrainian protesters as Nazis, a quickness to blame Olympic-related terrorist violence on Ukrainians and a build-up of Russian forces along the Ukrainian frontier.

But we should not be too shortsighted — at the expense of Eastern Europe. Might I suggest a glance towards Moldova? In September, Russia's Deputy Prime Minister Dmitry Rogozin threatened to cut of Moldova's gas supply this winter if it continues on its pro-EU economic course: "We hope," said Rogozin to Moldavians, "that you will not freeze."