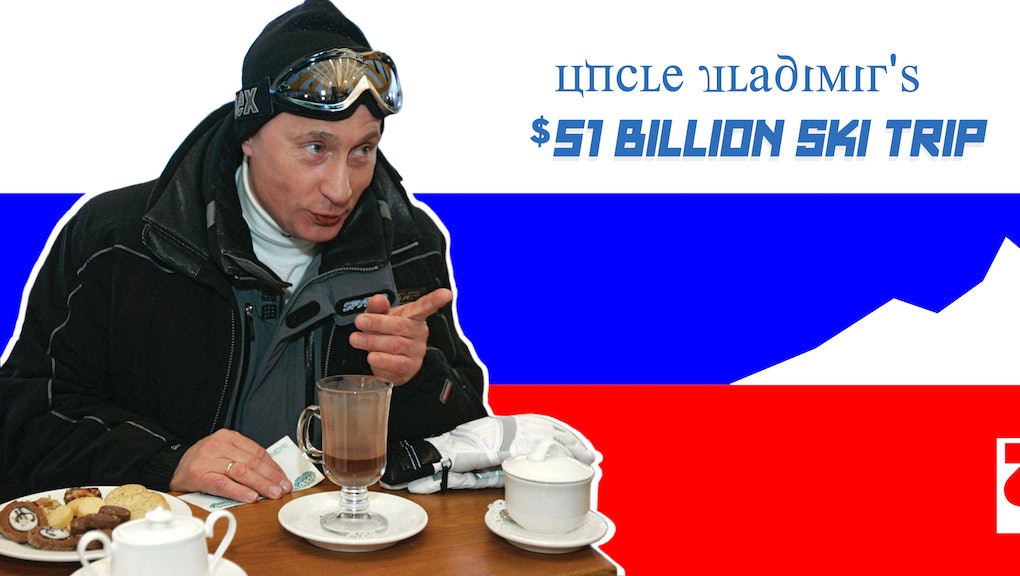 There are curiosities and there are absurdities. And then there are blasphemies, for which the funds spent on the Sochi Winter Olympics offensively qualify.

In its my-dick-is-bigger-than-yours wisdom, the Russian government has sucked out $51 billion from its citizens in order to put up the government version of a mafia wedding. No expense has been spared, no practicality left unhinged and cash-stuffed envelopes are of course the gift of choice. It's $8 billion more than the already over-the-top coming-out party China threw itself in 2008, otherwise known as the Beijing Olympics, and it's three and a half times more than London's (relatively) ghetto games in 2012; a mere $13.9 billion.

That only starts to put it in perspective. $51 billion exceeds the national budgets of three-quarters of the world's countries and comes in at a sliver less than the Czech Republic's. It's 60% more than that of The Philippines, a budget covering nearly 100 million people.

One could argue that Sochi differs in that the entire infrastructure had to be built from scratch. And while it's true that roads, stations and airports had to be constructed, it's fairly assured that the only enduring thing about these Olympics will be the bank accounts of those with a tentacle in the mix. A bigger feeding frenzy there will never be.

Now then, let's get to the important matter of putting that $51 billion to more practical use.

In the spirit of the Winter games, it seems fit to do a one-day ski trip for as many people as the budget allows. And if we're gonna do it, let's do it right and hit a sweet spot like Colorado's Vail Mountain. Don't worry about a thing, 'cause Uncle Vladimir's gonna take care of not only your full-day lift ticket, but also skis, boots, polls and one hot chocolate.

Naaaaah, this can’t be right. Is this coffee decaf or something? Because my brain doesn't seem to be working. Let me try again.

Okay, unless I've totally lost it, this is actually correct. And yet a part of me refuses to actually believe it, and won't, until these numbers are attacked by strangers on the internet. Please, do your thing ...

But assuming accuracy for the time being, it's enough cash to equip and treat 358.64 million people to a fine day of skiing at one of America's best ski resorts. As it happens, it's more than enough to bring the entire combined populations of both the United States (313.9 million) and Canada (34.88 million).