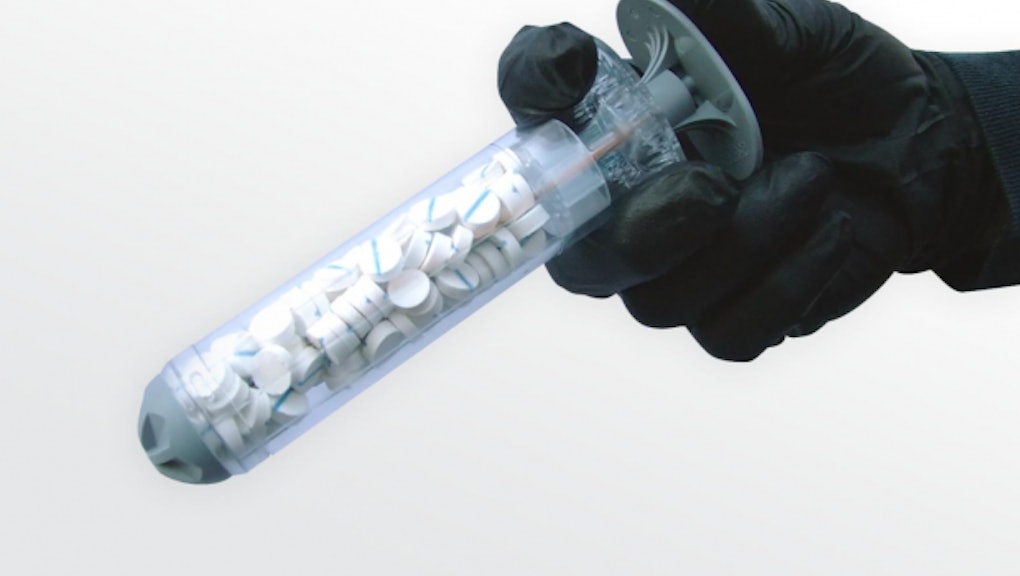 A Simple New Invention Can Seal a Gunshot Wound in 15 Seconds. Here's How.

The news: Meet XStat, a medical device that has the potential to change emergency and battlefield medicine forever.

The concept is simple: Using a pressure applicator, the device injects a group of small, rapidly-expanding sponges into a wound cavity (such as those caused by gunshot or stab wounds) and rapidly seals it. In the wound, the expanding sponges create enough pressure to rapidly slow the pace of bleeding and allow clotting to occur. It's demonstrated statistically significant results in testing with swine, and according to the company, created "a large reduction in blood loss, resuscitation fluid requirement, and medic treatment time."

And it's so simple that pretty much anyone can use it to stop major trauma. As The Blaze says, it's "literally ... plug-and-play."

RevMedX, its creator, notes that uncontrolled bleeding is the primary cause of death on the battlefield and the second leading cause of death in cases of civilian trauma.

A report from the National Center for Biotechnology Information says that the highest percentage of survivable battlefield deaths from 2001-2009 came from major trauma hemorrhage, exactly what the device is supposed to stop it in its tracks. In potentially survivable cases of hemorrhage, the areas bleeding were the torso (48%), extremity (31%), and junctional regions (neck, axilla, and groin) (21%). Those statistics are what led the report to recommend new developments in arrested bleeding. MedRevX believes that their product is the solution:

"A significant number of wounds occur to regions of the torso where compression cannot be applied, such as the pelvis or shoulder … By working closely with the US Army Medical Research and Materiel Command and US Special Operations Command, we succeeded in developing a novel hemostatic dressing capable of stopping high-flow arterial bleeding within seconds without external compression."

A Department of Defense researcher on hemorrhagic wounds, Dr. Anthony Pusateri, says X-STAT "is a capability that has never existed before, and can be used in the field setting by medics, possibly even with buddy aid."

The researchers originally tried using foam, but the blood pressure was so high that it just poured the injected material all out. Finally, they settled on a sponge constructed from wood pulp and covered in chitosan, an anti-microbial coagulant harvested from shrimp shells.

The device is a game-changer when it comes to survivable trauma. Previously, all medics responding to gunshot wounds could do is stuff gauze into the wound — a horrifically painful process that needs to be repeated if the bleeding fails to cease within three minutes. According to former U.S. Army Special Operations Medic John Steinbaugh, it's so painful that "you take the guy’s gun away first."

And that process doesn't create enough pressure to seal wounds. "Gauze bandages just don't work for anything serious," says Steinbaugh. X-STAT could change all that.