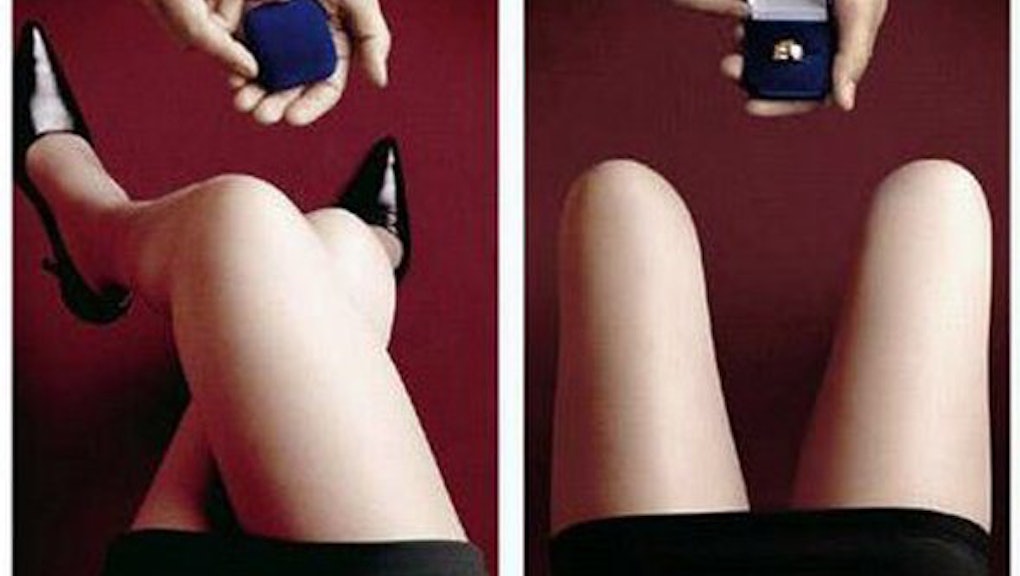 Love it or hate it, Valentine's Day is nearly upon us. And with each Feb. 14 comes a new batch of cringe-worthy advertising that exploits men and women's frighteningly high expectations of one another, reinforces sexist attitudes, undermines love in favor of sex and is often just plain lazy.

These aren't "just ads," either; they're selling ideologies that perpetuate stereotypical gender norms and social roles, and it's important to look at them with a critical eye. So settle in with a box of Russell Stover chocolates and check out 13 of the worst offenders. (And when you're done, take a stand by telling advertisers that you're #NotBuyingIt.)

Most women want to look and feel great on a V-day date, but this advertisement reinforces an idealistic beauty standard. It pushes expectations that women constantly need to look a certain way (and need to buy products to help them accomplish this), and that big boobs are the ultimate marker of sexiness.

Give and you shall receive! In Telefora's 2012 Super Bowl spot, model Adriana Lima reminds viewers that relationships are transactional: If you send a woman flowers, she owes you sex. Get ready to pay up, ladies.

Nothing like douching your vagina to start Valentine's Day, right? This ad not only reinforces unnecessary and often unhealthy feminine hygiene norms, but it also can't even bring itself to actually use the "V" word — scary vaginas are relegated to euphemistic status only.

Can you feel the love tonight? This Brazilian company really lays the sentiment on thick by suggesting that giving a woman jewelry is a guarantee to get you laid, or at least a great way to convince a woman that she should sleep with you. (After all, it is what you're owed. See: No. 2.) It also pushes the idea that an engagement ring makes a woman and her body symbolic property of a man.

Not to worry, though; Natan is an equal-opportunity sexist. It has also released ads that are offensive to men and pretty much everyone.

A man clad in white stands in contrast to a sea of red in this ad for a feminine hygiene product, sending the clear message that periods are impure things that must be overcome. By treating periods as unclean and curse-worthy, the ad contributes to ideology that shames women's bodies. There's also the representation of a male expectation of sex on Valentine's Day ("I paid for this room, therefore we must have sex in it, and I will help you outsmart your disgusting uterus!"), as well as male authority over a woman's body; the intended consumer isn't even pictured.

Bloody awful: Another Tampax message that having your period is ruinous to having a good Valentine's Day. When will advertisers get over the notion that menstruation is something to be embarrassed about or ashamed of?

"Delightfully tacky yet unrefined" or just plain tasteless? There's nothing wrong with being frugal for a Valentine's Day meal, but this ad's insinuation that chicken wings — to be eaten surrounded by scantily clad waitresses, no less — are a substitute for an engagement ring is just a grim prospect for a romantic evening. Hooters is perpetuating two falsities: that women are expect a ring on Valentine's Day, and that it would be funny to give them something as cheap as possible instead.

Like many of these ads, Nakshatra wants us to believe that all women are after material items from men on Valentine's Day, and treats women's bodies as commodities that can be bought with expensive jewelry or lingerie.

Make her feel special this Valentine's Day with an engagement ring you ordered online that comes with cheese sticks. Pizza Hut isn't offering the "perfect proposal;" it's offering the greasy opportunity to buy into the unrealistic expectations of Valentine's Day.

This British lingerie and sex toy company thinks that women are expected to be sexy in a very particular way (i.e., in fancy lingerie) and "give" men sex on Valentine's Day. But sex isn't something to be given, or taken — it's something to be shared.

Happy phallic reminder that Valentine's Day isn't about love or romance — it's about sex! More specifically, as is seen once again in Radio Corazon's ad, the male expectation of sex. With such a visual representation of penetration, this promotes the idea that sex isn't so much about mutual pleasure than it is about dominance.

Haircare brand Schwarzkopf's ad is another spot with phallic imagery front and center. Its message is a bit jumbled — it seems to imply either that if a man uses more hair wax, it means he's more attracted to a woman, or that women need to be conventionally groomed and stereotypically sexy in order to be found attractive. This is lazy marketing: It seems the company just wanted to use euphemistic visuals to imply that Valentine's Day is about male-focused sex.

This guy probably ordered his engagement from Pizza Hut. Budweiser's ad tries to express that romance and expectations on Valentine's Day are silly and overrated, but does so at the expense of both men and women, implying that men are cheap idiots, that women need or expect to be romanced and that giving a woman something of little value is funny. #NotBuyingIt