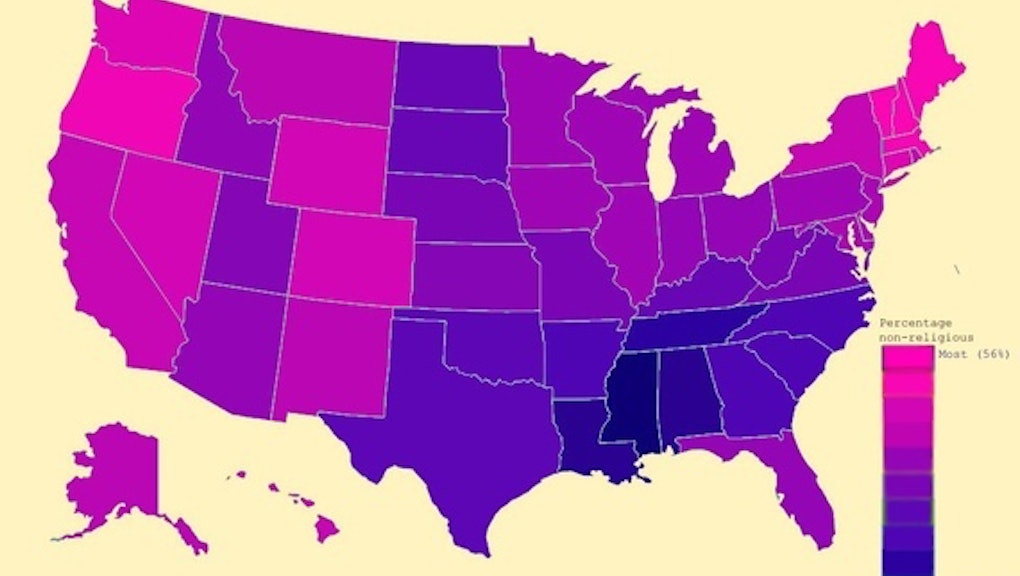 Use This Helpful Map to Avoid America's Religious Nutjobs

The news: The American road trip is a rite of passage. Sadly, that road is filled with sweaty preachers, Jesus camps and aggressive bean pie salesmen (if you're lucky). So what if you'd rather avoid your fellow Americans' wacky religious views?

You're in luck: This colorful map visualizes which states are the most and least religious.

The background: The percentages behind the map have altered little since Gallup started collecting data in 2008. Mississippi remains the most devout state, with 61% of residents identifying as "very religious." On the other hand, Vermont remains the closest thing to an atheist-agnostic paradise, at 56% "non-religious." The most fervent believers are concentrated in the Deep South, with the Northeast and the West Coast containing the highest percentages of non-religious residents.

There are also notable outliers: North and South Dakota are very religious compared to other Midwestern states, while Florida is a bunch of godless heathens compared to their Bible-thumping neighbors. Utah's strong Mormon population makes it the most religious state west of Texas.

The map avoids denominational specifics, but census data from 2010 confirms your suspicions: Christians are the overwhelming majority.

Catholics (1,231) and Southern Baptists (1,217) constitute the practicing majority in the highest number of counties nationwide. Methodists (244) and Evangelical Lutherans (155) are a distance third and fourth. Counties popular with the "Other" categories (95) are relatively scarce. And the nation's 10 most "Bible-minded" cities are located in the South, while 8 of the 10 least Bible-minded are on the West or East Coasts.

But where should you go? For the agnostic or atheist, the least upsetting road trip would run from Southern California through Washington state. Wear earplugs as you cross Idaho's northern tip. Montana down through New Mexico should be fine, but you’ll want a friend to smother you with chloroform repeatedly from there to Connecticut. Head north from there. You should be OK.

If you're very religious, please just stay in the South. Please.