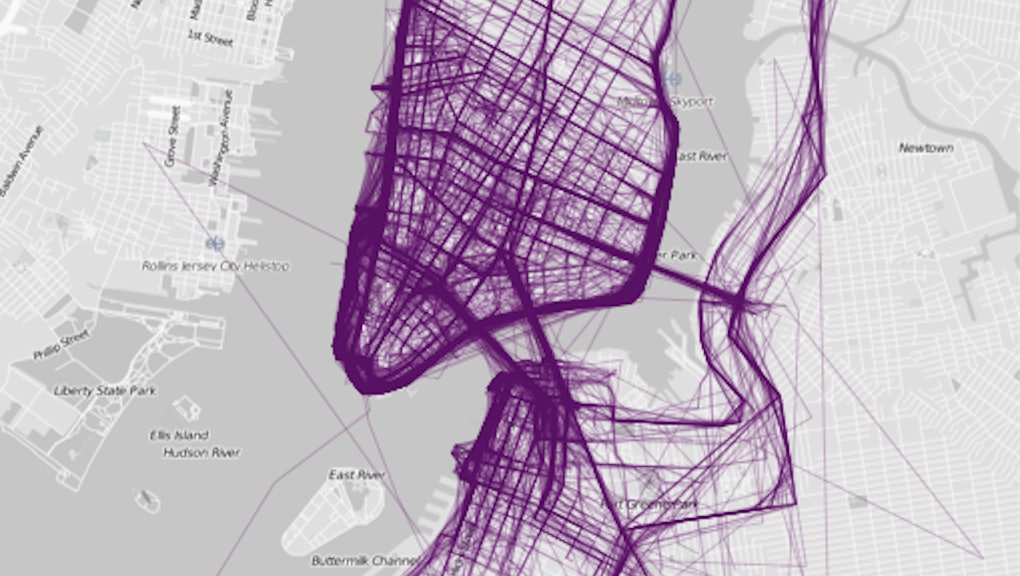 These Mesmerizing Maps of Where People Jog Reveal Something Telling About Major U.S. Cities

From FlowingData's Data Underload comes these beautiful and oddly entrancing maps of jogging and cycling routes across major metro areas, traced by the Runkeeper cycling app. See select cities below:

But as the Washington Post alleges, these aren't just maps of the best places to go jogging. They're also maps which clearly match up very closely with the neighborhoods of rich and poor people in those cities.

Note, for example, there aren't many people using Runkeeper in London south of the Thames, or in Boston's South Side, or anywhere in New York but the financial district, the richest parts of Brooklyn, and the Upper East Side (exception: some people do appear to be crossing through the South Bronx to use the bridges there). Scenic D.C. is rich with routes; southeastern D.C. less so. The farther you get away from rich coastal San Francisco, the less people are jogging. It goes on and on.

As "Know More" notes, the correlation isn't unexpected: Richer people tend to prefer living near parks and rivers, which are also the best jogging spots. And the poor are less likely to spend their money on "rich people" things like expensive smartphones or fitness apps. (I'd also argue that fitness tracking of this manner tends to be a bourgeois affectation.) But what's clear is that fitness and class status tend to be correlated.

A more in-depth article in The Atlantic argues that while the link between poverty and obesity is poorly understood, we can take away some major points.

"... Poverty might make some people obese, but obesity definitely makes many people poorer, through two broad channels: (a) it reduces take-home pay, particularly for women; and (b) it's related to health conditions that reduce discretionary income, too." Black women in particular are victims of this trend."

What we do know: People who are overweight are more likely to be poor and sick, and vice-versa for all three factors. But we don't know quite how these pieces all fit together, making it a difficult challenge to isolate what factors public health agencies and governments should focus on when fighting obesity and encouraging fitness.