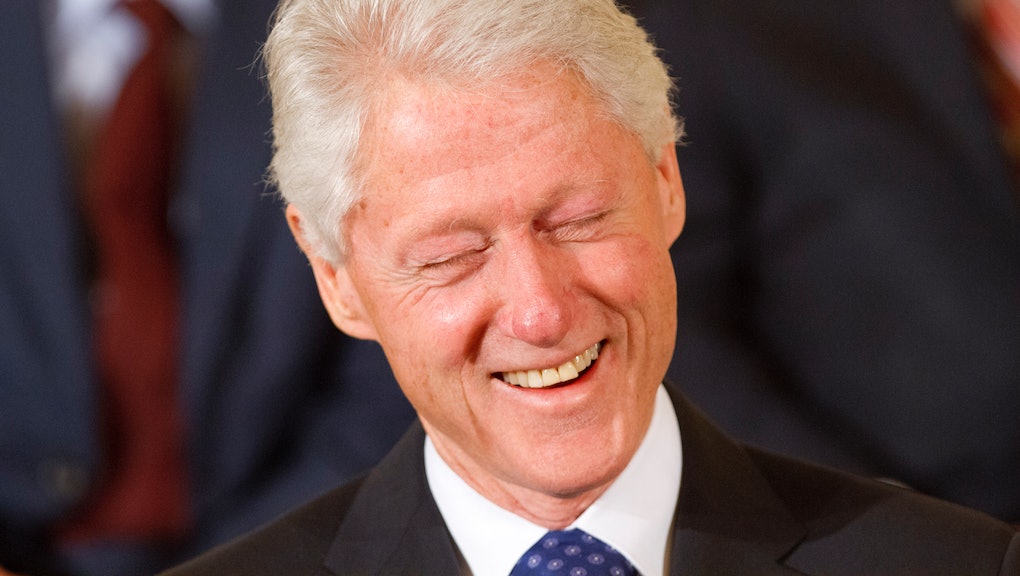 Did Bill Clinton Really Have An Affair With a Bombshell Actress? Here's the Real Story.

The news: In a bombshell tape leaked to entertainment journalism site Radar Online obtained via a "joint investigation" with The Globe, actor Tom Sizemore appears to brag that then-President Bill Clinton flew actress Elizabeth Hurley across the country to sleep with him in the White House in a room next door to Hilary Clinton.

The claims have been circulating heavily on right-wing media, including the Drudge Report, which showed these headlines:

According to actor Tom Sizemore, it all started during a 1998 White House screening of Saving Private Ryan, after which Clinton pulled Sizemore aside from the group of celebs to see the Lincoln Bedroom.

"We walk in," Sizemore says on the tape, when suddenly Clinton cuts to the chase. "Did you go with Liz Hurley for four years? Do you still see her?"

Then it gets hilarious: Sizemore confirmed that they were no longer dating, and the president asked him for her number. When he refused, Clinton said "Give it to me. You dumb motherfucker, I'm the Commander-in-Chief of the United States of America. The buck stops here. Give me the damn number."

He immediately called Hurley, saying: "Listen Elizabeth, this is the president. I don't have any time for this shit. I'm keeping the world from nuclear war all the time. I'm sending a plane to pick you up."

The president turned to Sizemore and said, "I'm going to say I asked you about your uncle, Ted Sizemore, who played professional baseball. That's the lie. Don't forget it.”

The reality: If you believe that, I've got a bridge to sell you in Amsterdam.

First of all, the story doesn't make any damn sense. President Clinton calls Tom Sizemore a "dumb motherfucker?" He's called Slick Willie for a reason. And according to Sizemore, Clinton was flying famous actresses out to the White House in 1998, when he might have been more worried about Kenneth Starr than getting laid.

Here's what Hurley has to say about it:

Now even Sizemore is reneging on the story:

"I'm not denying that I said these things … I don't remember saying them. They're the rantings of a guy, and it's been well-chronicled, who had a very severe drug problem."

"I've been clean of drugs for coming up to five years."

"It feels crummy to have to go through this but those were the choices I made back then and it's coming back to haunt me now."

"I chose to do those drugs. I hope there's not anything else out there."

"I want to apologize to [Hurley] and the Clintons for any hurt I've caused them."

He also says that a woman attempted to blackmail him for the tape, but he refused to shell out the dough. With some creativity, we can imagine that's how Radar Online got the recording in the first place.

The bottom line: Your bombshell revelations probably shouldn't come from an investigation on Radar Online that partnered with the Globe, you silly goose. (Of course, similar websites like The Dirty have wrecked other people's executive ambitions, so you never know.)

But you really shouldn't believe something you read on the Drudge Report about Bill Clinton. I'm beginning to suspect they have a grudge with him, or something.