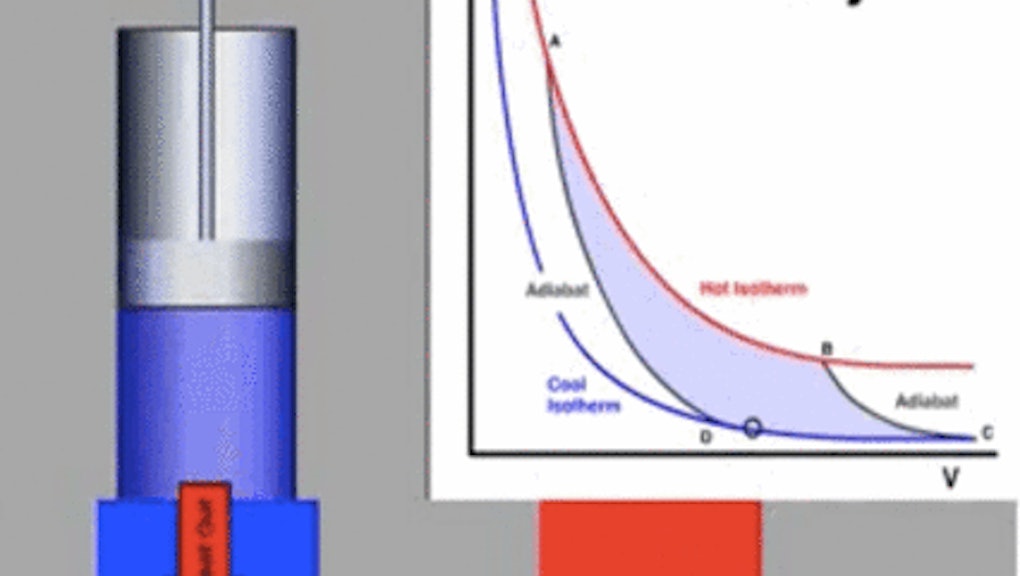 A feat of engineering: German physicists in Johannes Rossnagel’s lab at the University of Mainz have just built the world’s smallest engine that runs on a single atom. The engine is less than a micrometer in length, making it the tiniest one invented.

Powered by quantum mechanics, the engine maintains a high level of energy, and is so efficient it breaks a long standing theoretical limit for engine efficiency. A normal heat engine — say from a car or a coal-fired power plant — is usually only around 25% efficient. The atomic engine can reach 4 times it's normal energy output, maximizing its efficiency.

How does it work? Although it seems that such an amazing feat of engineering should be hopelessly complex, the atomic engine is actually based on one of the simplest conceptual engine designs, the Carnot heat engine. A heat engine acts by transferring energy from a warm region of space to a cooler region. In this process energy can be converted to do mechanical work. This cycle can then be reversed in order to do more work.

In the atomic  engine, a single calcium ion is used for this energy transfer process. It is held in place by a cone of electromagnetic energy called an ion trap. To create the energy cycling process, at the narrow end of the cone the atom is shot with a laser. This energizes the atom’s electrons causing the atom’s size to expand. When this happens, the atom pops out from the warm, narrow end and travels to the wider end of the cone. Here it encounters a cooling laser, causing it to return to the narrow end for the cycle to be repeated.

In effect, the system creates mechanical energy just like a gasoline-powered piston, except that you don’t need to add gas to keep the whole process going, the lasers do that.

There’s one other trick: the system is built so that it can detect when the atom is located at the narrow end. The engine then reacts by contracting the EM cone, putting the atom into a quantum “squeezed state”. This squeezing is like turbocharging the engine, adding more energy and making the atom pulse as it races to the cool end. This trick makes the engine an amazing 4 times more efficient, demonstrating a strange quirk of quantum mechanics where the system seems to break the theoretical limit for the possible efficiency of a heat engine.

Image: Visualization of an atom shot with a Quantum Laser Camera (ronenv.com)

Will it have a practical use? Surely with such an unbelievable energy efficiency and an amazingly submicroscopic size, the atomic engine is set to change all technology as we know it, right? Sadly, no.

Observations in the quantum world do not scale to similar effects in the macroscopic world. And while the atomic engine in itself is extraordinarily efficient, the lasers used to power it by contrast are significantly inefficient. And although the engine is small, the size of the apparatus used to control it — including the lasers, electromagnetic fields, and recording devices — is huge.

On the extremely encouraging side, the knowledge generated from these experiments will be very useful for creating quantum computers in the future. A couple of key problems for advancing this technology is understanding how to control the movement of energetic particles that are suspended in a quantum state, and how to do that as efficiently as possible. By helping us to understand more about the behaviour of atoms, this model engine could eventually help manipulate the quantum world.