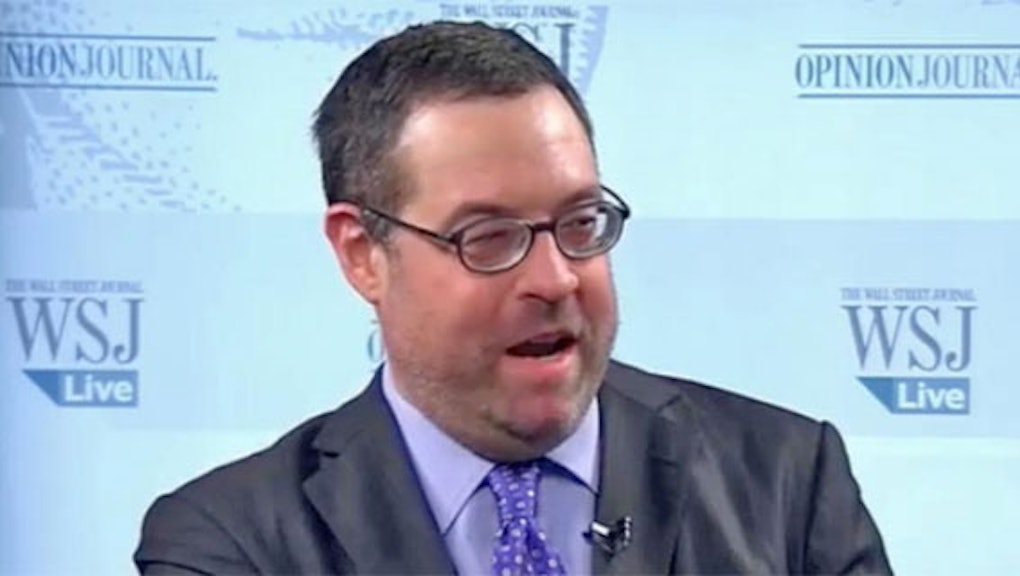 Thought Emily Yoffe telling women to prevent rape by staying away from booze was a bit victim-blamy?

Behold the Wall Street Journal's James Taranto, who thinks women who are victims of rape while intoxicated are rapists too. He calls the fact that we believe a woman shouldn't be blamed for a rape, even if she was intoxicated, a "double standard."

Taranto is known for making offensive comments about the epidemic of sexual assault in the military. He has called it "an effort to criminalize male sexuality," and posits that if you happen to be drinking before you were sexually assaulted, you'd better expect to be blamed for it.

In his piece, Taranto complains, "Women, but not men, are absolved of responsibility by virtue of having consumed alcohol." Yeah, ladies are the worst! Always using their drunk vaginas to scam men into raping them! If you're not keeping up, don't worry, he comes up with an equally confusing analogy comparing rape to drunk driving to make sure his argument makes no sense at all:

"Which points to a limitation of the drunk-driving analogy. If two drunk drivers are in a collision, one doesn't determine fault on the basis of demographic details such as each driver's sex. But when two drunken college students "collide," the male one is almost always presumed to be at fault. His diminished capacity owing to alcohol is not a mitigating factor, but her diminished capacity is an aggravating factor for him," he writes.

Cool story bro! But rape, unlike drunk driving, is a crime that cannot be fully understood without taking first considering its gendered permutations. We live in a world where almost 90% of rape victims are female, which makes the drunk driving analogy useless. As Hannah Groch-Begley at Media Matters points out, even when males are the victims of rape, men perpetrate the crime 98% of the time. So not mentioning that rape is predominantly perpetrated by men is like failing to mention that crimes perpetrated by the Klu Klux Klan were mostly committed by white supremacists.

But nice try trying to sugarcoat your misogyny with logic puzzles! If a train goes 25 miles an hour and it collides with another train at 20 miles an hour, you're still a sexist scumbag.

What Taranto described as the "double standard" is what most people refer to as "reality." The female vulnerability to rape is not something feminists like to believe in. It's something really hard to ignore unless you are out of touch, which Taranto demonstratively grapples with.

I wish I could ignore the harsh realities of the world we live in like Taranto does in his essay.  I wish we didn't live in a world where one in five women in college will be the victim of sexual assault. I wish we didn't live in a world where men are taught that rape is funny, god-given or a woman's fault. I wish victims of rape didn't have to rely on a justice system that has been historically biased against women, and continues to be today. According to RAINN, only 3% of rapists will ever see a day in jail. But instead of talking about this injustice, Taranto spends most of his article addressing the terrible danger of false accusations, even though those only make up 3% of cases (similar to other crimes like burglary of theft).

And if you still have trouble grasping the fact that false sexual assault accusations are infrequent, perhaps some impressive number-crunching from Charles Clymer will convince you. Men are 32 times more likely to be struck by lightening and five times more likely to win $10 000 in the lottery than to come across a woman who wrongly accuses them of rape. If you're a dude, you are also 27,500 times more likely to be raped than falsely accused of rape. The disproportionate attention that men's rights activists like Taranto place on false accusations is not only distracting, it's disingenuous. It's not only bad for women, it's bad for men too.

If you're upset, you can sign the Change.org petition calling on the Wall Street Journal to fire Taranto. They shouldn't fire him because he's a bigot with a shallow understanding of how the world works. He should be terminated because his words justify acts of violence towards women and girls. Taranto doesn't only justify the actions of rapists, he gives them impunity — something they already enjoy. If journalists are getting fired and suspended for being racist or homophobic, why shouldn't their jobs be in jeopardy when they're sexist? Now that's a double-standard I'd be interested in talking about.