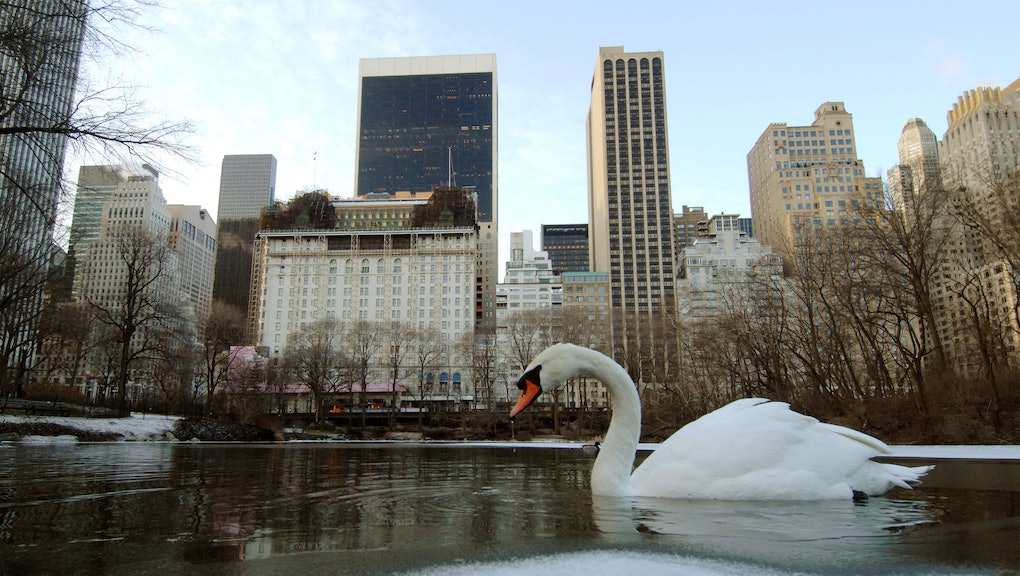 While Sochi is Killing Dogs, New York is About to Exterminate Thousands of Swans

Many are outraged about the killing of stray dogs in Sochi — but there is a similar crisis closer to home.

In a move that has shocked residents, the New York Department of Environmental Conservation announced plans last month to kill all 2,200 of the state's mute swans — and to get rid of all swan nests and eggs to prevent a future population. It's sparked a major disagreement over whether to aggressively protect native species or allow ecosystems to change.

The announcement comes on the heels of a DEC study released last December that expressed concerns over mute swans and "their rapidly increasing numbers and potential impacts on other waterfowl, natural ecosystems and people." The new plan would get rid of the entire population of mute swans in the state by 2025. The birds would "either be shot or captured and gassed; eggs on nests would be oiled, which keeps them from hatching."

Since the "swan genocide" plan was introduced, it has been met with resistance. Media outlets like Vanity Fair have criticized the decision, and there is a Change.org petition with over 20,000 signatures to stop the plan from being implemented. On Monday, the New York Daily News published an op-ed by Jeffrey Kramer, a volunteer with GooseWatch NYC. "The plan is fallacious and insidious, another misuse of taxpayer monies to promote killing and molestation as a wildlife management science," Kramer wrote.

But some environmentalists and bird-watchers are in favor of the plan because the mute swans are considered a threat to native birds. The DEC site describes the mute swan as "a non-native, invasive species, brought to North America from Eurasia for ornamental purposes in the late 1800s." It also points out that mute swans consume a lot of aquatic vegetation, displace native fowls and displays territorial and aggressive behavior during nesting season.

"We have an obligation to sustain native species. The question then is, 'At what level?' But in the case of introduced species, I don't think we have that same obligation," said Bryan Swift, a DEC specialist and a lead author of the extermination plan.

Despite the fact that mute swans have been a part of the New York landscape for centuries, they are still considered less of a priority than the native species. The question is, does that mindset unfairly influence studies like this? Scientists say yes. A 2011 article in the journal Nature examined systemic bias against non-native species, with 19 ecologists pointing out the need to embrace changing "novel ecosystems."

The new announcement also fails to point out that the DEC study actually found that the current population control measures are pretty effective, and that "The total number of mute swans in New York State is projected to be relatively stable." Between 2005 and 2012, the state shot 500 adult mute swans and destroyed 2,500 eggs, leading to "a statewide population decline of approximately 2.5-3.0% per year during our study."

But apparently that's not steep enough of a decline for the DEC. The agency is expected to announce a final version of the proposal later this year. As a token, it is also considering letting a few private owners keep mute swans — as long as they are not allowed to reproduce or stray away from the property.

The DEC is accepting public comments on the plan via mail, phone or email until Feb. 21. Let 'em know what you think!