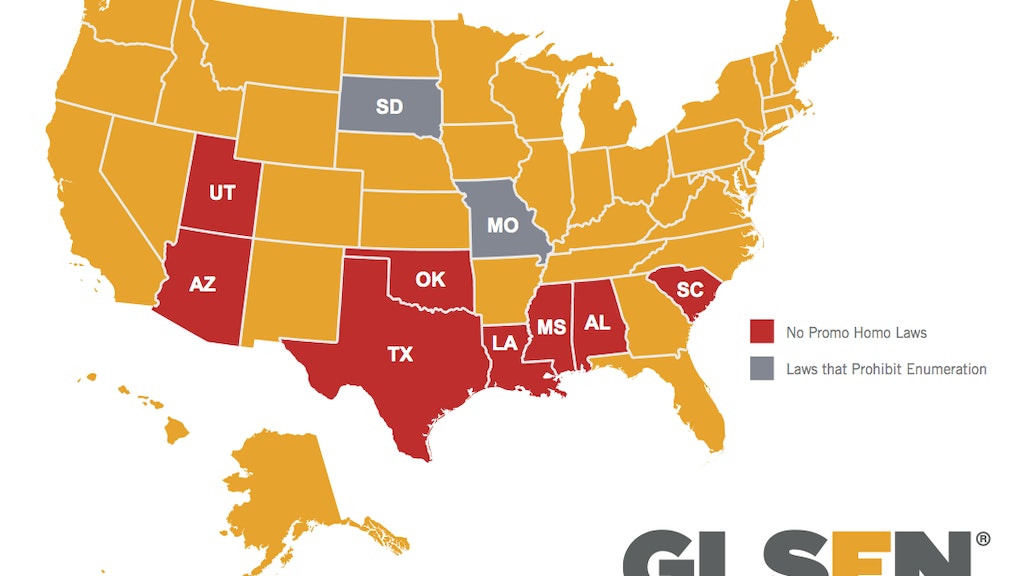 8 U.S. States Have Anti-Gay Laws Strikingly Similar to Those in Russia

The Winter Olympics' opening ceremonies may be scheduled for Friday night, but the world’s eyes have been turned toward Russia and the host city of Sochi for some time now. While there's plenty to attend to, from Pussy Riot’s advocacy for free speech to Sochi's lack of preparation for the games, protests against Russian laws banning gay "propaganda" — including merely suggesting that it's OK to be gay — have, rightly, taken center stage.

While the situation in Russia is dire, it's hardly the only place to have instituted a law banning "gay propaganda." In fact, as a map from the Gay, Lesbian & Straight Education Network illustrates, eight U.S. states — Alabama, Arizona, Mississippi, Louisiana, Oklahoma, South Carolina, Texas and Utah — have laws banning the promotion of homosexuality in schools.

The map makes it clear that when it comes to changing regressive laws designed to silence LGBT individuals and render them invisible, there's plenty of work to be done at home.

As a Washington Post article details, the U.S. anti-propaganda laws range from stifling speech to actively promoting fear and misinformation in schools. Arizona and Utah, for instance, ban teachers from casting homosexuality in a positive light, while states like Alabama and Texas take things a step further, requiring educators to describe homosexuality as abhorrent to the general public and as a criminal behavior. (It's not — or, at least, it hasn’t been for a decade now. The United States belatedly legalized sodomy in 2003, a full decade after Russia did so.)

Let's be clear: the situation for LGBT individuals and allies in these eight states is nowhere near as perilous as that on the ground in Russia. For one thing, while the eight states' so-called "no promo homo" laws are preposterous, they're limited to restricting speech and instituting a chilling effect in schools. Even so, that doesn't excuse Americans from taking action against our own restrictive and intolerant policies, and setting an example for Russia and the world. Perhaps the Sochi Olympics can serve as a call to action not only against Russia's bigotry, but toward ensuring tolerance and freedom of speech both at home and around the world.