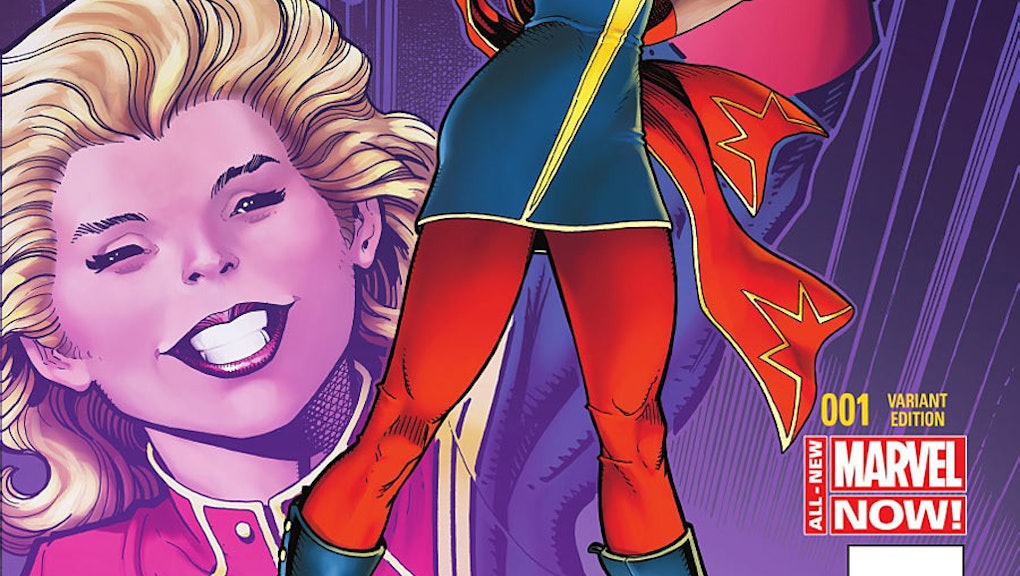 The release comes loaded with expectations: Like every major “first,” Khan will bear the burden of representing her entire culture in a medium where she remains an anomaly. But she’s up for the challenge: for years, the media has told absurdly limited stories about Muslim women. It portrays them as passive victims who lack agency and power. Khan’s existence challenges these notions, and unleashes a fresh new voice onto America’s cultural landscape. But is it working?

You be the judge:

Marvel dropped these preview panels before the official release date. They highlight Khan’s personal life before her powers kick in, and so far they look great: she’s an incredibly likeable 16-year-old with a sweet and enthusiastic personality. Her main struggles involve reconciling the parameters of a religious upbringing with her natural quirkiness – she writes nerdy online fan fiction in her spare time, and loves the forbidden smell of non-halal meats. Readers also get a sense of Khan’s family life, including a loving mother who doesn’t quite understand her daughter’s oddness.

Kamala Khan is the fourth protagonist in the Ms. Marvel series, which follows the exploits of various young female superheroes and villains. Her arrival highlights Marvel’s goal of “[reflecting] the growing diversity of its readers.” “It is so important that we tell stories that reflect the ever-changing world that we live in,” said series editor Sana Amanat, “and being a Muslim-American is so much a part of that.”

How Khan reflects our changing world is important. The idea came about when Amanat discussed her own upbringing with senior editor Steve Wacker: "He was interested in the dilemma I faced as a young girl,” Amanat said, “and the next day he came in and said, 'Wouldn't it be great to have a superhero that was for all the little girls that grew up just like you, and who are growing up just like you are today, and to create a character they can be inspired by[?]'" From the beginning, Khan was meant to disrupt American notions of who can and cannot be a superhero.

It’s a laudable concept, but the burden of representation is a heavy one. Being the “first” anything requires a special kind of bravery, and Kamala Khan will have to be better than her peers to earn their respect. What’s even more troubling is this: Until more female Muslim-American superheroes join her on the frontline, the burden will be hers alone. How long will she be able to fight this battle unaided?

Have no fear — if the above panels are any indication, the future is safe in her hands. Khan already looks like a worthy heir to the Ms. Marvel throne. But she’s clearly more than that: her existence is an affirmation for anyone who doesn’t fit the status quo, whether Muslim-American, female, or otherwise.

"It's for all the geek girls out there, and everybody else who's ever looked at life on the fringe," said series writer G Willow Wilson.

One can only hope Khan is just the beginning, and a promising sign of things to come.