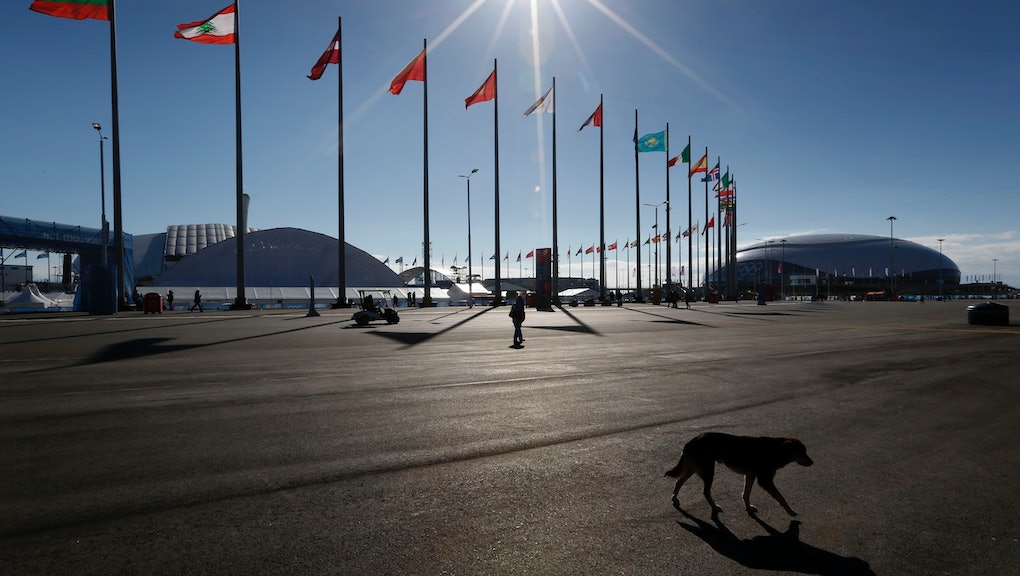 Why is Everyone Talking About Stray Dogs in Sochi? Here's What You Need to Know.

Countless Tweets and reports from the Russian mountain resort have focused on the dogs and their plight:

But far worse than the problem of stray dogs is the local authorities' plans on dealing with them. As the clock raced towards opening day on Friday, the official plan became clear: Exterminators were going to kill all of them.

Some hundreds of dogs have already been destroyed, and one advocate estimated that the death toll may be 5,000-7,000. A Russian billionaire's efforts to rescue the strays may have been too little, too late.

"We were told, 'Either you take all the dogs from the Olympic Village or we will shoot them,'" said Olga Melnikova, who is co-ordinated a humane capturing operation on behalf of the Russian charity Volnoe Delo. Another animal lover acting independently, local dentist Vlada Provotorova, says that she and her friends were only able to save less than a hundred of the dogs.

The company in charge of disposing of the canines does not share her concern for animal welfare. "Let's call things by their real name,” owner Alexei Sorokin told ABC News. "These dogs are biological trash."

"Imagine, if during an Olympic games, a ski jumper landed at 130 kilometers an hour [over 80 mph] and a dog runs into him when he lands. It would be deadly for both a jumper and for the stray dog," said Sorokin. "I am for the rights of people to walk the streets without fear of being attacked by packs of dogs … [they] must be taken off the streets even if that means putting them to sleep."

The Humane Society International argues that the killings are not only cruel, but ineffective. They claim capturing and sterilizing the dogs is a more effective long-term option. Others have noted that killing the dogs might only remove the most visible (and thus human-friendly) canines, letting other, more feral dogs fill the niche.

Volneo Delo's operation, meanwhile, has managed to shelter 100 dogs from the slaughter — perhaps a scant reprieve in comparison to the vast numbers of dogs being destroyed. And it's not clear if they will be able to find a home after the Olympics ends and attention fades.

"This is not really what we need; it's only the solution for three weeks," co-ordinator Nadya Mayboroda told USA Today. "But we're caring for them and looking for owners for them. We're not going to stop caring for them when Olympics finish. When all journalists go, we're here and doing it. I'm not stopping."

But don't expect any of Sochi's authorities to lift a finger to help the city's remaining dogs. "After the Olympics," said Provotorova, "They won’t do anything about it."