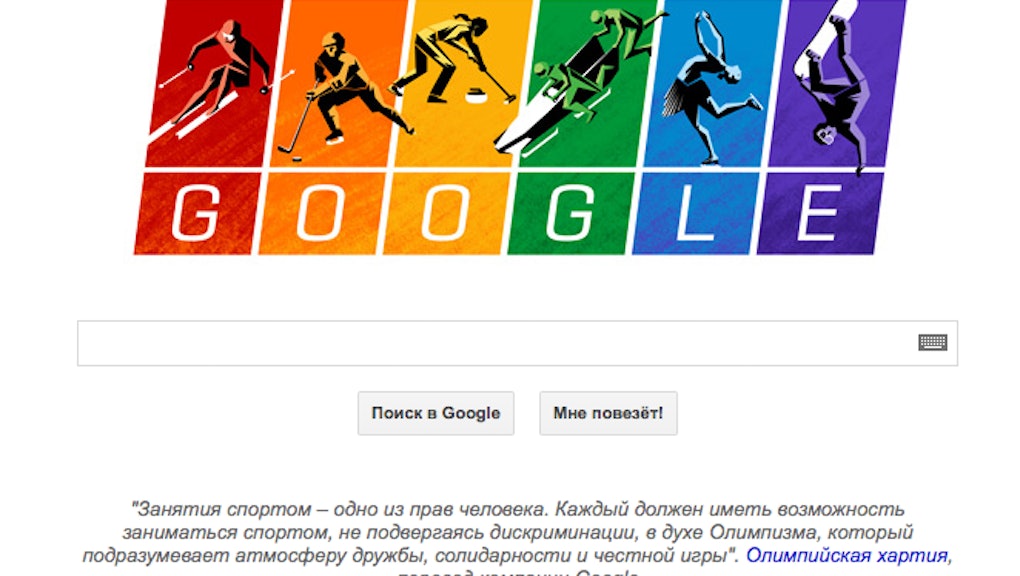 The news: The latest Google doodle contains a not-so-subtle message for opponents of Russia’s anti-gay propaganda laws: We support you.

In honor of the Sochi Winter Olympics, the tech giant changed its homepage logo to reflect the egalitarian spirit of the games. Not only does it feature athletes doing what they do best, it places them before a set of rainbow-colored panels. To underline their point, Google added this telling quote from the Olympic Charter:

“The practice of sport is a human right. Every individual must have the possibility of practicing sport, without discrimination of any kind and in the Olympic spirit, which requires mutual understanding with a spirit of friendship, solidarity and fair play.”

The background: Google is not the first major company to express its support for the LGBT community at the games. U.S. Olympic Committee sponsor AT&T did so more definitively this week when it issued a statement saying, “We support LGBT equality globally and we condemn violence, discrimination, and harassment targeted against LGBT individuals everywhere.” The move came at the request of the Human Rights Campaign, which has been urging Olympic sponsors to stand up to Russia’s discriminatory policies. "AT&T should be recognized for showing true leadership in opposing this hateful Russian law,” HRC said, “and other sponsors that have failed to lead should take corrective action immediately.”

Google’s move has been applauded by various outlets and LGBT supporters, but its legal status in Russia remains unclear. The Russian law prohibits all “propaganda” that supports so-called “nontraditional sexual attitudes,” even online. “If a foreigner uses the media or the internet to engage in propaganda, the fines increase to 50,000-100,000 rubles or a 15-day detention with subsequent deportation from Russia,” reads Article 6.21 of the Code of the Russian Federation on Administrative Offenses. Whether the doodle qualifies remains to be seen.

The takeaway: Google’s decision is the latest in a considerable wave of backlash against the Russian law. Now that the games have officially begun, it will be interesting to see how this policy gets enforced. One thing is certain: Russia has its hands full.